Life is a Highway: A Century of Great Automotive Writing 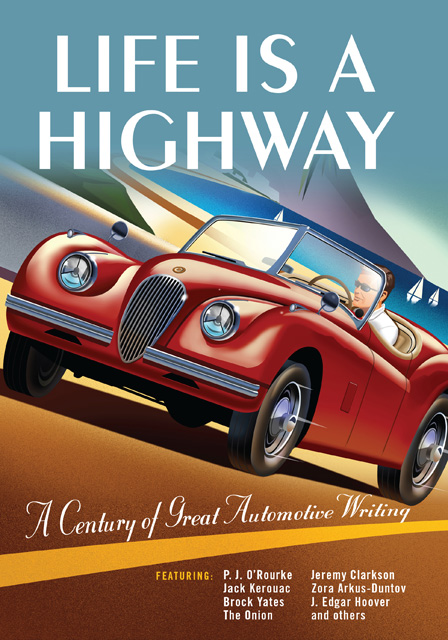 Just as Tom Cochrane’s 1991 most famous song of the same name has been covered by others (Chris LeDoux, Richard Petty, Rascal Flatts) this book presents “covers” of a common theme. It is an anthology—a word you don’t hear much anymore—of 44 examples of ruminations about anything automotive, from excerpts from novels to magazine articles ranging from the quite serious (such as a 1952 piece by FBI Director J. Edgar Hoover on car theft) to the frivolous (the pressing problem of bladder relief while driving. And the solution is not even remotely what you were thinking!).

Compiled by two Motorbooks editors (Holmstrom has co-/written over a dozen books on cars and motorcycles), the book does what anthologies do best: show a little bit of everything.

“But in order that the motor may cease to be injurious and become beneficient, we must build roads suited to its speed, roads which it cannot tear up with its ferocious tires, and from which it will send no clouds of poisonous dust into human lungs.”
—Anatole France, in L’Île des Pingouins (1907)

Fiction, science (no science fiction though, such as utopian novelist Chauncy Thomas’ remarkable 1878 book The Crystal Button: Or the Adventures of Paul Prognosis of the Forty-ninth Century let alone the even more obvious Jules Verne), racing, road rage, dream cars, speed limits, first car, traffic court—whether your interests lie in the historic or the wordsmithing, chances are that something among the five topic areas will strike a chord. Anthologies, however, have a cardinal weak spot: the size of the sample, which more often than not is directly related to the depth of the editors’ reading list. Despite the book jacket’s breathless insistence that the book “includes the most significant writings and musings about the automobile ever recorded” from “around the world,” these claims are simply hubris. Sure, some of the marquee names are here—Setright, Purdy, O’Rourke, Kerouac et al—joined by a chorus of lesser ones, but, really, there are many more and it is a disservice to them and to literature to imply otherwise. Moreover, all examples here are pulled from only English-language material by North American and British writers (ergo no such goodies as the French quote above), utterly deflating the claim of this being a global take on the cultural and societal manifestations of automobility. (And that, dear reader, is fertile ground and an anthology yet to be compiled outside the world of academia.)

No matter, just because there are more fish in the ocean doesn’t mean the ones on display here aren’t plenty colorful in their own right. The oldest item in this book is an 1895 snippet from an anonymous writer in The Horseless Carriage magazine. Both the language and the sentiment are distinctly of their time and therein, ultimately, lies the appeal of a book like this. What was once exotic/new becomes commonplace and will become exotic/old to our successors. Old man Heraclitus of Ephesus (pre-Socratic Greek philosopher c. 535–c. 475 BCE) meant to express much the same thing in his famous saying, “You cannot step twice into the same river” or Πάντα ῥεῖ (panta rhei) “everything flows,” as in “all things are in constant flux.” And a philosopher’s mood is what you will want to be in as you read this book. Some things are sharply profound, others barely rise to the level of platitude, all meant something to the people who wrote and selected them.

The few photos are by and large generic but the nice cover art by David Moore is specific to the book as are the several pieces of b/w line art by prolific Argentine-born motorsports artist Hector Cademartori.