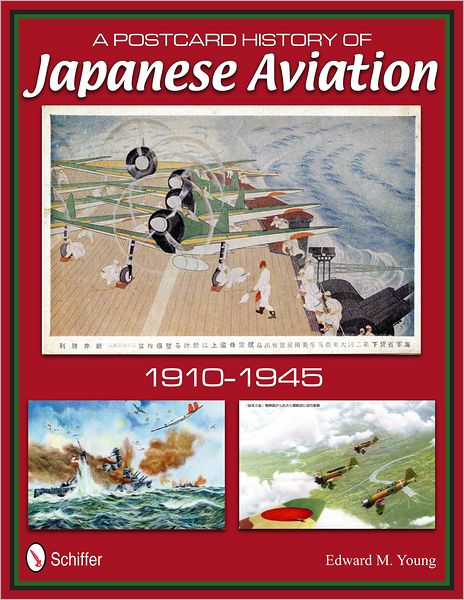 “Japan made extensive use of postcards as a vehicle for propaganda aimed at both a domestic and a foreign audience. The postcard was an inexpensive, easily distributed means of conveying images and content supporting attitudes the Government wanted the Japanese people to adopt.”

Examining a subject, any subject, by means of looking at postcards is less about a fully exhaustive, balanced, or possibly even representative study but rather an exercise in getting a sense of the wider context, the fabric of societal stirrings into which the subject is embedded. This book, which employs this approach, thus ought to appeal as much to the aviation enthusiast as anyone interested in Japanese culture as well as, in this case, anyone with an eye for various quite distinct Japanese artistic styles.

If you deduce from the author’s surname that he himself is not Japanese, you’d be right, but, having lived there for many years he is fully immersed in the subject and also sought the assistance of native postcard and aviation experts to translate photo captions and the like and to help identify specific aircraft or locations. Certainly at the time of its writing, this was the only book on the subject. Young, a retired financial analyst who found his way into aviation via model airplanes he assembled as a youngster, has written several aviation books for Osprey.

All images included here are from Young’s own collection, representing about a third of it. Divided into four chapters they depict the four principal eras of Japanese civil and military aviation, mostly the latter. Also shown is the occasional aviation-themed envelope, postage stamp, or cancellation mark. After some preliminary comments about the role of the postcard—not only in Japan—as a communications tool, each chapter is introduced with several pages of fairly intense, fact-laden narrative (commendably with nary a typo in the transliterations) that lays out the overall theme and highlights. This is then followed by a wealth of illustrations, extensively captioned and as well reproduced as the source material allows. In most cases, any one type of aircraft is shown in several consecutive illustrations (both photos and drawings), providing a sense of order that is especially welcome as there is no Index. Not only aircraft are shown but also crew and ground activities, including even Western figures that had an influence on Japanese aviation such as, say, US pilots Art Smith or Katherine Stinson (here depicted in a Kimono).

The book paints a rich, rich picture and will offer even the experts new insights and certainly new imagery.

Schiffer books often have cover boards that replicate the outsides of the dust jacket; this one goes a step further by reproducing even the jacket flaps which means you can remove the dust jacket entirely for safekeeping/collectibility without any loss of information.