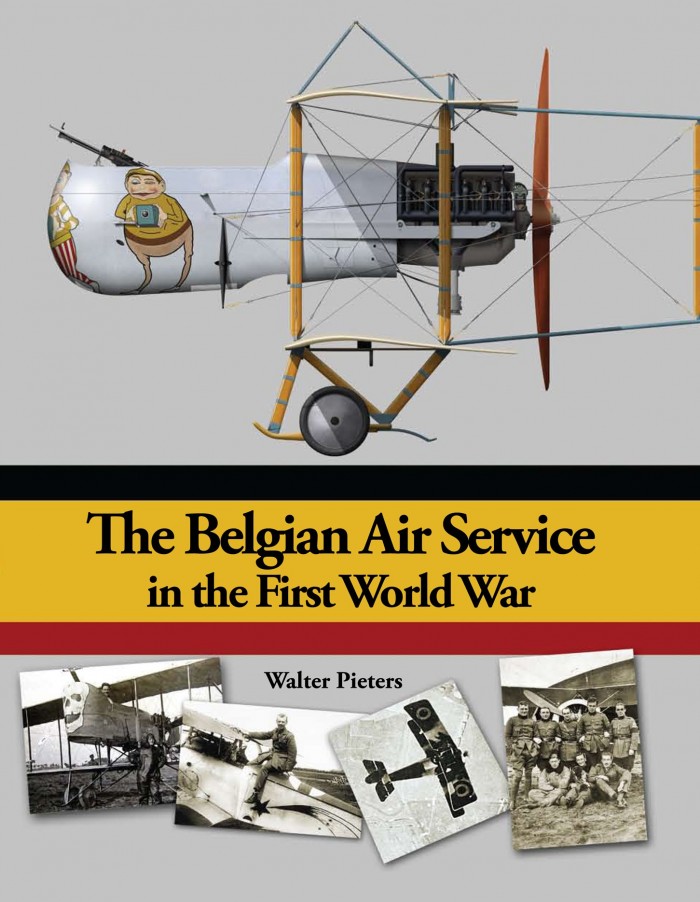 “Rumour has it that on 5 August, Adjudant Henri Crombez in his Déperdussin chased a German aircraft with his Browning pistol, without result. . . . Of course you needed a lucky shot to claim a victory, using a light gun in one hand and the joystick in the other.”

Only a few weeks later another Belgian aircrew did down a German plane—with a rifle, which would have marked history’s first air-to-air combat victory, if anyone had bothered to claim it.

While the subject is not exactly Hollywood blockbuster material, it is a plenty important chapter in aviation history because neutral Belgium, small as it was, had one of the world’s first air forces. This imposingly large book tells the story of its origins and WW I activities with such thoroughness that it is hard to imagine that it could be bettered, save by the never-ending discovery of micro facts. On the big picture scale the book is already recognized as the definitive treatment. 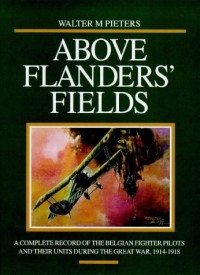 It wasn’t long after publishing his too-short book Above Flanders’ Fields: A lormplete Record of the Belgian Fighter Pilots and Their Units During the Great War, 1914–1918 (ISBN 978-1898697831) in 1998 that Belgian aviation historian Walter Pieters decided that the world would be a better place if not only the Belgian fighter pilots but the entirety of the Belgian Air Service were properly recorded for posterity. There exists, surprisingly perhaps, quite a decent body of literature and source material, but not so much in English and in monograph form. Moreover, many if not most of the 1000+ photos here have not been seen outside of specialist circles before.

While we’re on the subject of language, if you begin your books at the beginning you’ll be reading the introduction first, in which case a cautionary word is in order: do not be put off by the typos and somewhat hobbled English—it does get better. 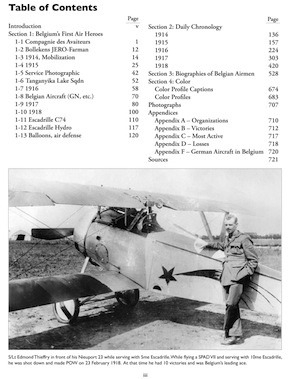 While there is a map right on the inside covers, its level of magnification is such that the reader not familiar with geography may not appreciate in just how precarious a location Belgium lay in relationship to Germany and England. This, as well as other key issues such as the aircraft building and procurement complications, is alluded to throughout but it takes some rooting around to form a cohesive picture without which the challenges for the Belgians are not readily understandable.

Pieters sets the scene by beginning with the balloonists and over the next 120 pages explains key people, events, air arm tasks, equipment etc. This includes the Belgian Congo and may well be the first time this aspect has been covered in detail in English. Not being called out on the Table of Contents it is a welcome surprise to find that this section ends with a 2-page list of abbreviations of Belgian and German aircraft, ranks, and units as well as the notations used in the remainder of the book. 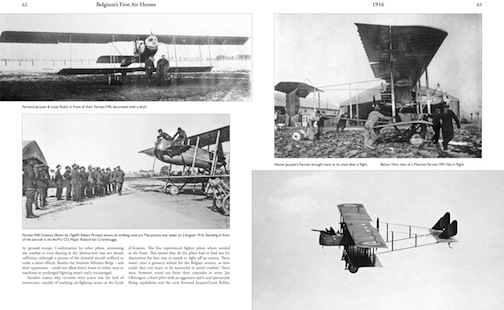 There ought to be much of interest to even the general-interest reader in this first part. For instance, as the discussion turns to mobilization for the war it is remarkable that more than half of the only 107 available pilots—among whom a woman as well as The Antwerp Devil who had once been the fastest man on earth (on a motorcycle) and even Belgium’s first flying postman—were civilians, some bringing their own airplanes! 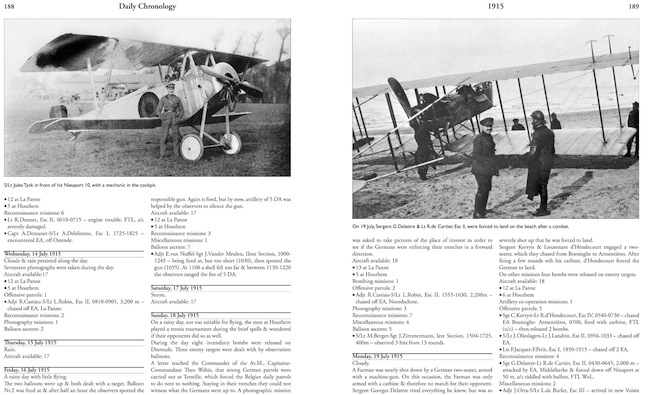 The bulk of the book, almost 400 pages, is devoted to a Daily Chronology of the air war 1914–1918 (photo above) as recorded by the CO of the Compagnie des Aviateurs that had never before been translated into English. While this includes brief comments regarding air actions it is admittedly dry reading unless you are a researcher—or a meteorologist (an absolutely crucial aspect but totally underappreciated by lay folk!). Another 150 pages offer 375 biographies followed by two dozen pages of color profiles along with a few close-ups of insignia and mascots/nose art etc. by Jim Miller (guided by color researcher Alan Toelle). The aircraft are not shown in any discernable order and also skip around in time but it is useful that the captions cross-reference book pages. 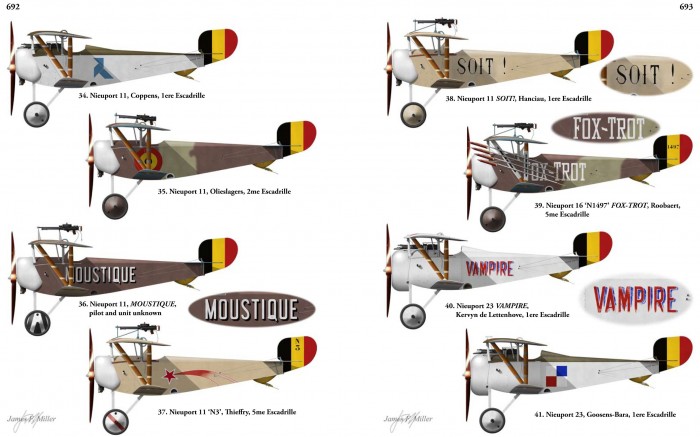 Appended are unit specifics, un/confirmed Belgian aerial victories, “most active pilots and observers” (which one presumes refers to missions flown, here ranking from 598 on the high end to 200 on the low), a list of casualties, and an accounting of German aircraft required by the armistice agreement to remain in Belgium after the war. No Index.

To the specialist, this book will be an indispensable reference and worth every one of its 9995 pennies—a pittance when measured against the decade of work that went into amassing it.