Colin Chapman: Inside the Innovator (republished) 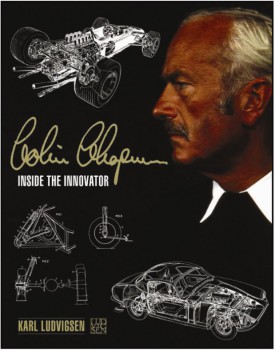 “‘His most annoying characteristic was that he was almost always right,’ testified racing-team manager Peter Warr. ‘When Chapman came in with one of his brainwaves you’d think, ‘He’s really gone off his rocker this time. I’m going to have it out with him.’ And nine times out of ten the bugger would turn out to be right. But when he did get it wrong he made some big ones.’”

Bad news: It costs more. Thanks, inflation. Thanks, Covid/supply bottlenecks.

The book was originally published in 2010 (and reprinted unchanged already the same year and again in 2012) by Haynes, defunct for years now. Their list was partially taken over by Evro Publishing, thanks to a common denominator in the form of one Mark Hughes, ex-Haynes Editorial Director and now in that role at Evro.

Just for the sake of being precise and not steer book collectors of the future wrong: the endpapers of the Evro edition are different (used to be technical sketches of Chapman’s) as is the arrangement of the frontmatter but that isn’t what made the book important anyway. What is important is the 400 pages between the covers, and who wrote them. Karl Ludvigsen studied both engineering and industrial design before becoming an automotive author of the highest order; he had his first encounter with Chapman way back in 1958.

The book may have gotten more expensive—from $59.95 to $75—but it is still a bargain as measured against research effort and relevance to the field. People with an eye for such things will notice an improvement: photos that were a bit unsharp and/or dark look better now! Ah, what a decade of technology improvements will do.

Prior to the 2010 Ludvigsen book there had really only been one other noteworthy monograph, Mike Lawrence’s Colin Chapman: Wayward Genius (ISBN 978-1855209503) from 2002/reprinted 2012. It would have remained the default purchasing choice while Ludvigsen was out of print.

Nowhere else will you find this many first-person accounts nor, obviously, the wide arc of analysis that only an author with Ludvigsen’s auto industry background and research/writing chops has on tap. In fact, the whole reason so many of Chapman’s associates were willing to tell their stories to him was because it was he who asked!

Ludvigsen has taken on the challenge of separating genius from junk, truth from fiction. One reason the person/ality of Colin Chapman is remembered differently by different people is that Chapman was, to put it politely, a chameleon. At the risk of dropping names, Ludvigsen has drawn on interviews with the likes of Mario Andretti and Emerson Fittipaldi (who contributed the Foreword) as well as older interviews with Chapman himself, often the original source of fiction! On the engineering side, the author draws on a detailed interview with Mike Costin (half of Cosworth). Other notables include Keith Duckworth (the other half of Cosworth), Peter Wright (ground effects and active suspension pioneer) and many, many others.

There are dozens of books about Anthony Colin Bruce Chapman (that’s where the ACBC in the car badge comes from) and his Lotus cars—testimonial to the man’s singular accomplishments. Most tell the story chronologically, or study the details of the famous numbered car designs, but this book takes a different tack. Ludvigsen tried the chronological approach himself but found it wanting because Chapman was not a linear thinker and doer. Often enough, ideas that were shelved because time, money, or circumstance conspired against their implementation were revisited later, sometimes in different forms or different applications. Presenting them to the reader in chronological form would be confusing, and, worse, weaken a proper appreciation of Chapman’s genius. Ludvigsen instead organizes his tribute to Chapman by topic—each of the chapters focuses on one of the major parts of a modern racecar. Preliminary or conceptual design (arguably the master’s strongest suit) is the logical place to start. This first chapter begins with a humorous look at some problems associated with the re-use of production car components and then dives into the serious business of starting a design from first principles. While the Lotus road cars are also mentioned, the real focus is on the racecars.

Subsequent chapters cover engine & transmission, suspension (including active suspension), chassis/structure (many sketches and drawings) and weight reduction, with each topic given plenty of attention. Two chapters are devoted to aerodynamic drag and aerodynamic downforce, which still dominate the design of racecars today. Chapman and his hard-working (and long-suffering) team innovated in all these areas. Ludvigsen covers each topic in great detail with a combination of thorough research and entertaining quotes taken from personal interviews and other sources.

Anyone at all familiar with the Chapman legend knows that he had his own way of working with (or colliding with!) the people around him. “Chunky” Chapman’s volatile personality was as much admired as it was resented. A full chapter is devoted to his interaction with his friends, employees, and racing and business associates. Another chapter goes into depth on his relationships with race drivers, starting with Chapman’s own driving career and featuring the well-known connection with Jim Clark, as well as over a dozen other world champions and other top class drivers.

The choice of photos and drawings is excellent, including numerous portraits that capture Chapman’s many facial expressions. Other personalities, cars, and car details are illustrated in sync with the text. These are complemented by a no-nonsense layout and book design—no need to squint into the center crack in this high quality, hardbound book.

A Lotus Timeline has been compiled that starts with Chapman’s birth in 1928, skips through his childhood and then contains yearly updates from 1947 to 1982. This is conveniently located near the front of the book so the reader can easily refer to it and keep things straight within each chapter and topic. An extensive Bibliography and Index complete the book.

If the above isn’t clear enough: Highly recommended!

As a principal of Milliken Research Associates Doug grapples with some of the same problems Chapman did. Doug’s father, the indomitable Bill Milliken (1911–2012) had technical and business dealings with Chapman—and is quoted on the jacket of the book.