Its History, Its Pilots, Its Colors & Markings 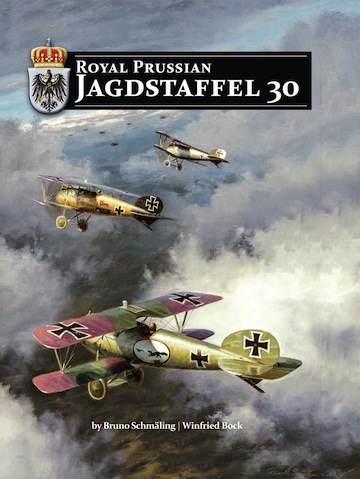 “There is a special fascination involved in writing a history based on objective facts and in part on documents available in only fragmentary form. However, this history becomes much more lively when one has a chance to speak with the participants in those past events and to incorporate their personal memories into such a history.”

This book is a new entry into the field of unit histories—and it raises the bar on every score, be it presentation or price point.

From having no specialist fighter-only aviation units before 1916 the German military would have 80 by March 1918, such was the value of this new tool in the strategists’ tool kit. The subject of this book was neither the first “hunting group” nor one of the most renowned, but it is one the very few for which more or less complete records have survived. Moreover, some of its pilots were still alive when author Schmäling, a Bavarian businessman and historian with an interest in WW I aviation dating back to his teenage days, was given in 1975 a roster of the “Old Eagles,” an association of prewar and wartime flyers. Over time Schmäling assembled an archive of photos, personal documents, and interviews. This is combined with the material gathered by the late German aviation historian Dr. Gustav Bock into what may still be the most complete collection of German World War I documents. (Realize that Bock senior’s source material has informed many a contemporary publication even if he is, shamefully, not credited.) This archive is now tended to by his son and co-author of this book Winfried, and it is that direct access to primary sources that allows this book to tread new ground—and to correct or clarify certain matters that had found their way into the literature.

Among the latter are two especially noteworthy examples. One is of interest to historians familiar with the 1933 novel by Jasta 30 pilot Otto Fuchs, Wir Flieger – Aus den Kriegserinnerungen eines Unbekannten (We Fliers – From the Wartime Recollections of an Unknown Person) in which he intentionally obscured identities and particulars. Fuchs—to whom this present book is dedicated—in his own words here explains how his publisher’s unwelcome intervention corrupted his manuscript so much that he ended up distancing himself from his own book.

The other matter is less abstract and has do to with paint schemes. Vintage photos are, obviously, black and white which means there is room for ambiguity when colors for camouflage and markings are extrapolated from them. (Also, the old orthochrome film had difficulties with “reading” certain colors anyway.) Even though officially prescribed paints can be identified by paint codes and from surviving bits, German aircraft of this early period left the factory in whatever standard finishes the various manufacturers applied and where then customized on the front. This treatment only sometimes involved theater-specific camouflage but more often than not allowed the pilots to get wildly creative, applying personal coats of arms or marks of affiliation and any color or pattern that took their fancy. Pilots and spotters often remarked how useful it was to quickly be able to tell friend from foe in engagements with the drably painted British machines. In fact, if it is paint schemes that draw you to kit modeling, WW I aircraft surely offer the most outrageous combinations. It is only thanks to the interviews of people who were there that the authors can now authoritatively pin down that precise shade of burgundy or shape and size of a numeral. Speaking of color, the book includes 56 color profiles (two top views, plus several drawings of regimental colors, lettering detail etc.) by Jim Miller and three specially commissioned paintings, two by Russell Smith and one by Jerry Boucher.

Presenting itself as “the human story of some of the first of those young warriors on the German side,” the book combines personal accounts by Jasta 30 members with Big Picture historical data points. Many if not most of the photos are new to the record and include candids and personal papers such as logs and diaries. Do remember though that the handwriting will only be decipherable by those who can read Fraktur! That the two authors are German is really rather relevant to the thoroughness of the book. All proper names and technical jargon (unit designations, ranks etc.) are properly spelled, applied and, where applicable, abbreviated. The English translation leaves nothing to be desired.

Appended are personnel and aircraft lists, end notes, an excerpt from the unit’s official war diary, and a transcription of pilot Holthusen’s logbook accompanied by photos of the actual log. A fine Bibliography and Index round out the book.

If you follow this genre you will naturally be aware of the Osprey books, now numbering in the hundreds of titles. They are competent guides and of fundamentally similar format (photos, color profiles, paintings etc.) but at a different level of magnification. They are also smaller, shorter, softcover and thus cheaper. On the other end of the spectrum are the full-size MMP hardcovers (some of their titles are published as softcovers of which some at the smaller Osprey size). There is no simple answer here which type of book fits which purpose best but the Aeronaut books are clearly, objectively distinguished by the quality of the source material, the attention to research and presentation, and the sheer quality of the printed book.

This Jasta 30 book is the first of a series; the next ones will cover Jasta 23 (which is expected to include an addendum to the first book because additional material came to light since publication) and then Jasta 3.