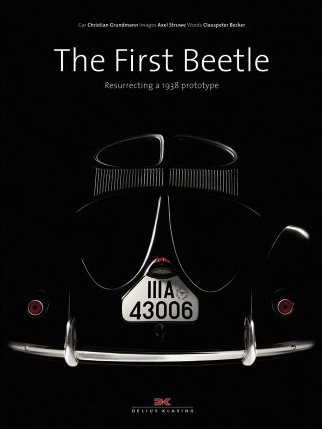 Around 2009 a US Internet forum for VWs circulated photos of a shabby Beetle that had been found in 2005 sitting in a field in Lithuania. The car had meanwhile been purchased by the person who had spotted it because it had enough “tells” in its hodgepodge assembly of parts from various models to raise the question: could this be more than just another anonymous copy of the over 21 million cars built? Could this be an early Beetle? Could this be the Holy Grail—a Beetle prototype?

It was, and this book is the chronicle of its refurbishment in the hands of a father/son restorer team in Germany and their specialist helpers who, over the course of years, have built up the most important collection of early VWs. 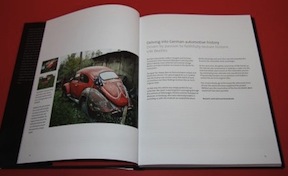 Now, anyone who followed the story when it first broke will expect of this book a definitive account of what happened when and who said what to whom and how exactly, precisely, unambiguously did the car end up in the hands of the person who had spotted it, and who actually ID’d it with certainty? By the time the current owners approached the seller (or was it he who approached them?) the derelict pile of metal already had an extreme asking price. This book does not answer those questions conclusively.

It does, on the other hand, raise many questions, at least in the mind of the astute reader. The author, a professional and award-winning motoring journalist who has plied his trade for decades, either didn’t see them, or it wasn’t part of his remit to see them, or it just wasn’t what this particular book was going to be about. Those questions have to do with a restorer’s fundamental dilemmas: at what point is a survivor so far gone that when restored it is strictly speaking no longer authentic; and should one restore to “better than new” condition? These issues certainly brought the Internet peanut gallery to a boil, so much so that it seriously frustrated the restorer of this car into saying he would never again share in-progress, look-behind-the-curtain news with the world at large.

So, we must be thankful that the book shows and tells as much as it does. Yes, the more than 70-year-old car, having lost pretty much all its original bits to either time, neglect, or cannibalization has had to be cobbled together from many, many period donor pieces that have been restored or modified or served as templates for newly made pieces. And yes, thanks to advances in, for instance, paint technology the car looks far, far, far better than it would have in 1938. 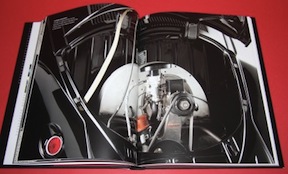 One other bit of useful information the book doesn’t disclose is that photographer Struwe is a food photographer and qualified photo designer which is surely the reason for the many unusual angles and innovative staging of the sets. Even the lighting is atmospheric, intimate—although this may just as well be a function of post-shoot computer wizardry or the printing process. (Again, a guiding word from the author would be oh so welcome . . .)

Much as the restorers, Traugott and Christian Grundmann, may have come to loathe the second-guessing of their methods by the Internet denizens, it is a fact that without the global reach of the ‘net parts, photos, and information in general would have been hard to come by. After dispensing the briefest of detail pertaining to their purchase of what was left of chassis 3806, the book presents one major assembly or task at a time—bodywork, paint, upholstery etc.—and describes and illustrates the work that was done. More than half the book is devoted to related but peripheral topics: the crew that did the restoration, posts from Internet 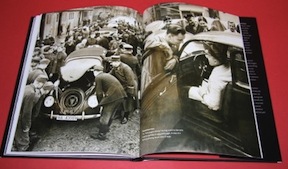 message boards, period marketing pieces for the original KdF Wagen (chassis 3806, one of three 1938 prototypes, had in fact been assigned to the leader of the KdF movement, Robert Ley) and a basic history of its production launch before closing with a serious of portraits of the shiny—the very, very shiny—restored 3806 strutting its stuff once more.

There is one other item that really is unsatisfactory and that is the author’s breathless gushing about dedicated enthusiasts slaving away over their exacting work that takes staggering amounts of time. No one in the restoration business would expect, or assume, any less. (Although why it should have taken someone 96 hours to fabricate from scratch a steel vent panel with 46 cutouts is a question worth asking.) Also, a full-page photo of an original interior is juxtaposed with an almost identical view of a new one, extolling the accuracy of the restoration; if you can’t spot three differences you better not apply to be a concours judge! (The point here isn’t that there are differences, which may well be entirely explainable, but that the author didn’t try too hard to really drill down.)

A pretty book but not really the kind of writing that impresses; a missed opportunity in other words, because what are the odds that there will be a second, better book about this historically significant car?

American Automobiles of the Brass Era »
« I Love to Make the DIRT FLY!