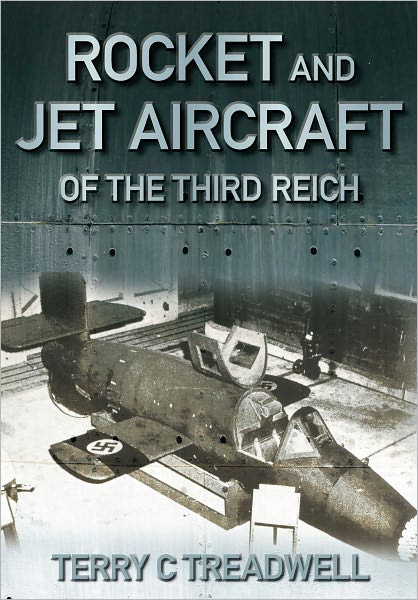 Using 11 machines as examples, well-known aviation author Treadwell highlights German efforts during World War II to explore new mechanisms for propulsion and discuss them in the context of all the other required innovations in regards to everything from tire rubber to airframes to fuel, not to mention piloting skills. All told, Germany produced on the order of 200 designs using either jet propulsion, rockets, or a mixture of piston and jet engines. Not many went beyond the design stage and fewer still became operational. If this sounds like a large topic, it is, and a very great deal has been published in this field especially in recent years.

By advertising this book as “providing unrivalled insight into the aircraft that made Germany an almost indomitable enemy,” the publisher paints itself into a corner. If we divide the possible audience for a book such as this into experts and novices, the former will only have to take a quick look at it to know that this claim is unsupportable, and the latter will internalize bits that are just “off” enough to raise flags or, in the case of several minor matters such as spellings (or nomenclature, specs), outright wrong.

On the one hand it sounds pedantic to use this particular example, on the other hand it is probably indicative of bigger issues: ask yourself how serious can a book about German rocket science be that can’t even get Wernher von Braun’s name spelled right one single time? (There are countless cases of problems with foreign words and names.)

Or why call a particular propellant C-Stoff (substance C) in a photo caption but Z-Stoff in the text? Only the former is listed in the Index and what complicates matters is that both, and a dozen more, actually exist in the aerospace world. And using the term Scheuschlepper (translated here as “shy tug” [scheu being the German word for shy]—what the heck could that possibly mean??) is a case of the blind leading the blind. The Scheuch-Schlepper (tractor) is a contraption derived from an agricultural machine named after its maker, Scheuch. The list could go on and on.

It is either arrogance to think an author or editor don’t have to look stuff up, or ignorance to not realize that they’d better! Or laziness. Or cost cutting. No matter what it is, it’s not the reader’s job to make excuses for the writer and publisher!

Glitches don’t inspire confidence, and confidence is what you’d need when you get to such minutia as, say, the launch trolley of the Arado Ar234. Not all versions had them but this book lacks specificity, in this and many other cases. So we return to the opening statement: this is a small book, and it cannot be both brief and detailed at the same time.

Nothing is explained about the origins of this book so it is difficult to know what to make of it. The author is a seasoned writer on aviation topics ranging from WWI to space exploration, an ex-RAF communications man and, most relevant, a former research and project officer for the RAF Museum. He was even the European Editor for the U.S. Navy’s official magazine, Naval Aviation News. These are not gigs just anyone gets—so why is this book so lacking in finesse? Unkind souls will suspect that it is merely trying to ride the current wave of interest in this subject, or a publisher foisting a pet project on an otherwise capable author who seems to merely have raided the existing literature to cobble this one together. Not even the reproduction of well-known photos is all that impressive here, and certainly the captions leave out much detail.

Serious readers will always check out the apparatus first—source or chapter notes, bibliography, acknowledgements etc. There aren’t any. . . . If you are familiar with the vast body of literature you’ll probably have your own ideas of the sources Treadwell used but then that begs an inevitable question: does this new book have anything to really commend itself except low price?

Most of these can be considered the usual suspects and their inclusion here makes sense. Seeing something like the Henschel Hs 132 is actually a bit of a surprise in a book of this limited scope. While certainly not “new,” the author does make a point of drawing attention to the lengths to which the German SS troops would go (read: sabotage) to prevent this technology from falling into Allied hands.

If one had unlimited funds to buy books, and space to shelve and time to read them then this book would be just fine. But for anyone who has to be selective, this book is not a clear choice.