American Cars, Trucks and Motorcycles of World War I 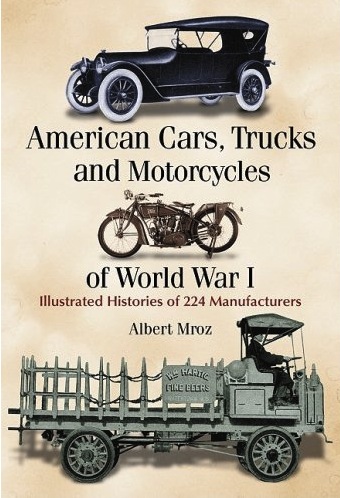 Written a year after his book on the American Military Vehicles of World War I Mroz presents here an illustrated history of 225 of the American companies that manufactured cars, trucks, or motorcycles for the civilian market in 1917 and 1918. While the actual number of manufacturers is probably larger, Mroz omitted the ones that had only marginal impact on the consumer market either because their output was too small or never even reached series production. Unlike the earlier book, this topic lends itself to straightforward alphabetical organization. This new book complements the earlier one better than the other way around inasmuch as an integral aspect of the first book was the fact that with few exceptions the vast majority of vehicles that were appropriated for war use were out of necessity initially stock or only slightly modified civilian vehicles. Thus, this book gives background on various items only mentioned in passing in the earlier one. Where there is overlap with military vehicles (be it support or combat) it so noted.

The book’s aim is to give a basic perspective on this specific time period, not to serve as an in-depth model history or to present any one maker’s entire model range. Even with this intended brevity the text consists of fully articulated sentences as opposed to bullet points and is quite detailed.

The cardinal thing to know about its organization is that the alpha listing is byvehicle name, not manufacturer, for the obvious reason that, for instance, the truck called “Acme” will be widely known by that name rather than its manufacturer’s name, Cadillac Auto Truck Co. The vehicles are also not subdivided by type, not even in the Index. So if you don’t know that a “Hal” is a car and a “Hall” a truck, you’re out of luck. However, motorcycles have that designation added in parentheses after their name both in the book proper and in the Index.

The text of the profiles ranges from as little as one column to several pages. Each listing has an illustration, sometimes several, sourced from period catalogs. There are quite a few cases were it looks as if there is no illustration because it is on the following page, for reasons of layout. In those cases where one profile describes several models, the illustration/s will be of the model/s the author deems most representative. The photos are preceded by the manufacturer’s address which can be as general as city/state or as specific as nearest cross street. Retail prices are listed if they are available. The photos are followed by a list of specs which are also sourced from period material. Their presentation from vehicle to vehicle can only be as uniform as the source data permits.

If you already are a specialist in this subject, this book offers a convenient, one-stop reference guide distinguished by more or less uniform presentation of data that allows apples-to-apples comparisons. If you are new to this subject you will make many, many worthwhile discoveries here about an era that would usher in a long period of American dominance of the automobile sector and manufacturing processes not to mention individual and collective freedom brought about by the proliferation of mobility.

There is a list of abbreviations, a short Bibliography and a thorough Index.

American Military Vehicles of World War I »
« Route 66: The Empires of Amusement