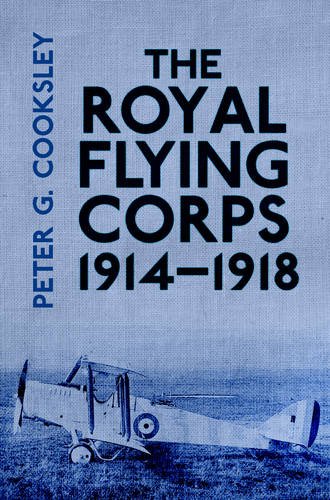 “As the few survivors of the RFC gradually vanish for ever from the scene, I have seized this final chance to present an accurate picture of the RFC, so that what you hold in your hands is a unique and unrepeatable document, in both social and military terms. It is a comprehensive overview, describing the aircraft uniforms, tactics and feats of arms, but neither human interest nor the lighter side are forgotten.”

The above words from the Introduction are dated 1999 but were not used in a book of this title until 2004, reprinted 2007 and 2014. Confusingly, a book with a similar title and its own ISBN 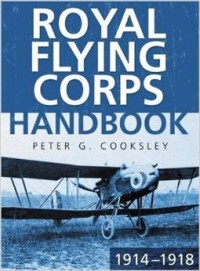 (9978-0-7509-4772-5) exists, Royal Flying Corps Handbook 1914-1918 published by Sutton and still widely available. The word “handbook” really is a useful pointer as to what this small book seeks to, and does, accomplish. In fact, the quote above pretty much says everything you need to know.

While we’re on the subject of confusion, readers who follow the work of this prolific Associate of the Royal Historical Society may recall that in 2011 news flashed across the Almighty Interweb that he had died. It was picked up by a number of chatrooms before being declared a misunderstanding. Instead, his wife whose first name also begins with P had died, a few months prior. Cooksley, the tremendously capable researcher who also served on the executive committees of Cross and Cockade International and the Croydon Airport Society, would not have been amused at this slipshod way of putting “information” into the world.

None of that is a concern here; this book is solid. It does not position itself as an in-depth blow by bow account of the six-year history (only 26 months of which in peacetime) of an air arm that would create the mold for, certainly, the RAF but really all early air forces. Instead, it is an overview that, despite its brevity, touches on more things than many bigger books. Moreover, when Cooksley says that neither human interest nor the lighter side are forgotten he is not kidding as this quote (which certainly qualifies as human interest but probably not, at least for the poor man concerned, under “lighter side”) about high-altitude flying demonstrates: “. . . perspiration could freeze . . . as could urine. . . . One pilot recalled that the cold caused his penis to ‘shrink to the size of a periwinkle.’”

Another quote is worth pondering so as to fully appreciate just how rocky a start the RFC had. Despite having served in the Afghan Wars were airpower had been brought to bear and made a difference, in the year before the formation of the RFC none other than the Chief of the Imperial General Staff pronounced, “Aviation is a useless and expensive fad advocated by a few individuals whose ideas are unworthy of attention.” By the end of the war, Lord Hugh Cecil, an Eaton and University College man who had graduated with first-class honors in Modern History in 1891 and whose father had been Prime Minister three times, had the good sense to say: “The RFC is the greatest of the novelties of the war.”

This book tells the story of that arc, beginning 50 years earlier, with the first organized attempts to explore the military potential of manned balloons, itself an idea that had first been circulated another 50 years before. From man-lifting kites to balloons to airships to heavier-than-air machines, from tossing hand-held explosive darts at the enemy below to wireless communication to Concentration Camps (not what you think!), and from the design of uniform buttons to the role of women in the services this book covers a lot of ground. It is also very well written so even if you find yourself forced against your will into reading it, you probably won’t put it down. Cooksley has written and co-written piles of learned tomes at the granular level so he absolutely has command of the subject matter.

Quite a number of the photos are previously unpublished, and there are several line drawings and maps. Cooksley even attends to such peripheral matters as who really designed the RAF badge (“an eagle volant and effronte, the head lowered and to the sinister”), and some 30 pages of Appendices delve into “The Songs They Sang” and the role of medical organizations, how RFC ranks relate to RNAS/RN ranks, the flying school, statistics and aircraft markings, and more.

A tip of the hat to the acquisitions editor who had the sense to re-issue a good book at the 100th anniversary of the RFC’s founding  rather than crank out a new and possibly less competent one!

Take Five, the Public and Private Lives of Paul Desmond »
« Making a Morgan: 17 Days of Craftmanship