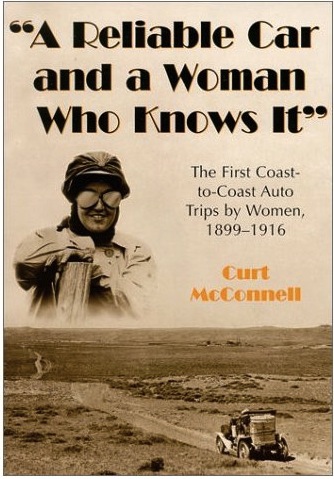 McConnell’s two related earlier books about transcontinental trips are supplemented here by the story of pioneering women drivers who tackled great distances just to show it could be done. None of the three books makes reference to the others and we continue to be puzzled by this odd bit of marketing strategy.

In 1909 Alice Huyler Ramsey, a 22-year old mother accompanied by three friends, left New York City and headed west at the wheel of a 4-cylinder Maxwell. A goodly crowd and city officials saw the ladies off and the event received ample press coverage. After 53 days the car rolled into San Francisco after an eventful trip over roads where they existed and paths or trails where they didn’t. Despite breakdowns and iffy weather, the four ladies were widely acclaimed at their arrival in San Francisco and Alice Ramsey was heralded as the first woman to drive a car coast to coast. The first such run (SF–NY) had been made six years earlier by Nelson Jackson and Sewall Crocker, but a trip by one of the distaff side was something new. Mrs. Ramsey reported on the trip in her 1961 book Veil, Duster and Tire Iron. Author McConnell has chronicled this event in considerable detail as well as four others in this intriguing book on what motoring was all about in the pioneer days.

An early attempt to span the continent, also covered here, is the one by John Davis and wife in a Duryea, who made it as far as Chicago in 1899. Mrs. Davis, however, left the driving to her husband. In 1910, a year after the Ramsey run, Blanche Stuart Scott left NYC for SF in an Overland equipped with built-in wardrobe trunk and toilet. Leaving NYC on March 16, the Rochester, NY pioneer arrived in San Francisco on June 23rd after 68 days on the road. Curiously, Mrs. Scott claimed the title as the first woman to cross the continent for herself, disavowing any knowledge of the Ramsey run.

In 1915, at the wheel of a Kissel Kar, silent film star Anita King bested Ramsey’s time by 11 days on a SF–NY run and set a new record. Concluding his coverage, McConnell describes the ins and outs of Amanda Preuss’ Oakland, CA–NYC trip in an Oldsmobile in 11 days, 5:45 hrs. No major problems except for a collision with a horse in Wyoming.

Won the 1995 Thomas McKean Memorial Cup of the Antique Automobile Club of America.

Copyright 2001, Keith Marvin (speedreaders.info).
Adapted from a review first published in Jan. 2001 in The Flying Lady, the periodical of the Rolls-Royce Owners’ Club (RROC/USA).

Posted Under: Adventure, Automobiles | Author: Other | No comments yet