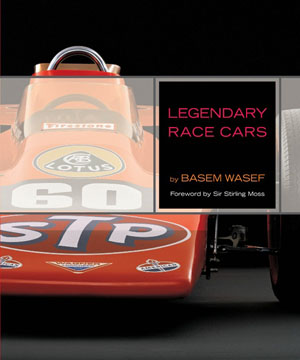 McLaren, Lotus, Maserati, Ferrari—simply saying the names of the world’s great racecar makers is thrilling to their fans. The words sound fantastic on their own; still powerful even after all the years they’ve been household words. That’s because the names bring with them remembered images and sounds of the fastest and most exotic automobiles mankind has ever made.

In the same vein as his 2007 book Legendary Motorcycles, Basem Wasef has put together a stunning photo book covering the top cars from the first century of automobile racing. Cars as varied as the 1911 Marmon Wasp that won the very first Indianapolis 500 and Colin McRae’s 555 Subaru Impreza are extensively profiled, along with the men and women who drove them.

Racecars by themselves are interesting pieces of machinery—test beds for technology and engineering, design and aerodynamics. But what makes a racecar truly breathtaking is the knowledge of its achievements. A racecar that has never been driven is little more than a 1:1 scale model of an interesting design. It’s what happens to the car when it is put to the test in the heat and chaos of racing, in the hands of a brave and skilled driver that makes it memorable.

Many books about classic racing cars focus on the machinery—horsepower, top speed, or other technical details. Those facts may be impressive, but what Wasef has done is more than that. He tells the story behind each of 25 of the greatest racecars of the 20th century, including the design and development, the active racing history, and the personal stories of the people who drove these cars to legendary status.

Wasef did a good job selecting the cars. Almost every form of international racing is represented, from World Rally to Formula One to Top Fuel drag racing. I might have included a land speed record car such as Craig Breedlove’s Spirit of America, but Wasef’s choices are all worthy.

Beyond choosing the right cars, Wasef went into the field and did his homework on each car. This is no fan book that simply recounts the standard information most enthusiasts already know. Wasef sought out the photos that are not often seen, and had each extant car professionally photographed as it appears today. Luckily, most have been restored or maintained in their original racing livery, so you get a good, detailed look at each car as it looked when it raced. Successful racecars from NASCAR, the Baja 500, Le Mans, and the Mille Miglia are all covered, with notable period photographs as well as the best that modern digital photography can deliver.

The photography in this book is the first thing you’ll fall in love with, but after you’ve paged through and consumed those goodies, you’ll come back to the writing. Wasef has a smooth and readable style, and his respect and passion for the topic shows through on every page. A careful read-through of this book will give you a solid grounding in the lore of these racing cars, not just the stats. Speaking of photos, the book jacket (front and back) shows a frontal view of a Lotus 56 and is intended for framing and therefore does not have any text printed on it anywhere but on a removable strip of heavy-weight parchment paper (called a belly band—no kidding!) whose ends are taped to the inside of the cover boards to keep it in place in case you are leaving it on. (This may take some patience, and possibly mineral spirits or the like, to remove cleanly.) The actual covers below the dust jacket have the same photo plus all the printing on them.

Among the stories in the book that may be new to modern racing fans are those that deal with the oldest racecars. The 1908 “Great Race” around the world is not often remembered these days, but Wasef located and photographed the winning entry—the “Thomas Flyer” circled the globe in 169 days, driving 22,000 miles, besting the competition by 26 days. That’s not a story you’ll hear on the SPEED channel this weekend. Wasef also covers the 1911 Indianapolis 500-winning Marmon Wasp, and several early European racecars as well.

The last thing to note is the quality of publishing. Motorbooks did a great job with high-quality paper and excellent printing. Every photo is sharp and the book has the heft and feel of a museum-quality publication. For the dedicated auto racing fan, Legendary Race Cars is a must-have.

Copyright 2010, Jeffrey Zurschmeide (speedreaders.info)
Disclosure: The reviewer and Basem Wasef are both employed by About.com, although they’ve never met in person. Jeff is a lifelong devotee of sports cars and a second-generation SCCA member. He has written for numerous magazines and newspapers on cars and the automotive enthusiast hobby and has authored three books on automotive customization, repair, and performance modification.

Posted Under: Automobiles, Photography, Racing, Rally | Author: Other | No comments yet