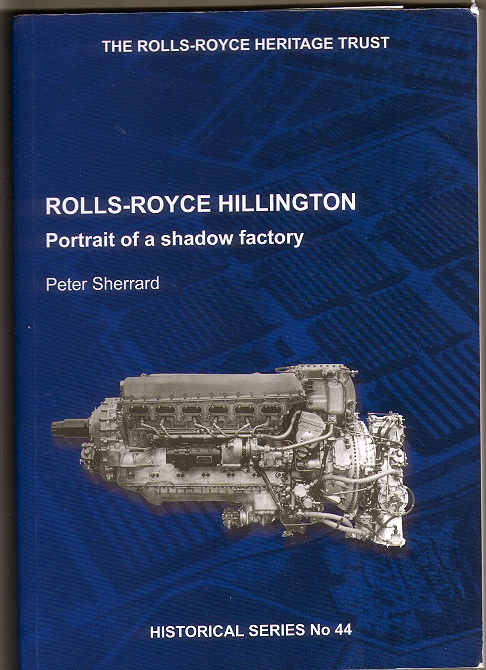 Preparing for World War II, the Shadow Factory scheme was the British Government’s attempt to guard against the possible loss of key industrial sites, in this case the Rolls-Royce factory at Derby. The Hillington plant on the outskirts of Glasgow, adjacent to the Renfrew aerodrome, was Rolls-Royce’s first site in Scotland and, in addition to the factory at Crewe, the second Shadow Factory. Erected shortly after the outbreak of war, Hillington produced Merlin aero engines for Spitfires, Hurricanes, and other aircraft in huge quantities.

Postwar work of repairing and overhauling Merlin and Gryphon engines was in time supplanted by the production of gas turbine engines. By the time of its closing, or rather relocation, in 2005 the plant had produced compressor blades, vanes, seals, and shrouds for virtually every engine produced at Rolls-Royce.

Not only was Hillington critical for Rolls-Royce—exceeding its forecasted lifespan of 25 years by several decades—and the overall war effort but it also made an important contribution to Scotland’s social and industrial history. To this day, the Scottish sites (Renfrewshire, Lanarkshire, and Fife) play a major role in the company’s aerospace and marine businesses.

Author Sherrard is Chairman of the Rolls-Royce Heritage Trust’s Scottish Branch whose home is at the Rolls-Royce East Kilbride factory (the largest jet engine repair and overhaul facility in Europe). As all the Trust’s branches, it is charged with the preservation and documentation of the engineering heritage of Rolls-Royce and its ancestral companies and product ranges. Thus, much of the material gathered in this book is culled from earlier writings by and for the Scottish Branch. The story, 1939–2005, is told more or less chronologically; much reference is made to primary sources which are quoted from or excerpted at length.

Readers already familiar with Rolls-Royce history will of course be aware of the staggeringly important role Ernest, later Lord Hives played as General Manager in the affairs of the company, and it will only serve to enhance their appreciation of him to come to see here the man’s enormous grasp of matters large and small, be they engineering minutia or politics, and also his strength of character in regards to his dealings with his fellow man.

It must be borne in mind that a key target group for the RRHT’s publications are the Rolls-Royce employees who either made this very history happen or, now, stand on the shoulders of their forebears. What to the outsider may seem an excessive naming of names or dwelling on internal micro detail is for these readers the very essence of what motivates them to work at Rolls-Royce. The firm’s well-deserved reputation, then and now, for engineering excellence is directly related to each individual employee’s commitment to the cause, and books like this serve to remind the reader of just that.

This is the first RRHT publication to be accompanied by a DVD. This being a British product, the 23-minute DVD documentary is formatted for the PAL system but elsewhere can be played on any computer or region-free DVD player. Narrated by “voice artist” Alan Turton (currently the voice of Pitch TV and Pitch World on Sky TV) who has been a Communications Consultant with Rolls-Royce Aero Engines sine 1985, it contains fabulous archival footage and you will meet a number of the actual people who worked here over the decades. Useful insight is given into modern-era workflow and working conditions, and also the particulars of going into Receivership in the 1970s. If nothing else it’ll give you a chance to practice your Scottish accent!

This is vol. 44 in the RRHT’s Historical Series.

Car Guys vs. Bean Counters: The Battle for the Soul of American Business »
« Rallying to Monte Carlo