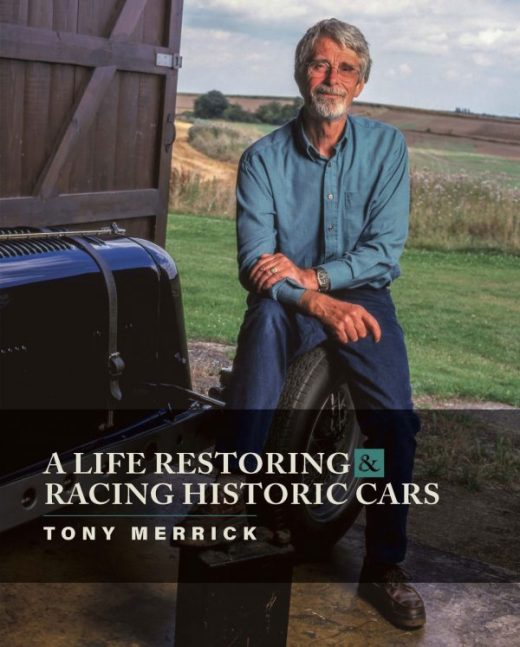 “At this time (1957), I was supposed to be studying Automobile Engineering, but what with helping fellow students with their various vehicular problems, working on the Vauxhall and keeping the Singer alive, there wasn’t too much time spent studying, so, although I passed all my exams at the end of the first year, it was suggested that I should leave and pursue a different path.”

Would you buy a used Rolls-Royce merely to extract its bulb horn? To stick into a lowly Vauxhall? Merrick did, which, if nothing else, illustrates that he won’t let himself be distracted from the project at hand. That Vauxhall was then a dilapidated breakdown truck, one of his early restoration projects, in the 1950s, and he did the job so thoroughly that the car survives to this day, in a Vauxhall museum no less.

This little vignette should suffice, if you’ve never heard of Merrick, to establish that he is serious about his work. And if you have heard of him, which is well nigh a given if you spend any time on the Historic Grand Prix Car scene, you will nod sagely upon reading a throwaway comment of his in the Acknowledgments: “Most of my customers remained friends, and I apologise for the grief I have caused them though my, often large, invoices.” 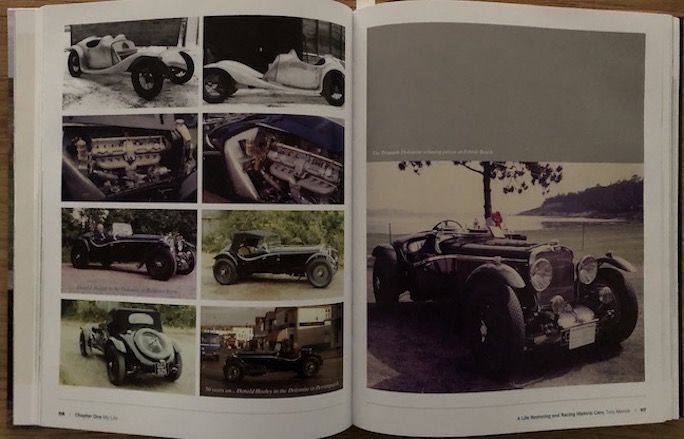 A few months after this book was published, news broke that Tony Merrick had died (Dec. 2021)—a reminder that time waits for no man, which makes this book all the more precious because writing it and seeing it published gave him some joy at the end. By the time he wrote it he had already been retired for over 20 years. When he started he had been the proverbial right man in the right place to get into the restoration field where he steadily made a name for himself. The world is a better place for him having written his own book, and one shudders to think how hard it would have been for someone else at a future time to establish the particulars of the many cars that received his ministrations and the many car owners and colleagues whose paths he crossed. For anyone in that scene there’s nary a page in this book that doesn’t contain a car or person you don’t recognize, for anyone else it is a testament to an utterly unique era that will never be again: as his contemporary and customer Alain de Cadenet—who surely needs to be nudged to write his own book! [1]—says in his Foreword, “Virtually all the cars that Tony performed his magic upon were readily available to all and sundry not so many years ago.” Today, and, really, over the last 20 years, many of the cars you’ll see in this book have rung up 7- and 8-figure prices. 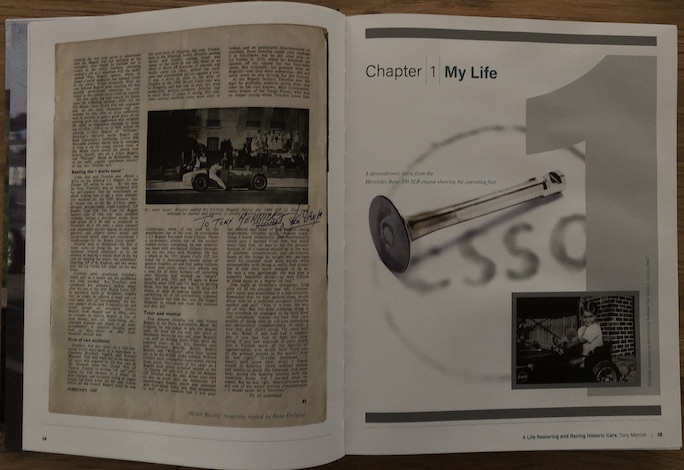 The book, wonders of wonders, has an index, two in fact, one of personalities and one of cars by make and model (this section also states the owner, and those names, many occurring multiple times, tell you right there who some of the movers and shakers are).

The casual reader could read the book simply cover to cover, front to back, chapter by chapter (My Life, the longest at about 200 pages; The Cars, at 146; My Racing, about 20) and be entertained and enlightened but it is reasonable to assume that the person who has the good sense to be interested in this book in the first place is anything but casual. That sort of reader will look for dates, chassis numbers, technical details, rebuild specs, and ownership chains. There is a great deal of that here but, obviously, specific/exclusive to Merrick’s activities (though often including references to other, usually prior work) so don’t expect any soup to nuts histories of specific chassis. Not all the cars presented here are race cars which have especially complicated restoration histories. 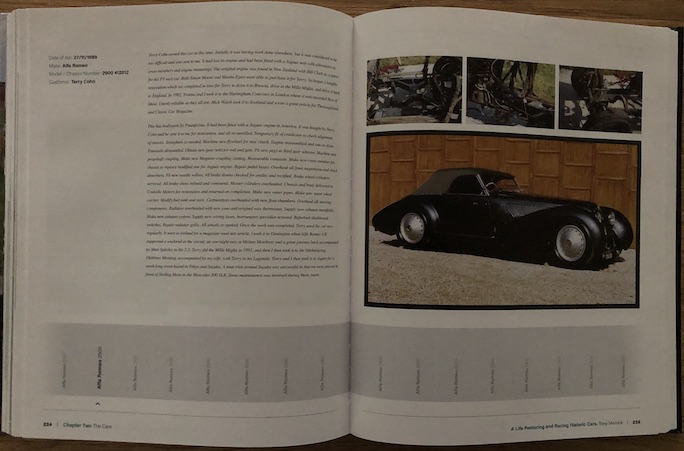 An example of a fairly long photo caption. The model “timeline” at the bottom serves no practical purpose.

The “Cars” chapter deserves a few more words regarding methodology: it is organized by marque and within that by model and then chassis number. In some cases, there may be multiple entries for the same chassis, for instance when a new owner commissioned subsequent work. The entries have a uniform data block listing date of work, make/model and customer, and notes of varying levels of detail. 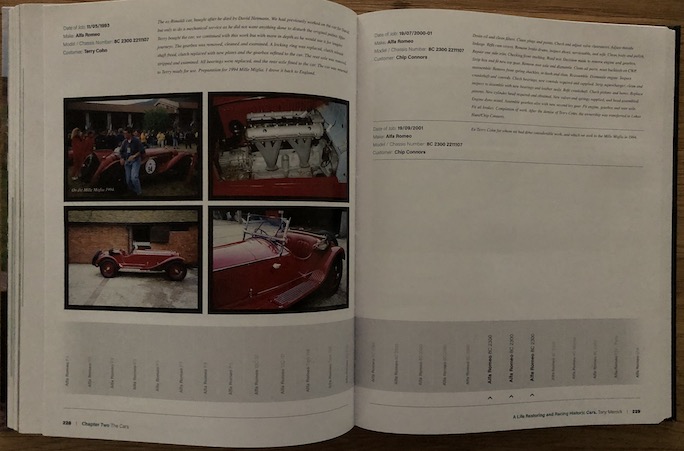 Here an example of multiple entries, all for the same chassis. Visually there are all treated the same so you have to watch for the chassis number. 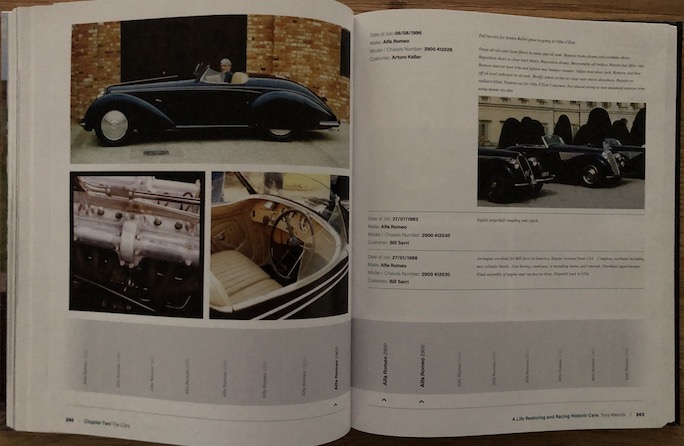 Here, only two of these entries are for the same chassis so you always have to keep an eye on those chassis numbers. Also, the photos are not dated so it is not always clear which entry, which sometimes are years apart, a photo goes with. 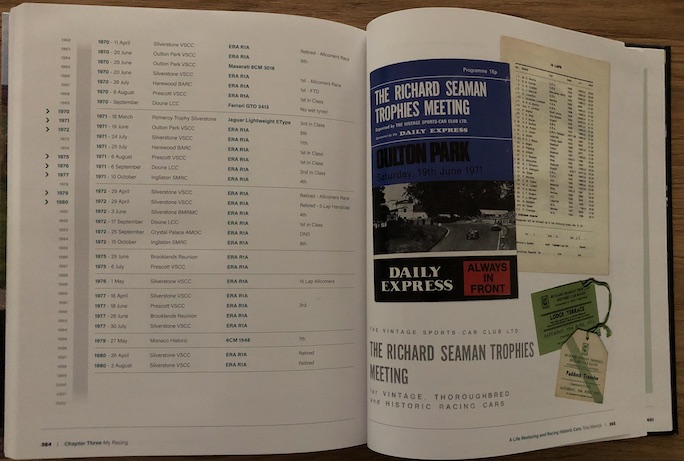 A page from Merrick’s racing activities. Here, the timeline, on the outside margin, does serve a purpose.

The writing style is a bit underwhelming, and the only reason this stands out is because the book had a professional editor, motor racing historian Adam Ferrington, whose craft is in full display in the superlative Francis Howe bio he co-authored; one is left to speculate that polishing prose was not his brief this time. No matter, there is no other book that tells this story, so enjoy it for what it is. Also, the book is self-published and one can only marvel how Merrick has managed to produce such an opulent piece of work at such a—relatively—low price.