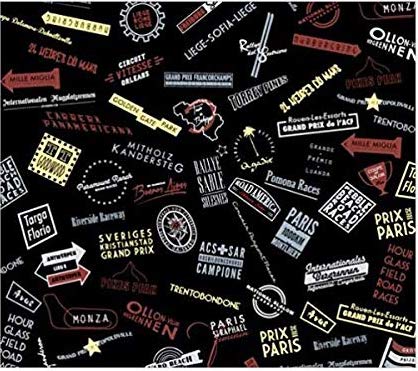 “I’m absolutely no Porsche expert, and probably will never be but I got intrigued by the early 550s that raced in the 1953 and ’54 Carrera Panamericana Mexico and the 1954 Le Mans 24 hours endurance race. I think these are the nicest of them all with the larger rear wings and vertical head lights. Being not an expert I preferred not to get involved with chassis numbers, a very important ‘detail’ these days, but while preparing this book it became clear that—to my opinion—mistakes were made in other publications.”

Despite the German title (Sporting Success) this book is in English, but the car it’s about is very much German and it certainly had sporting success aplenty.

From his first book, Alleggerita, in 1994 to his latest, author Tony Adriaensens has shown a quite uncommon pursuit of a vision, his vision. It helps to be able to produce one’s own books, and not to have to chase a price point or sales target. And it helps to have built an audience that appreciates just such effort: all of his books are sold out—except this one. Why that is, is unknowable. It’s neither the most expensive, nor the cheapest, nor the newest. Could it be that it simply is being overlooked among the quite absurdly oversaturated Porsche literature?

People you should know, stories you should know, places you should know, cars you should know.
Top to bottom: Karl Kling—in suit and tie—checking out his “office;” Jacqueline Evans was as unlucky in racing as in marriage; she was divorced four times and ran in five Carreras but finished none; the banking of the Avus in Berlin never looks as steep in photos as it does standing at the edge of the infield and seeing the cars at an entirely improbable angle above you. Seen here two Alfas 1900SS, Zagatos no less, being chased by a Porsche 356 Carrera.

While Porsche cars are the main topic here, the book really should appeal to anyone with 1960s road racing/rallying interests, and definitely to anyone who may have attended the events shown here (mostly European/Continental, some US, some elsewhere)—or wish they had!—and most especially to anyone to whom photos are more than decoration.

First things first. The book is 10 x 9″. Make that, only 10 x 9″. You reach for it with one hand—and you’ll think you’re on “Candid Camera.” Because you won’t be able to pick it up. Because it weighs over 6 pounds! There’s one more physical attribute to be warned about: you’ll need to lube those eyeballs because the text is microscopically small, maybe 6 points, and the photo captions are not printed at 100% black making them even less legible. Adriaensens has a background in graphic design so he must have known what he’s doing! A couple of hours of this and even young eyes will want a break. 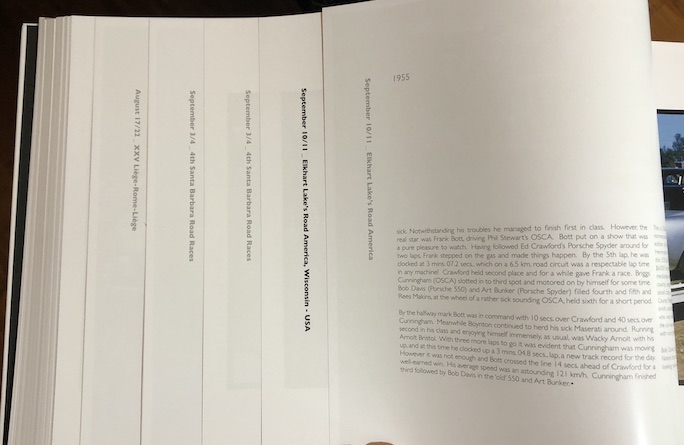 This is an example of consecutive pages. Month/day and location are printed sideways near the front edge (but not the year). When they’re in bold it means the multi-page coverage starts there. Not that this is explained anywhere…

Good thing it’s the photos that will monopolize your time. There are hundreds, many/most not published before, and there is so, so much to discover. Adriaensens thinks of this book as a photo essay but that doesn’t really do justice to the forensic detail he offers. There exist piles of photo-centric books on this subject but one would be hard-pressed to find another with this consistent level of nano detail. He has something enlightening to say about pretty much everything in a photo, not just the Porsches. Whether that information is drawn from memory or from published or other sources, that one person should have this much data on tap is rather staggering. 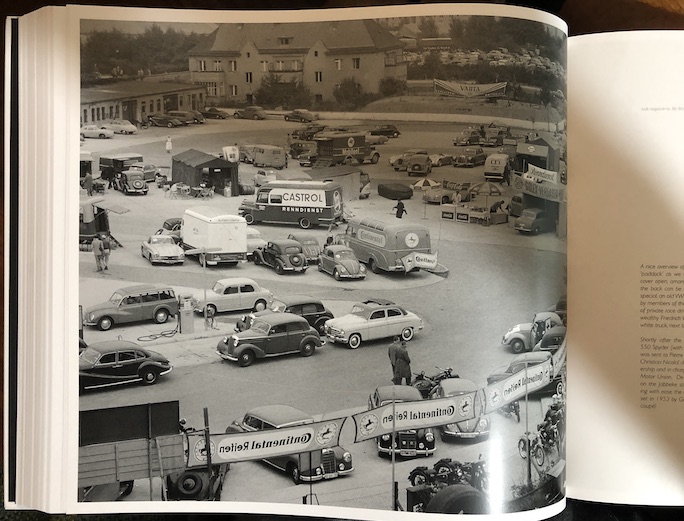 A perfect example of a photo that could keep you busy for a while. The paddock cum parking lot at the 1955 Grand Prix of Germany at the Avus. That Gullwing Mercedes on the left is interesting; more interesting is the white truck to its right. That’s one of Louis Chiron’s who ran OSCAs here. And what bigwig is tooling around in an “Adenauer” Mercedes limousine?? And did you see that VW Beetle medical car? The caption directs attention to “Wolfgang Seidels’ Spyder, engine cover open.” Have fun finding it! (Clue: it’s the #18 car.) The thing is, unless the original photographer had made a note of this (and this was a transparency anyway) Adriaensens figured this out on his own—how much time must he have spent analyzing such images?

The book is really not meant to be a soup-to-nuts history of the events covered (which are selective anyway, and some really quite obscure) nor, for that matter, road racing in general or Porsche cars in particular. To be sure, the events are presented in chronological order 1951–63 and each is summarized in a comprehensive form, but it is the photos, and specifically the story-telling properties of the images Adriaensens selected, that make the book special. Oddly, he does not say much about the photo sources so a reader may well remain unaware that Adriaensens started decades ago to buy up entire collections. It is actually remarkable that all the mostly non-professional photos here are “good” in terms of photographic technique and composition. Their reproduction in print is also commendably excellent.

Look at all the civilians wandering around the pits! This is Rouen 1957. Only 8 cars started, making this photo a good example of how this book looks at the big and the small in equal measure.

If a 1300S with snow chains leaves you cold how about that futuristic building on the left? (It’s 1956.)

A Speedster Carrera is a rare enough animal, but one with a streamlined tonneau? This is Santa Maria, CA in 1960 so the license plate is noteworthy: US Forces in Germany. 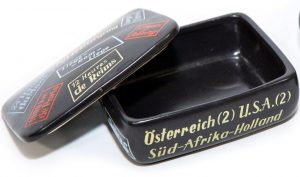 Incidentally, how well Adriaensens understands his subject is even reflected in the slipcase for this book, which is open on two sides. Those logos aren’t just race venues; the design—color, typography etc.—are inspired by the ceramic cigarette boxes (and ashtrays and the like) by Ulmer Keramik that Porsche used to give away in the 1960s. They rarely come up for auction and when they do, they’ll cost way more than this book!