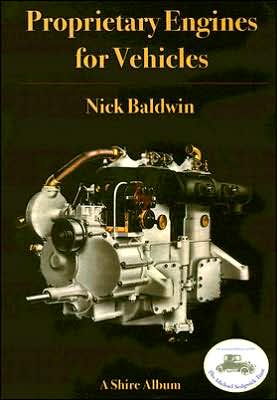 A tiny booklet about a big subject! Thirty-two pages can contain only so much information and, as always, Shire makes every word count. This is their Album #360 so they obviously are practiced at this. One can only marvel at the intense level of detail crammed into these tiny books. This is the second Shire title published in conjunction with the Michael Sedgwick Memorial Trust, named after the long-time curator of the Montagu (later National) Motor Museum in England who died in 1983. Its purpose is to sponsor original research and make possible the publication of motoring history that might otherwise not be commercially viable. This title is in fact a continuation of research begun by Sedgwick himself and one can only hope that the years of research invested by Baldwin will amortize themselves in something more exhaustive than this booklet.

Proprietary engines have been used by the millions yet the subject is not well represented in the literature. For instance Morgan has continuously, from 1910 to this very day, used other people’s motive power. (And did you know that the highest-placed British entry at the 1933 Rallye Monte Carlo was a Bentley powered by a Gardner 4LW?) Many—and famous—were the auto companies who never made their own engines but instead bought them from outside specialists. This book examines the reasons for that (economical as well as technological) and presents an overview of the various engine types and their manufacturers. The engine historian will want more, more, more. In addition to the photos there are detail drawings, period ads, and a bibliography.

Posted Under: Automobiles, Technology | Author: Charly Baumann | No comments yet

Mercedes-Benz Supercars: From 1901 to Today »
« Danish Painting, From the Golden Age to the Modern Breakthrough