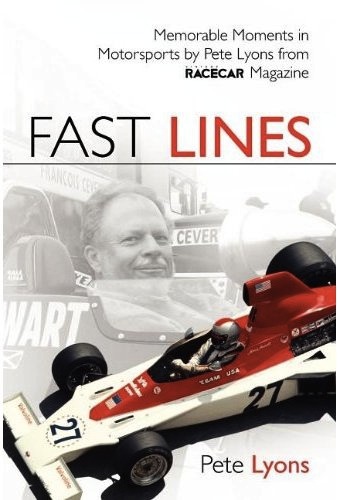 A Brit, I became a devotee of Autosport in the late 1970s, and therefore missed out on Pete Lyons’ writing for that magazine. Nor have I read nearly enough of his work in US publications such as AutoWeek, Road & Track and Corvette Quarterly, or his numerous books, several of which are devoted to his favorite form of motor sport, Can-Am. So I was delighted when Lyons gathered together 55 of his best-liked “Fast Lines” articles, originally published in Vintage Racecar magazine, and for Octane Press to publish them in this wonderful little paperback. I bought it in person from Lyons in Vendor Alley at the 2011 Monterey Historics and it’s been a regular companion ever since. Permit me to explain why.

The articles are divided into five sections—Heroes; Cars; Events; This and That; and Rants—and are preceded by a brief foreword from the editor and publisher of Vintage Racecar, Casey Annis. In this, Annis explains that he considers that only a handful of writers have lifted motorsport journalism to the point of literature. He names the famed former continental correspondent of Motor Sport, Denis Jenkinson, as one, and puts Lyons in the same category. Praise indeed, but the 60,000 words that follow more than justify it.

Indeed, it comes as little surprise that Lyons accords Jenks an article all of his own in the Heroes section: “The man wrote magic . . . It’s a sure thing that, if I ever had a guru in this business, Jenks was it” and he quotes extensively from the Englishman’s The Racing Driver (Batsford, 1959) in another Heroes essay, on the great Fangio.

In his introduction, he distinguishes between composing race reports, “where deadline pressure forces you into a tight, noisy, frenetically fast little world,” and “column-crafting” which “is like going back to the track when all has fallen quiet.” Barely has the reader opened the book, and the quality of Lyons’ writing is already shining through. It reminds me of James Bond’s creator, Ian Fleming. Whether in his Naval Intelligence Division reports, the 007 novels, his children’s adventure Chitty Chitty Bang Bang or his travel writing, Fleming was a master not only at stringing phrases together that sounded good, but at describing actual sounds.

Here, Lyons refers to a Maserati as a “wire-wheeled old warrior” and describes the beach he walks along with Emerson Fittipaldi as being “thronged with girls in thongs.” At Maserati’s 90th birthday celebrations at Mugello, he hears “a complexity of mechanical grunting noises, then a sudden, staccato burst of machine-gun fire. Sixteen cylinders raucously voicing their gioia di vita.” His initial encounter with Honda’s first Grand Prix car, at Watkins Glen in 1964, is introduced thus: “The sound stopped me in my shoes. A wild shriek spearing out of the new Japanese F1 sliced like a samurai sword through the dronings and raspings of the commonplace European engines. ‘Beware!’ that unearthly cry proclaimed, ‘We are coming.’” As one reads of the wonderful noises Lyons encounters on the back straight behind the pits in the dead of night at Sebring, or on the four-mile seaside straight at the Targa Florio, he has unquestionably succeeded in the goal he sets himself on his excellent website:“to put the reader in my boots at such exotic locales as Argentina, Brazil, South Africa, Japan and all the great circuits of Europe.”

Lyons has a broad canvass on which to demonstrate his considerable skills. He is equally strong on people and cars. Of Jim Clark, he writes, “He was not superhuman, really, but he showed us how super a human could be.” In the Cars section, he tries to choose his favourite F1 Lotus—how full was Vintage Racecar’s inbox that month?—and before eventually plumping for the 72 (“it looked alien to eyes that loved shapes as smooth as the 49” but eventually “my tastes . . . caught up to Chapman’s imagination”), he describes “the electric thrill” of his first encounter with an 18. It was in a Pennsylvania sports car shop, some months before Moss’ giant-slaying performances in a similar car against the shark-nose Ferraris at Monaco and the Nürburgring. “One elegant detail I recall is the front suspension. Where other cars used additional bolts and brackets to mount the anti-roll bar, this one saved weight by conjoining two pivots on one bolt. So simple, so elegant, so right!” And such an effective distillation of Colin Chapman’s design philosophy.

Another enviable skill in Lyons’ toolbox is his ability to compose killer final sentences. These must have Vintage Racecar readers wishing the next month away whenever they finish his latest column. After describing the disastrous 1975 Spanish GP—a drivers’ strike over loosely-fitted barriers, a fatal accident, a 10-minute delay before the arrival of the first ambulance, and further delays before the race was red-flagged—he asks, “Is it any wonder that the businesslike, efficient, relentlessly ambitious Bernard Charles Ecclestone, who was there that day with his Brabham team, saw a power vacuum?” He switches to pure American as he wraps up a piece on night racing, which he finds even more joyous now that digital photography, and glowing brakes and reflective graphics on the cars, have added a further dimension to his nocturnal activities: “So let that ol’ sun go down. I’m howlin’, man.” And after a delightful piece on accompanying his father Ozzie* from New York to the West Coast in an old Rolls-Royce Phantom II, he concludes simply, “Fifty years, now. That’s how long I’ve had this delicious disease.”

Essentially, Pete Lyons is a fan. He’s just infinitely better than the rest of us at expressing his feelings for great drivers, cars, and tracks. And just once in a while—“thirty-plus years I’ve been doing this, and I haven’t scored close to 30 really fast rides”—he gets to see first-hand what a great driver does behind the wheel. Of Gurney in a Toyota Supra at Firebird: “Redline everywhere. Fists two blurs on the wheel. Shifts slamming through in milliseconds, pedals all banging the floor.” Of Hulme feeling his gearbox packing up on a rally in Britain: “Absolutely nothing went out of his driving, he was still a tornado on the other controls, but every time he reached for the shifter he . . . just . . . gentled . . . it.” And, after a particularly vivid description of sitting by Petersen as he hurls a Lotus Europa around Brands while chatting to the author, Lyons writes, “That moment measured the gulf between us, and between ordinary cars and Grand Prix machinery. I was as close to my own limit as that little mid-engined Europa was to its. Ronnie was . . . bored.”

There is, of course, a tragic undercurrent to the book, and the stress of it would eventually drive Lyons away from F1 reporting. He refers to racing’s “dark side” as early as the second page of his introduction, writing “We enthusiasts have always wrestled with that. Especially in my era, when drivers were always so close to gruesome death that I, for one, tried not to get too close to them. Too often, I failed. Mourning hurt.” It is clear that Lyons suffered particularly after the deaths of Pete Revson and Mark Donohue, and the undercurrent finally surfaces in an emotional yet balanced piece called “Confronting Demons.” He describes the widely conflicting reactions to Jackie Stewart’s safety campaign of the early 1970s, when he himself wrote of the need to “police ourselves or we will be policed.” His hero Denis Jenkinson’s reaction was angry: “If we carry what you say to the end, we’ll give up motor racing.” “Yet,” writes Lyons, “I am sure Jenks had no more desire to keep on writing obituaries than I did.” In acknowledging that we didn’t have to give up the sport we love, and that at its best, motor racing can still be wonderful today, Lyons delivers another of those killer final sentences: “Bottom line, I wish Mark and Revvie and all the rest were here to enjoy it.”

Almost 70 b/b photos illustrate the essays. They are a family affair: most are taken by Lyons himself (head-and-shoulder shots of Gurney, Redman, and Graham Hill are particularly good), and a dozen are Ozzie’s work (stand-outs include Fangio, dressed in a raincoat, setting his own tire pressures, and Taruffi pushing his Lancia towards the Sebring pits and, therefore, instant disqualification). Two of my favorites were taken by the women in Lyons’ life. The reflection of his mother Gerry can actually be made out in the windscreen of the Phantom which Pete and Ozzie are working on, and one of the cover images, of Lyons sitting in Stewart’s Tyrrell, was taken by his wife Lorna, who came up with the idea for the book. The image is shown in full as the frontispiece, and while it is not hard to compose what amounts to a simple paddock shot, it still needs composing. Lyons’ beaming face, the intakes he so loves sitting atop the Cosworth V8, the contrasting positions of the drivers’ names on Stewart’s car and the sister vehicle of Cevert, the opposing diagonals of the mirror support struts and the team transporter in the background, and the quizzical look of the mechanic wondering what Mr. and Mrs. Lyons are up to . . . this is a very well-composed shot.

Whatever form of racing you like, and Lyons has loved many, on several continents, buy Fast Lines for the quality of its author’s word-smithery. And because it may be some time before Volume II is published, you might as well take out a subscription to Vintage Racecar while you’re at it.

*Ozzie Lyons was himself a gifted photojournalist, an early US correspondent for Autosport and editor of the Rolls-Royce Owners’ Club’s magazine, The Flying Lady.

Posted Under: Racing, Rally | Author: Paul Kenny | No comments yet