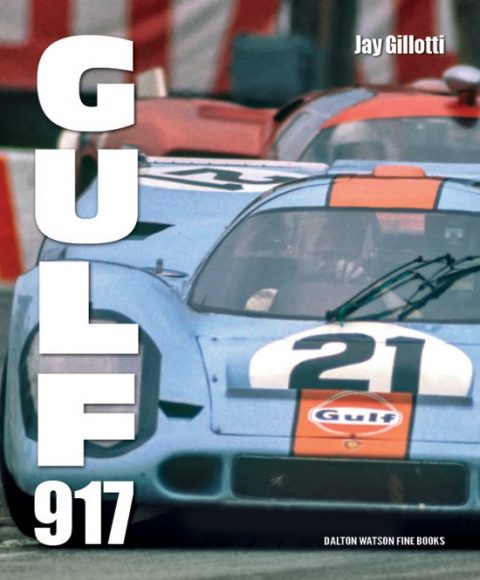 “To most sports car racing fans and Porsche enthusiasts, this lineage is familiar: 904/906/910/907/908, then the 917. However, the Porsche 917 was not just the crowning iteration of this line of endurance sports racing cars. Purposeful, beautiful to look at, perhaps arrogant, and brutally fast; the 917 dominated its era.”

If someone who has honed an interest in something for decades decides there’s something missing from all the books and articles he’s ever read, who is one to argue? It was in the 1990s that author Gillotti realized something about himself: his forte was not knowing something about everything but, well, the opposite, to be a specialist as opposed to a generalist. And that specialty would be the Porsche 917, a car that caught his imagination after watching the movie Le Mans twenty years earlier. Over the years, he squirreled away in his memory everything he ever read or saw about the car, so, in a manner of speaking, he hit the ground running when he decided to make a Porsche 917 book his post-retirement project. (He provides here an extensive list of source material including even YouTube footage of races.) 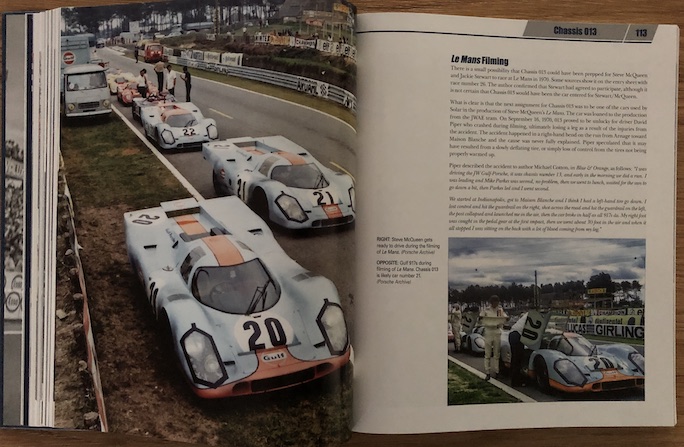 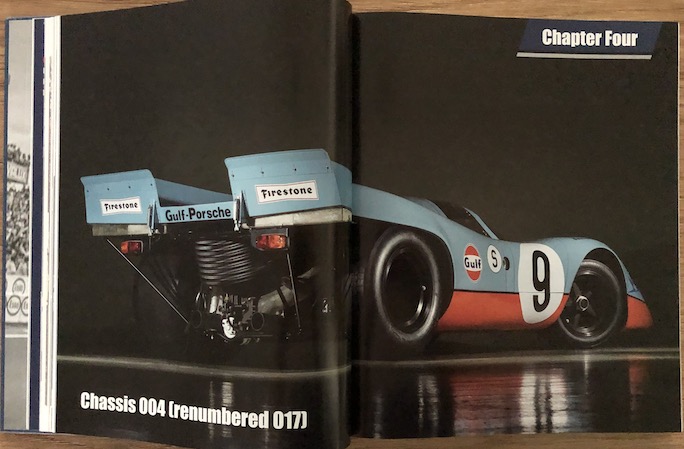 The 917 is a vastly important race car, with a commensurately vast body of literature surrounding it. Gillotti’s book is so sophisticated that you’d never think it’s his first one! Considering that his biggest “problem” in writing it was to whittle the contents, and especially the photos, down to the present 496 pages one can only think that there must be plenty left for more. Moreover, this present book only covers a subset of the 917 story, the collaboration between Porsche and Gulf Oil-backed John Wyer Automotive Engineering involving 14 chassis. This partnership made the unruly 917 first drivable and then so indomitable that it was ruled right out of existence. While Gillotti is right in saying that his book will make 20 lesser ones superfluous, you will want to have access to certain other books (at least all the ones we reviewed elsewhere on SpeedReaders) to get the full picture. 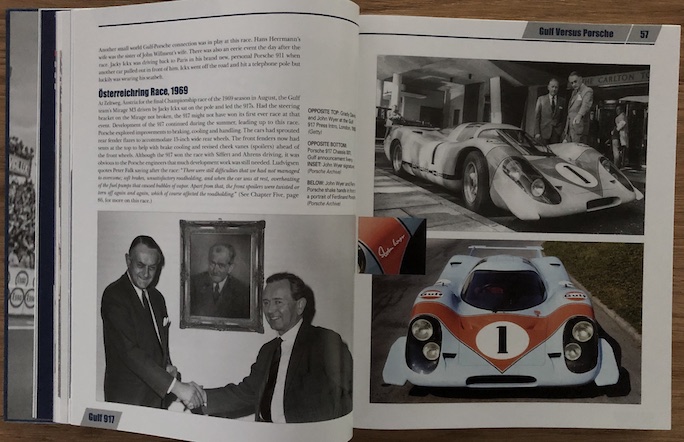 How serious this book is to be taken can be seen in the fact that the Foreword is by none other than John Wyer’s chief engineer, John Horsman, the man who made a car that drivers hated to drive stick to the road and go where it was pointed. As he writes, Porsche would have figured it out eventually, but JWAE saw the light first. Also, and this is a real coup and definitely a tidbit other books do not have, Horsman allowed the actual Race Data Sheets (below) he compiled back in the day to be reproduced here; they list everything from weather conditions to caster angle for a specific chassis in a specific race and are surely new to the general public. 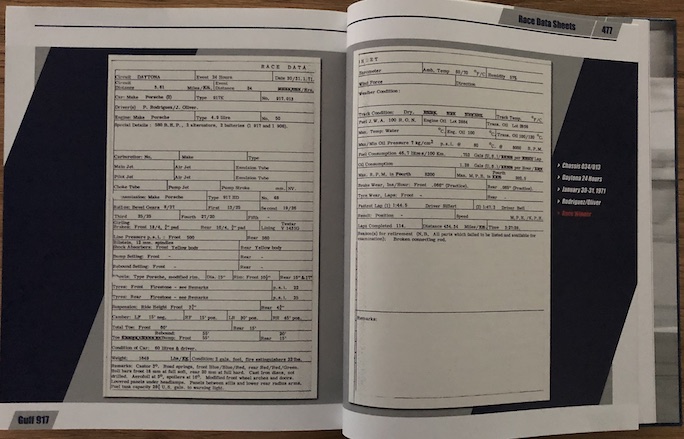 The book begins with a few pages of general Porsche history, followed by another few of 917 predecessors which then segue into a recap of 917 design and development. This is as good a time as any to say that Gillotti is himself a long-time Porsche owner, active in the Porsche Club of America, and personally acquainted with some key figures in the Gulf 917 story, all of which giving him an uncommonly wide frame of reference. Not least, there resides a 917 right in his area, the Siffert/Redman car (chassis 017/004 in Gilotti’s new way of expressing the numbers). 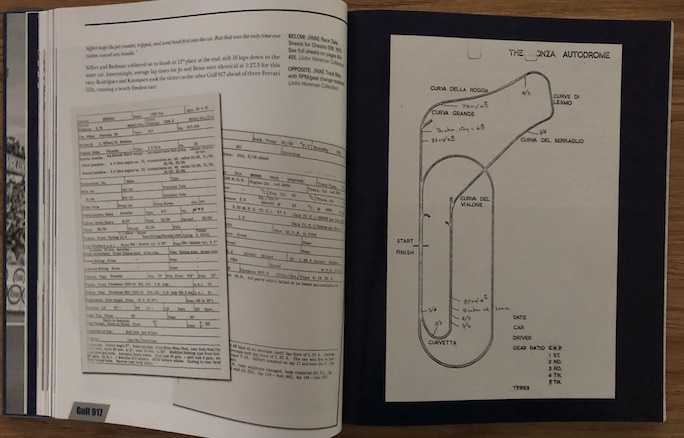 With the preliminaries out of the way, the narrative switches to a chassis by chassis, race by race account (including post-Gulf history). A few data points here are new to the record, stemming from newer or better-reconciled and -vetted research. In all but two cases Gillottti has been able to talk to the cars’ current custodians but even so some gaps in the data remain, largely because chassis numbers were exchanged in period or, as so common with working racecars, modifications took place. Still, it is safe to say that this book is as accurate as the state of the art permits. 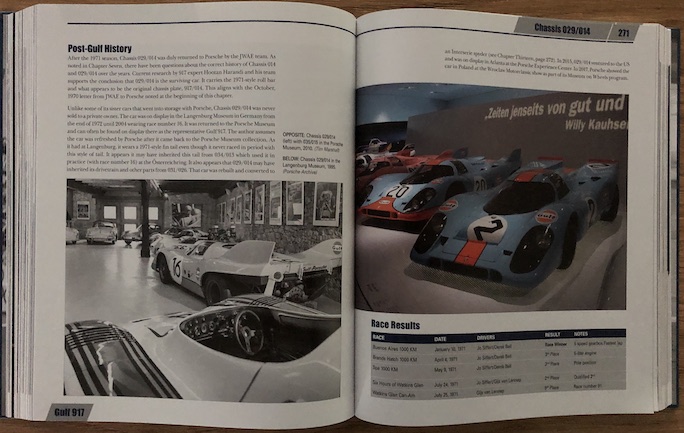 On the photo front too the book offers new bits inasmuch as some of the photos are sourced from privateers who never intended their snaps for publication. Also some of the images from the inexhaustible Porsche Archive appear to be new to the printed record. There is, of course, that handful of ubiquitous photos you’ll find in any 917 book, such as the famous shots of the 25 homologation cars all lined up. The captions are a bit on the scant side but contain the essentials. 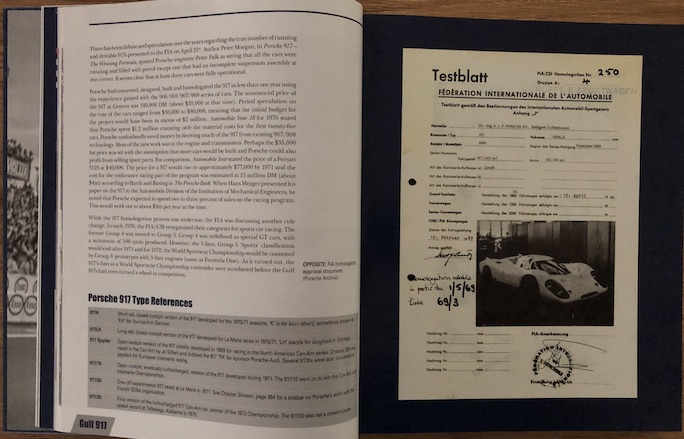 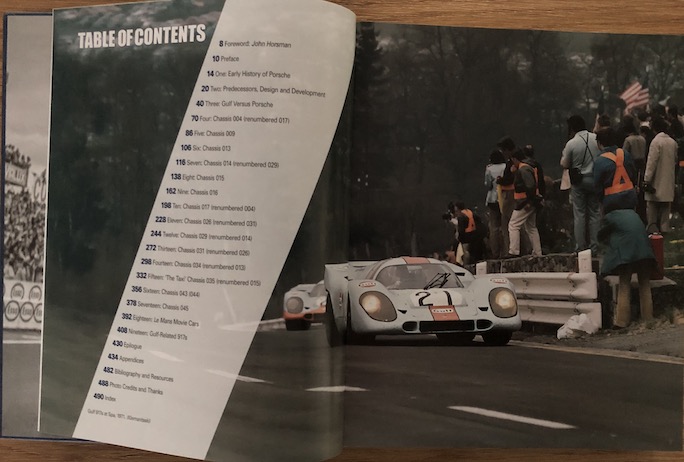 Bibliophiles need to know no more than that this is a Dalton Watson book and up to the usual high standard. It is common for this publisher to release a more upscale and even more limited Special or Publisher’s Edition but in this case that version is not the same as the Standard 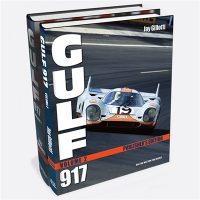 Edition but contains 150 additional pages of “bonus material” plus 170 additional images, bound as a separate volume. Limited to 200 numbered copies the disproportionately higher price of $350 for the set is probably due to the fact that each is autographed by Derek Bell, Brian Redman, John Horsman and Gillotti—which is probably also the reason it’s already sold out.

As an aside, Gillotti’s motto in life is “Be good/do good.” Well, he has certainly done good putting this excellent book into the world!