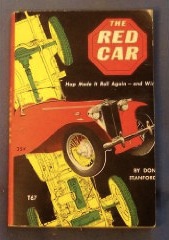 “It was red, fire-engine red. It was low, as Steve’s MG was low, but it had none of the chunky look of the yellow car outside. This one was lean and racy and angular, with fenders that made no attempt to curve or blur into the body lines, but stood out in a clean sharp sweep over the wheels.

“The wheels were enormous; they were almost ludicrous at first glance. They were gleaming silvery wire wheels, standing high and narrow with the rakish scarlet body of the car slung low between them, looking even now as though it were crouched close to the ground, ready to spring forward. The car looked almost alive. It had a personality all its own–an arrogant, insolent, challenging way of looking you right in the eye and saying ‘Drop dead!’”

The above passage is from a slim paperback novel called The Red Car. It was written by Don Stanford and published by Scholastic Book Services in 1954. The car he is talking about is a 1948 MG TC roadster that Stanford’s main character, sixteen year-old Happy “Hap” Adams, is seeing for the first time. The car has been heavily wrecked by having been driven off a mountain road and young Hap hatches a wild scheme to bring the little sportscar back to life. There are certain defining moments when you are growing up. Events that shape your life and your future. For me it was finding a copy of The Red Car at the public library when I was twelve years old.

Don Stanford was a magazine writer in the 1950s. He lived in Norfolk, Connecticut and was also an amateur racer. His experiences while racing in Colorado led him to set The Red Car there. Although Stanford had already written stories and serialized novels for True magazine and others, The Red Car was his first novel specifically written for a younger audience. The book was quite popular in its time and had its fifth printing in 1965.

The story is a straightforward one, and is filled with references to the importance of truth and respect for parents. This was the 1950s, after all. But, beyond all of the admirable values and lesson learned by Hap Adams, is a kind of blueprint of how to be a sportscar enthusiast of the first order. When the book first came out, this was important. Sportscars were still relatively new to American highways and it is clear that Stanford wanted to convert as many young people to the cause as he possibly could. He explained why these cars are the way they are: “The little car rode hard: there didn’t seem to be any springs under it at all. It bounced and jarred and danced over the road; but it was instantly responsive to the slightest touch on the steering wheel–and Hap could see that it wouldn’t be, if it were floating along on mushily comfortable springs, there would be too much sway, too much give in the spring to compensate for. Comfort in this case, was well-sacrificed to precision; the car felt sensitive and spirited, but you felt you could really depend on it.”

To explain the intricacies of sportscar driving and racing, Stanford invented the character of Phillippe “Frenchy” Lascelle, a French nobleman and racer who had moved to the United States under mysterious circumstances and opened a garage in Hap Adam’s hometown. Frenchy helps Hap repair and rebuild the wrecked MG and then teaches him how to drive a sportscar. “He tapped the big dial of the tachometer with a finger, and the gesture seemed to remind him that Hap was beside him. He turned, his eyes were alive again; he said with emphasis, tapping the dial of the tachometer: ‘It is with this instrument one drives this car, Happy, not with the speedometer, there. When you have a little engine, a good engine but an engine that is not big, you must learn where is her best power, and you must drive her there, eh? An engine has a power curve, Happy: when she goes slow she must fight to turn herself over before she can do anything else, before she can work for a car. When she goes a little faster her momentum helps her to turn herself over; then more of her power can work for you. But when she goes too fast, she is not efficient anymore, the curve comes down again. And there is a point she will break, if she goes too fast. You must learn to know your engine, Happy. You must find the peak of her power curve, the speed where she is happiest working for you, where she delivers the most power. And there you must drive her, always. To change speeds you have gears; you do not put such a car as this one in the wrong gear and simply use the engine to make her go faster or slower. She does not have the extra power; she has only what she needs. But she has all she needs!’”

To a twelve-year old, these words were like some sort of secret magical code. To learn them promised entrance into a secret society. One filled with exotic racy cars and seductive women. Yes, Stanford also had several women’s roles in his novel, somewhat stereotypical, as this was the fifties, but at least women weren’t excluded from this view of sports car heaven.

The mid-fifties were a time of controversy in American sportscar racing as the concept of amateur versus professional drivers was at the forefront. Stanford doesn’t shy away from the subject and creates a road race in the streets of Hap’s hometown to strongly favor the idea of gentleman amateur drivers. “‘There isn’t any rule against that, no,’ Les Bailey answered, and now there was cold dislike in his voice, ‘although we’d’ve made one if we’d known your friend was a hotshoe professional driver. This isn’t that kind of a race, Mister. This is a quiet little get-together for amateurs; for novices, mostly. It isn’t a Grand Prix, and it isn’t for blood, and it isn’t for the record. There aren’t even any trophies, to amount to anything; this one is for fun. And I don’t think John Arata drives for fun! How’d you do at Le Mans last year? How about the Carrera Pan Americana, the Mexican Road Race?’ ‘Not bad both times,’ Arata said, sneering. ‘And you forget, kid. I can drive professional out of the country, if you’re going to bring that up, and it doesn’t affect my amateur standing in the USA.’”

This is pretty heady stuff for a kid’s book about sportscars and it was hard to read it without feeling like you were being drawn into a battle of amateurs against professionals that had already been fought and lost by the time I read The Red Car at the end of the sixties.

I found my copy of The Red Car over the internet. It was in a used bookshop in California and the price was $3.00. Reading it now, as an adult, I expected to find it childish and simplistic. I have been lucky enough to drive a wide range of different automobiles and even to race a fifties MG. But, just as I was 30 years ago, I was drawn into a world of sportscars and gentlemanly driving that only exist today in the memories of those who took part in these earliest days of the sportscar movement. Maybe it’s not a definitive history, nor great literature. But this slim book captures the spirit of the time, a spirit that many are trying to recapture at vintage race meetings around the country. This book should be required reading for everyone who likes old sportscars, no matter what their age.

Don Stanford dedicated The Red Car to his son. The inscription sums up the entire early sportscar era as well as anything written in the period: “To Donald K. Stanford, Jr. and to other boys of all ages who admire fine cars and good sportsmanship.”