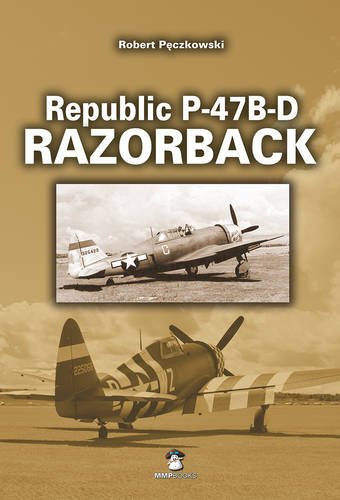 Hey, is your fuel tank made of paper? This is not just a question for the scale modelers who will lap this book up but for the pilots of the real thing! The P-47 Thunderbolt, or “Jug” had auxiliary tanks made of plastic-impregnated paper that lasted just about . . . one mission. Upside: fly longer sorties. Downside: may rupture and/or explode when landing.

But that’s not what made the World War II Thunderbolt famous (there’s a modern Thunderbolt too, the Fairchild Republic A-10); being the largest single-engined fighter up to that time and in bomber configuration able to carry more than half the payload of the B-17 did.

Aimed specifically at the interests of scale modelers, this book covers the early versions of the P-47—one look at the bottom photo on the cover explains why it’s called Razorback. The spline on the top of the fuselage obviously infringed upon rearward visibility which is why the other main version of the Thunderbolt is the Bubbletop; it is the subject of an earlier book in this same Yellow Series and by this same author (ISBN 978-8361421276). While the bubble canopy was introduced on some late D models, which are the topic this present book, only passing reference is made to it here. Also mentioned are the Ds produced by Curtiss-Wright and labeled 47G.

These books are not model or operational histories and touch on those aspects only in passing. Instead these are books full of technical detail of the “which rivet goes where” variety, bristling with photos (some in color!) and drawings of micro detail and, naturally, scale plans (1/72 here) and paint guides in the form of color profiles. 1/72 is of course much too small a scale to make use of the plethora of, say, cockpit gauges or tail wheel strut springing or oil flow diagrams so maybe restorers—or gamers—would benefit from these books too. Several photos show survivors and restored machines.

Pęczkowski is a seasoned MMP author and editor. After a brief Introduction (which does mention the curious fact that both the designer and the manufacturer of this quintessential American heavy are Russian but not that they were born in the same town) the book goes right away into heavy-duty detail discussions of such minutia as canopy operation and at what serial number the landing gear tire tread was changed. And we’re still only on page 5. So, if this is the sort of thing you need, this is the book.

The color profiles (here by Zbigniew Kolacha) are, as always, a thing of beauty and show one side or the other, an occasional top/bottom view, and details such as gear up/down and external stores etc. The captions are extraordinarily specific as to pilot/squadron etc. but a little light on some of the technical bits a newbie reader will be apt to not notice. Uncommon for books in this series, one drawing shows an aircraft in flight. It shows the pilot and so gives a good sense of proportion but the P-47’s enormous size is even more dramatically driven home by a series of b/w sideviews on which are superimposed the outlines of an FW 190, Zero, Spitfire, Bf 109, and Mustang to which various performance parameters are compared.

If this book is even on your radar you’ll already know that the P-47 was used by a number of services and so one each in RAF, French, Japanese, Chinese, Russian, and German colors is shown (but none in the markings of the Mexican and Brazilian squadrons that fought alongside the US).

MMP books are produced in Poland and sometimes a bit weak in regards to English grammar and syntax but this one is pretty much flawless. For the money, these books are extraordinary value (hardcover even). If more plans, and larger scales (1/48, 1/32) are needed, there’s a book for that too: Scale Plans No. 20 (ISBN 978-8363678753) and No. 8 for the Bubbletop.

The Whole Maghilla »
« The V12 Engine