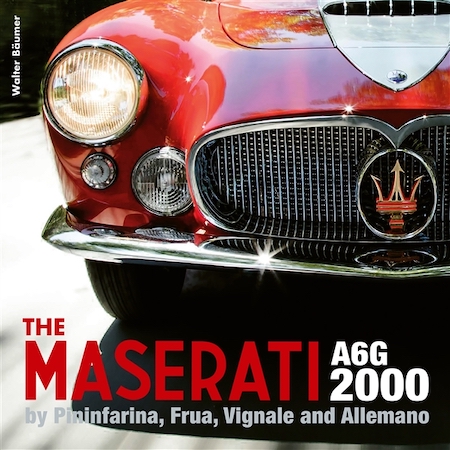 Serious Maserati books are not exactly plentiful. When we reviewed this author’s first one in 2009 we expressed wonderment that anyone could make a living being a full-time Maserati researcher. In 2004 Bäumer (b. 1954) traded a career in international fashion photography and art direction for one as a car broker / consultant and started International Maserati Research in 2008. By that time he already had several decades of living with such blue blood classic sports cars as a Gullwing Mercedes, various Ferraris, and a Lamborghini Miura SV under his belt. 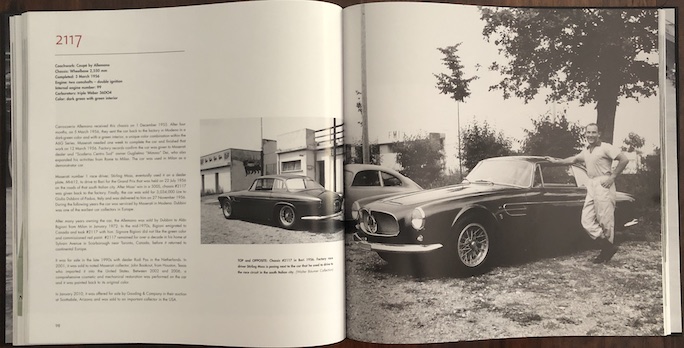 During his time as a Maserati works driver Stirling Moss had the use of an A6G during the 1956 Grand Prix in Bari.

At any rate, things must be going alright because this is now his third Maserati book with this publisher (one of which already reprinted a second time) dedicated to a specific model. In fact, this latest book is the second time he covers the A6G 2000 model (1951–57), expanding the scope of the first one which was limited to Zagato coachwork to now introduce coachwork by Frua, Pininfarina, Vignale, and Allemano.

Except for saying in the Preface that “the Zagato cars are not the complete story” the new book makes no reference to the previous one. In an ideal world you’d have both because the new book contains no backstory but rather starts without any big-picture preliminaries right out of the gate with a chapter on “Technical Development” and then introduces the coachbuilders covered here, without any further mention of Zagato. 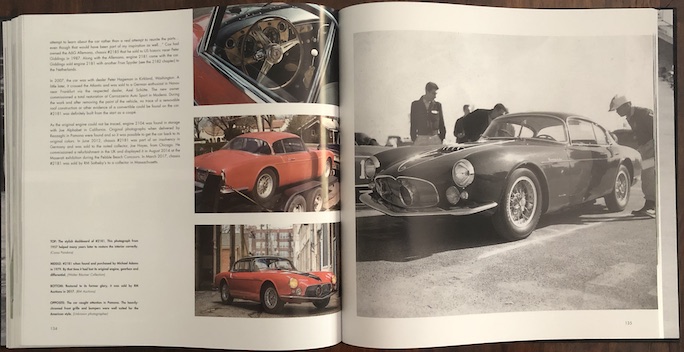 Good thing chassis #2181 didn’t stay with its first owner very long. Fred Astaire seemed to have liked the “idea” of owning neat cars well enough to keep buying them—but he did not drive them.

The first A6G 2000 was completed in December 1951 so this book appearing in 2021 is surely to mark the 70th anniversary of that event. It is worth pointing out that in the 1950s Maserati stood for competition (winning, for instance, the F1 World Championship in 1957) and by the 1960s their road cars represented the pinnacle of luxury, costing more than comparable  Ferraris. This is relevant to this book only insofar as at some point, and absent any sort of context offered in it, a reader will wonder why these clearly excellent A6Gs did not succeed in making a bigger dent in the universe. For a fully fleshed-out story on that that you’ll have to consult other books, but, it is reasonable to presuppose that the people interested in a book like this with such a singular focus have already internalized the bigger picture. There is, however, one practical consequence of Maserati as a firm, not just these particular models, waning: keeping fastidious records about the cars was not seen as relevant, and this directly affects the source material Bäumer has to work with. 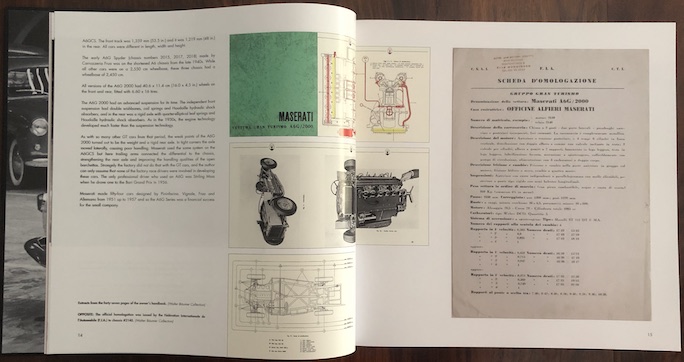 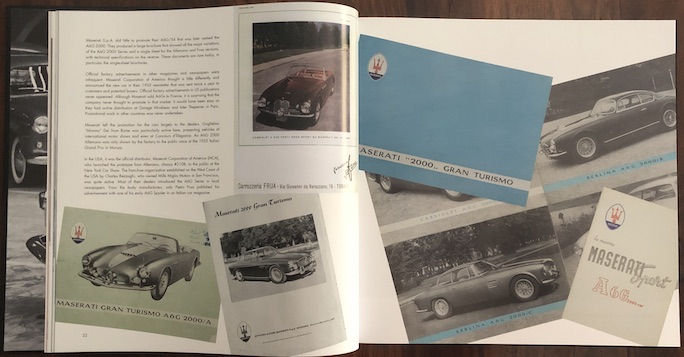 As the Zagato book, this one proceeds in order of chassis number, presenting 54 bodies on 53 chassis. The level of magnification varies greatly, as does the availability of period photography. Moreover, not all cars have survived and their trail has gone cold long ago. Bäumer’s firm can be hired to do automotive research and obviously has its own archive as well as connections in the collector car world. It follows that when there are gaps in the chassis histories gathered here, it is not for lack of trying. What Bäumer’s just-the-facts approach does is set a new baseline for what can be verifiably known about these cars. In one particular case, #2181, this allows a correction to the existing literature which for years assigned a Spyder body to this chassis when it really was a Coupe (bought new, incidentally, by entertainer Fred Astaire who liked cars—but never drove them!). In another case, #2015, the clipped narrative contains sets of numbers that an inattentive reader might not at all recognize as worthy of further thought: how does a car sell new for 3.6 million lira, then sell two years later for a mere 100,000, another two years later for 10,000, and yet two more years later for 800,000?? Barring a systemic reason such as, say, currency reform (there was none) there surely is a puzzle begging to be solved here. And what about that one A6G that an enterprising mechanic/owner converted to rhd (#2126)? Bäumer can only tell us who did it and about when, and there is even a photo, but some excitable people will surely grumble and think it a loose end. In principle, there is no demerit in putting pen/keyboard away at a fixed moment in time, otherwise no [nonfiction] book would ever see the light of day.

As mentioned earlier, Bäumer used to be an art director. He and a fellow photographer are credited with the book design. It’s straightforward and serves its purpose and, always a bonus, is clear and consistent. The proofreading, on the other hand, is not. Commendably, there is an Index, divided by chassis numbers, organizations (e.g. dealers, auctioneers etc.) and proper names.

1994: The Untold Story of a Tragic and Controversial F1 Season »
« Jaguar D-Type, The Autobiography of XKD 504