The Practically Free Sportscar: The Beginner’s Guide to Owning the Ultimate Roadster 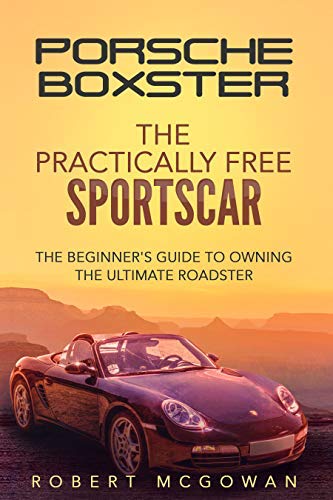 We reviewed the author’s earlier book, Porsche 911, The Practically Free Supercar, in 2019 and the Boxster book follows the same format. This is another self-published work and the author again allows his endearing enthusiasm for the marque to be the abiding theme of the book. Don’t expect a coolly objective approach though—at one point McGowan tries, and fails, to compare the Boxster with its possible rivals, including the usual suspects from BMW, Mercedes, and Lotus. It is far from a forensic comparison, with the rivals being summarily dismissed on the unarguable ground that “the Boxster is a Porsche sports car whereas all the others are simply not.” Can’t argue with that, Robert . . .

One of our criticisms of McGowan’s 911 book was the amount of space wasted, in an already short book, on a guide to the history of the marque and I am pleased to note that this book, while longer, does not have anything like as much filler. There is some discussion on the Boxster’s spiritual forbears, including the 550 Spyder and 718 RSK, but this is brief and much more to the point, as the author has sharpened his pen since his first book. I was surprised (shocked, actually) to be reminded just how long the Boxster’s back story now is. The Boxster concept car was unveiled at the Detroit Auto Show in 1993, a date now almost as much obscured by the mists of time as the Porsche 912’s debut had been in 1993. 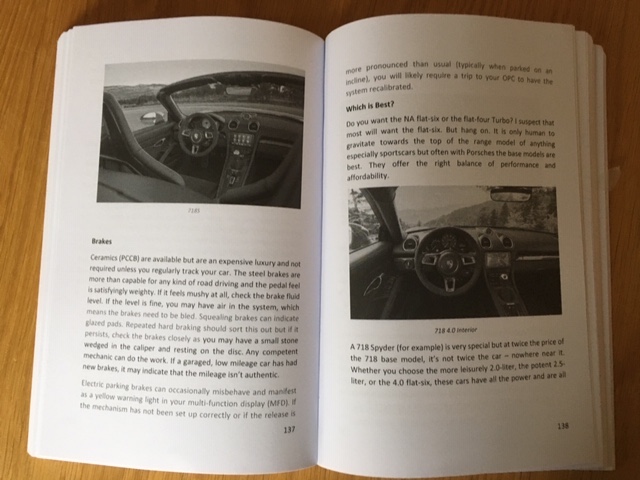 The book contains a mixture of detailed model description and buying advice supplemented by personal anecdote, an approach familiar from the 911 book. There is also again a certain amount of what the more cynical reader might dismiss as psycho-babble, such as this Andrew Carnegie-inspired technique to getting what you want: “This means  when your subconscious mind accepts something as truth (be it factual or fantasy), it starts to become your reality.” And more in the same vein. But who am I to criticize? At least the author attempts to address the biggest hurdle to treating yourself to a Porsche —convincing yourself that you both should and actually can do so. And he does it in a voice that is conversational and vernacular, if sometimes with a slight whiff of the locker room. 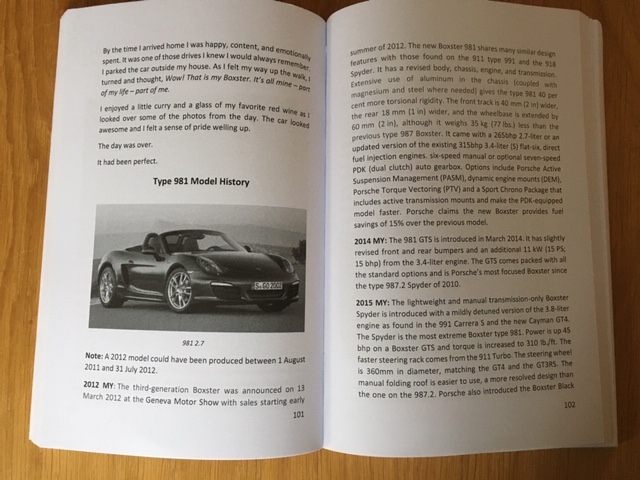 This book would benefit from some sub-editing, if not (mercifully) as much as its predecessor. There are far fewer typos, and the book has a more professional and coherent feel to it. There is a lot of information offered in this book, and if it is presented in a sometimes scattergun style, that may well reflect the many and varied hopes and fears of a first-time Boxster buyer. I am curious, though, about the target audience as, although the spelling and usage is US English (liter, trunk, color etc.), prices are given in pounds sterling (McGowan is Scottish). But that is only a minor quibble—after all, aren’t we forever condemned to be “two nations divided by a common language,” in George Bernard Shaw’s words?

Who should buy this book, in a world already groaning under the weight of libraries full of works on the marque? Nobody is likely to read this book, your reviewer apart, who isn’t a prospective Boxster buyer, or seller. But there is no shortage of either, and many of them will be, or become first-time Porsche owners who will benefit from the practical and reader-friendly advice here. It’s portable too, at just 6 x 9 inches, and I expect more than a few copies will likely become patinaed by oily fingerprints as their owners explore the nether regions of a pristine 987 or a growly old 986. There’s lots of small b/w photos too and, who knows, some of them may reduce or even eliminate the incidence of IMS-themed nightmares in the reader.

So, can the Boxster really live up to its title of being a “practically free” sports car? Sure it can—but only if your “man maths” is good enough. 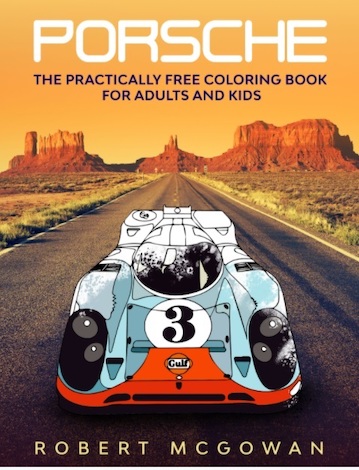 No matter what you think of the Boxster’s technical and performance merits, there is no arguing that it is a beautifully proportioned, good-looking car. There’s no better way than drawing one to get a feel for the lines—but if you can’t draw, then color one! McGowan has culled 57 of his best-liked Porsche illustrations and photos, from the 356 to the 992 RSR and, yes, including a spaceship, and converted them to line art as a coloring book: Porsche: The Practically Free Coloring Book for Adults and Kids (ISBN-979-8696102955). “Practically free” still amounts to $12.99.

The Practically Free Sportscar: The Beginner’s Guide to Owning the Ultimate Roadster