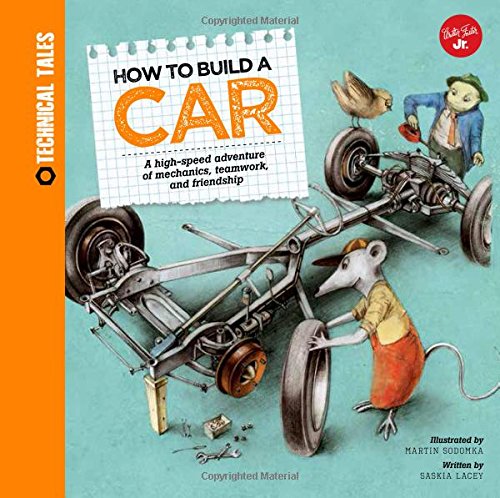 This is a children’s book designed to introduce a young mind to the world of mechanical design. It’s a simplified description of how cars are constructed, and how they work. Various key and basic components are shown, some in more detail than others. The car’s motor, for instance, is drawn to show the operation of the pistons, valves, carburetor, and the cooling system. These areas are detailed in colorful schematic cutaways, with simplified explanations appropriate for young readers. The same treatment is applied to the frame, suspension and bodywork. 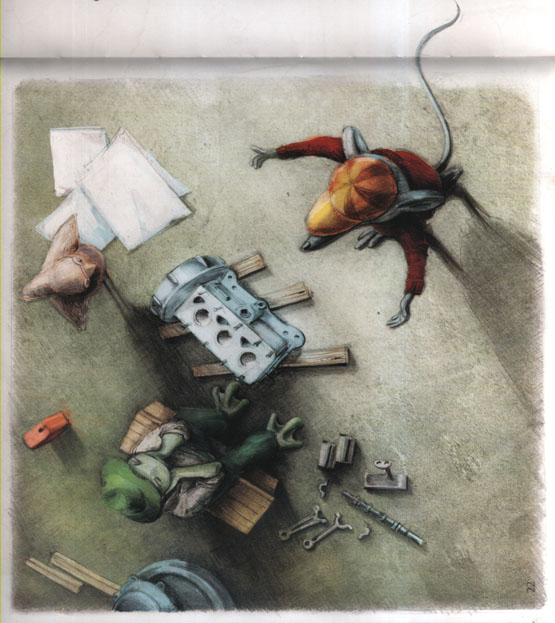 The story line is well developed with fun personalities portrayed on every page. The basic plot? A frog, a mouse, and a bird decide to build a car. So they do. Along the way obstacles are overcome and goals achieved. The end result looks like it has the interior, tail lights and truck lid off my old 1958 Alfa Romeo, set up with the running gear out of a 1923 Tatra T11. The front view of the bodywork looks like memories of a 1950s English Hillman. Quite the contraption and due, in my opinion, to Hank the Frog. He is described as a “frog with junk connections and access to high-quality scraps.” Definitely a character I recognize from my own youth when scrounging the local junkyards for neat-looking stuff. 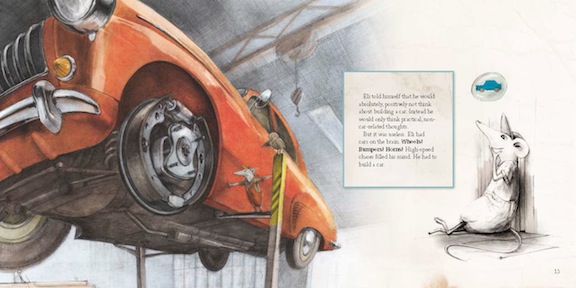 When I was a kid my parents read to me constantly, but not about mechanics. It was all Thorton Burgess “story log” nature stories, or Booth Tarkington’s Penrod shenanigans. I didn’t get my initial burst of mechanical education until I stumbled across a mint 1905 copy of Self-Propelled Vehicles. Because of the beautiful illustrations, I didn’t need to read the book to understand it. That can be said about this book as well. The drawings almost always explain themselves visually, making the book easily accessible to kids not yet able to fully read on their own. The only problem drawing for me, on page 61, shows how an old-fashioned worm drive steering box works. To my draftsman’s eye the worm gear is awkwardly drawn on three different centerlines. 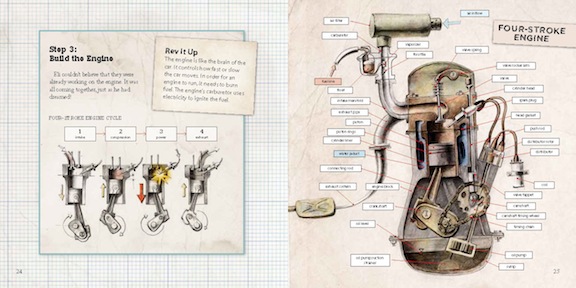 The mechanics selected for the drawings are based on 1950s technology. Old-fashioned drum brakes instead of modern disk brakes, a carburetor instead of fuel injection, and no mention of pollution controls, or computer involvement of any sort. But that’s OK, because this book is not meant to be an instruction book for making a scratch-built convertible sports car, or a treatise on the social responsibility of designing earth friendly green vehicles. Those complex topics are left for the grown-ups. 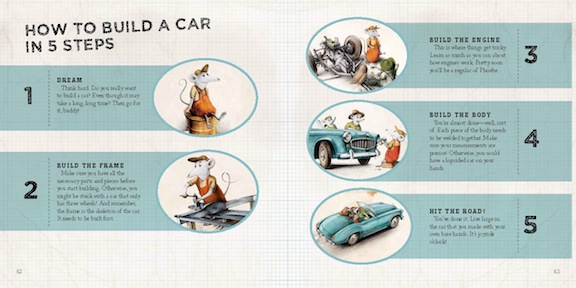 Keeping Hank the Frog’s attention focused is Phoebe the Bird’s job. She’s the brains of the outfit and acts as an engineering role model for young females. As a father of two grown-up daughters, I say, “Hear, hear!” to that. Just because you’re cute doesn’t mean you can’t be smart, too. The third member of the crew is Eli, “The Dreamer,” a shade-tree mouse mechanic full of inventive creativity. All three of these little creatures are great fun, and interact well together throughout the book. An innocent happy-go-lucky Wind In The Willows friendship permeates the story line and bonds all the creatures together.

The writing is uniformly filled with fun to read dialog and description. The characterizations are crisp and clear, with each of the three animals having unique personalities and mannerisms. The pictures are well drawn and reflect each creature’s individuality. The artistic quality of the drawings is excellent. Add in the well written story, and you’ve got a winner.

The book itself is a sturdy hardcover that looks like it stands a good chance of surviving heavy-handed kid abuse. Nice heavy-duty paper stock and a real saddle-stitched binding add to the basic indestructibility of the book. The binding is a fold-flat type, which means the book will stay open when opened, without having to hold the pages down to look at the pictures.

In the end the frog and the mouse, along with Phoebe and her girlfriend, hit the road in their new convertible with the wind in their hair and adventure on their minds. Philosophically, a perfect ending. So, throw a Burgess story log on the fire, gather up the kids, and read until they fall asleep in your lap, or the log burns out.

Posted Under: Automobiles, Youth and Young Adult (YA) | Author: Bill Ingalls | No comments yet

Keep A Knockin’, The Story of a Legendary Drummer »
« David Kimble’s Cutaways: Techniques and the Stories Behind the Art