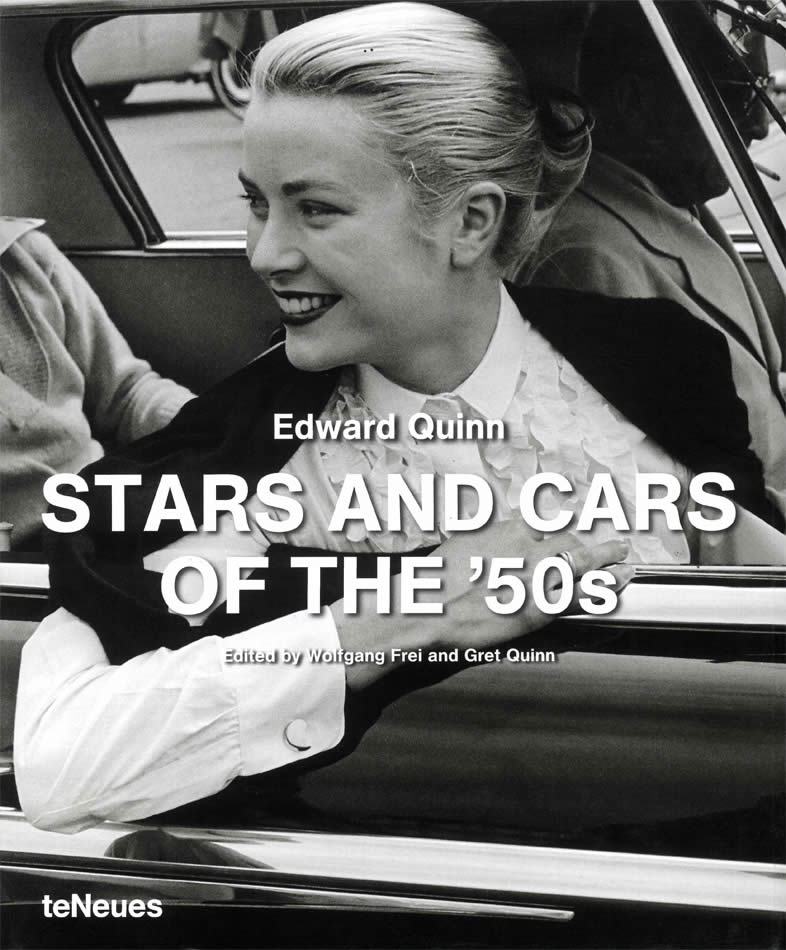 Certain books come across your radar that just make you stop, peruse, enjoy, and some of these may just stir deep and pleasant reminiscence. I came of age in the mid-1960s, and this book helped me recall, with agreeable satisfaction, certain memories of my wonder years: the dominance and flamboyance of American automobiles; Le Mans racers that were identifiable and actually resembled their sister cars in the showrooms; the sharp excellence of the black-and-white photographs found in Life Magazine; the glamour of Vogue that portrayed an era that is at once more innocent and more sophisticated than the offerings of today; and the exotica of Brigitte Bardot and Sophia Loren that kept me sleepless of some long and balmy summer nights. Stars and Cars of the ‘50s evokes these memories quite nicely. Bardot and Loren are found in the book, the former—surprisingly—in a cramped Citroën 2CV, and in another shot in a sportier Simca Aronde Week-end; the latter, the dark-haired beauty, in a 1961 Ford Thunderbird convertible. Both stars are shown several times throughout the book, sitting in or emerging from various cars. 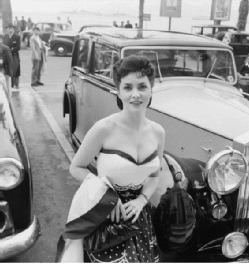 They are not alone. Grace Kelly slides into a 1955 Studebaker Commander, Diana Dors—remember Diana Dors?—rides shotgun in a 1955 Cadillac convertible, Jean Seaberg drives by in an Austin Healey 100-4, while Rita Hayworth, with her two daughters and an attendant, is jam-packed into a 1937 Fiat woody station wagon. Jayne Mansfield is pictured in the book, but not in an automobile, her Chihuahua and her bikini apparently deemed sufficient. Of course there is also a contingent of male celebrities. William Holden, obviously a collector, is shown with his 1938 Type 57C Bugatti while Richard Burton arrives in a 1955 Cadillac Coupe de Ville. Clark Gable looks so debonair in a Jaguar XK120 roadster. And although the book shows mostly stars of the silver screen, politicians, statesmen and royalty are also represented. Bedecked with sashes and medals, Prince Rainier exits his 1950 Lincoln Cosmopolitan, Winston Churchill is photographed in a Rolls-Royce Silver Wraith, Prince Aly Khan is being chauffeured in his 1952 Rolls-Royce Phantom IV, and the Shah of Persia is seen entering a car that will certainly delight Rolls-Royce enthusiasts: the “Rolls-Royce DHC Mulliner body taken from Phantom IV, chassis number 4AF6, and transferred to Phantom III chassis number 3BT15.” 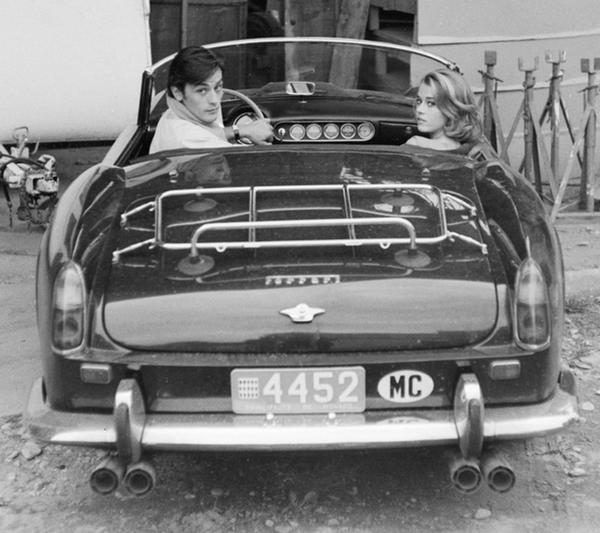 Two artists are represented in the book—Henri Matisse in a rather prosaic 1951 Chevrolet DeLuxe and, spread over several pages, Pablo Picasso in a 1949 Talbot Lago, a 1951 Chrysler Windsor, a 1934 Mathis EMY 4-S, a 1957 Lincoln Premier, a 1950 Cadillac and his “1930 Hispano-Suiza type H6B, chassis number 12293” by Henri Binder. At the end of the book, there appear a handful of photographs from various runnings of the Grand Prix of Monaco and the Monte Carlo Rallye. 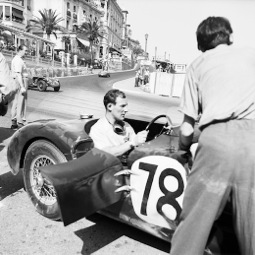 What is fascinating is that we do not see Elvis Presley or any other rock stars of the period. There are two reasons for this. Concerning Presley, he never left the USA, and Chuck Berry and Jerry Lee Lewis probably did not spend much time in Cannes, Nice or Monaco where most of the photos in Stars and Cars were taken. The second reason deals in the shift that occurred in the world scope of celebrity from the 1950s to the late 1960s and beyond, pre- and post-Warhol if you will. Presley, Berry and Lewis were hardly jetsetters, but if this book had been shot in, say, 1977, Mick Jagger, Paul McCartney and Elton John, for example, would certainly appear. Edward Quinn would surely have captured Keith Richards standing by Blue Lena, his Bentley S3 Continental. 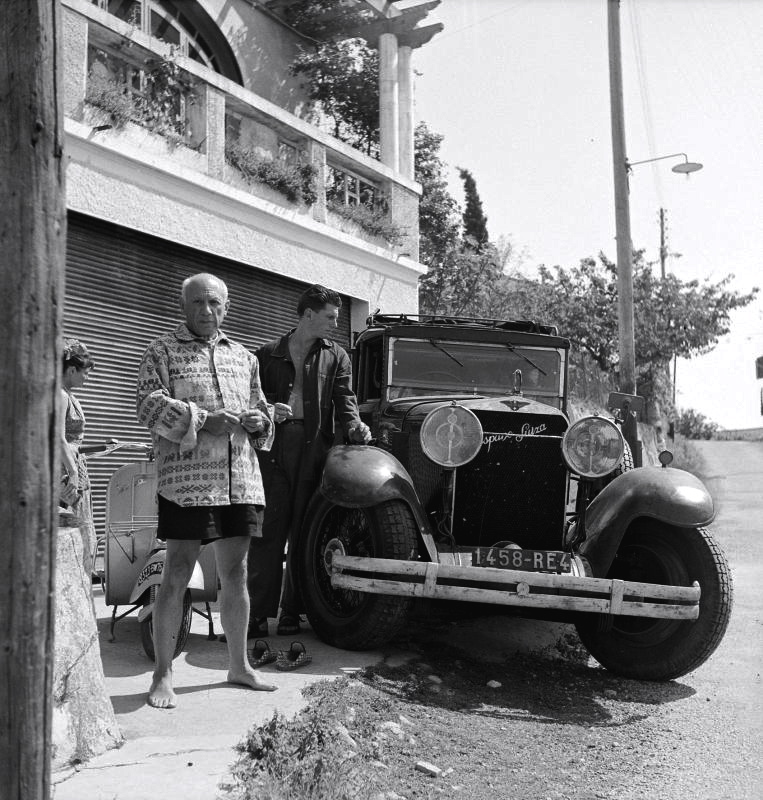 Quinn (1920–1997), who met and befriended Pablo Picasso in 1951, authored several books on the famous celebrity artist. His beat was also the French Rivera, the playground of the rich and famous, during the “golden fifties.” His Riviera Cocktail would be a suitable companion for Stars and Cars. Is he as good as David Douglas Duncan who also befriended and photographed Picasso? Do his pictures match those of Loomis Dean who shot celebrities for Life Magazine? Not quite, but it is fair to say that Quinn was more the paparazzi, shooting quickly, for example, as the stars disembarked from their cars, hurrying up the steps to the grand hotels, often surrounded by their public. Many of the shots, however, are first-rate, the seductive cover shot of Grace Kelly a prime example. And, yes, page after page affords great shots of great people in and around great motorcars.

And virtually all of the cars are identified. I say virtually because, inevitably, there are often several cars surrounding the target car—although in many cases these too are given at least cursory identification. Many cars are shown and only identified as models that would span years, “1953–1955 Opel Cadet” or “1955 or 56 Peugeot 403 limousine” being representative examples, but specific chassis numbers—see the Shah of Persia and Picasso above—are salted throughout. In a brief Afterword, Wolfgang Frie, one of the book’s editors and Quinn’s nephew, states that “many experts, members of vintage car clubs, members of staff at museums and car manufacturers have helped with the identification,” and I am sure this was the case; however, within less than half an hour of research, I was able to find the chassis numbers of one Rolls-Royce and one Bentley that were given as model designations only. Frie does invite readers to make additions and corrections and he offers a website, up and running at the time of this writing, to do so.

What is intriguing is that, for the most part, these cars are contemporary rides, most brand-new or only a few years old, many of them now esteemed classics. Also interesting is the fact that these jetsetters, along with their Lancias and Ferraris, are fond of American iron; sporty Ford Mustangs and Studebakers, elegant Imperials and Cadillacs, are well represented. And why not? This was, after all, Detroit’s Golden Age.

I very much like this book. My one regret is that I do not have the hardcover edition, which is now sold in the collectors’ market—although I could go out and buy a calendar based upon the book. Text is given in English, German, French, Italian and Spanish. An Index of both cars and stars is provided, along with biographies of Quinn, the two editors Frie and Gret Quinn, the photographer’s widow, and Jürgen Lewandowski, a German automotive journalist who wrote the book’s Introduction. I appreciate the glamour of the era, quite unlike today’s glamour world of the Kardashians, and Quinn’s eye and his lens certainly captured it well. And the cars—ah, yes, the cars.