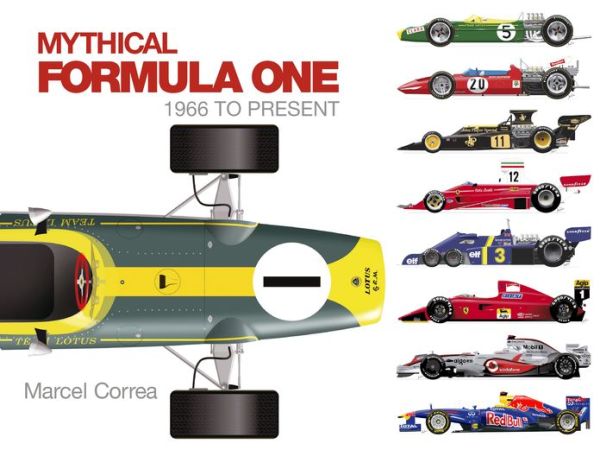 For those times when a quick visual comparison of the key features or proportions of one racecar to another is needed, photos rarely help because they show both too much and too little. A dead-on profile drawing or top view against a white background on the other hand, especially one that leaves out certain micro detail while highlighting general lines is much more useful.

This book of computer-generated illustrations of more than 50 noteworthy F1 cars does just that. Since the author is an industrial and automotive designer by trade—and an F1 enthusiast—he is able to make an informed judgment as to what to show and what to omit. In other words, the point here is not to accurately render the cross-hatching of seatbelt webbing or the placement of rivets but to show, say, suspension mounting points or aero aids to give an understanding of basic geometry and spatial relationships. This is further helped by the fact that most drawings are either in identical scale or close to it. The book is in landscape format which is ideal for this approach

Correa chose cars that are technically interesting, irrespective of their competition record, the poster child for this sort of machine obviously being the six-wheeled Tyrell P34. This particular car, which is shown here in several versions, also points to a shortcoming: the captions are so generic that it is up to the reader to figure out what exactly the specific differences or features are. Each car is introduced by a page or so of text that highlights key technical bits, design aspects and racing history, and a basic spec table. This information is presumably gathered from the handful of books enumerated in the Bibliography which, judging by the names, are pretty standard, reliable sources. Not to take anything away from Correa’s efforts, who is certainly a knowledgeable enthusiast, you’ll want this book for the illustrations and not for any in-depth information about the cars. The translation isn’t helping matters (the author’s native tongue is Uruguayan Spanish); consider one example (p. 97): “. . . halfway through the season the Scot deflated . . .  [due to] failures, especially with the electronics, which started to gain protagonism again.”

Correa also offers a certain level of anecdotal information, such as ruminations about racing numbers (does “13” bring bad luck? are even numbers luckier than odd ones? Correa himself calls his statistic “absurd”—but what do you make of the fact that number 5 seems to have something special going on?) or thoughts on color schemes.