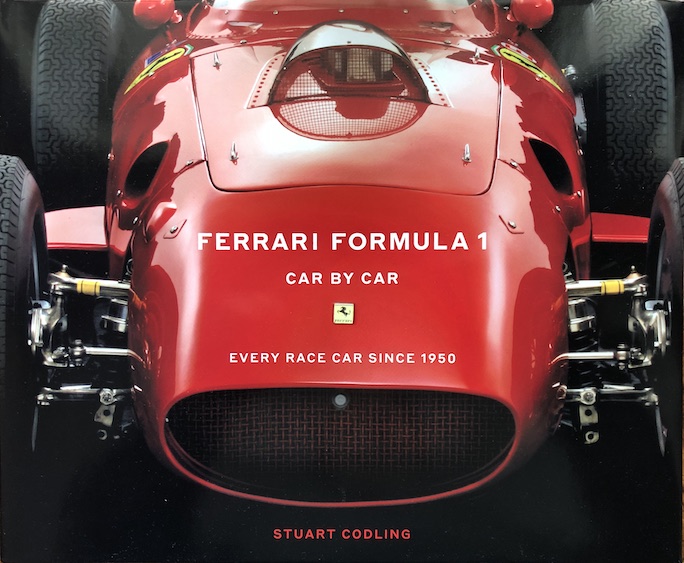 “Optimism bookended Ferrari’s decade, but between those competitive flourishes lay a wasteland of failure. Politics undermined virtually every effort to bring the Formula 1 project forward, but the underlying problems ran deeper than that. Ferrari’s very philosophy was flawed: the company was grasping for magic-bullet solutions and then flying into a panic when new approaches failed to deliver race wins right away.”

This book covers seven decades of racing, beginning, as the subtitle tells you, in 1951, and it ends with the 2020 season. If you can tell straight off the cuff which decade the introductory quote we selected pertains to, you may not need this book. (Although . . . the 17 pages of results tables are a nifty thing to have on hand, and not at all easily found in this convenient a format elsewhere!).

All (well, most) books have a Table of Contents. There is no one way to do it right but many ways to do it wrong. Obviously it shouldn’t be generic but, honestly, how many different ways are there to do one? You could pull fifty book off the bookshelf and not find another one like this. Good job, Landers Miller Design! 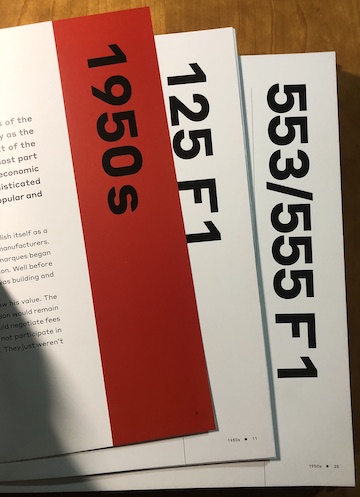 Another good example of accomplishing much with little: decades start with a red side tab, followed by model designators in BIG letters.

We could have chosen pretty much any excerpt from the book at random to give a sample of the level of magnification it brings to bear, and also to illustrate how well the author’s wide-ranging familiarity with the subject matter enables him to make sweeping, qualitative statements that would be easy to get wrong if you’re merely cribbing material. It may be an odd thing to say at the start of a book review but it serves to calibrate expectations: this is a fine book for the person who doesn’t already know everything about everything. Half a dozen stand-alone books could be spun off from just that one quote above, and learned (or pompous) debate about them be had. Codling’s book, on the other hand, maintains a uniformly macro look at Ferrari’s racing activities.

If you’ve been around motorsports reportage for a while, Codling’s name must be utterly familiar. He’s been with the world’s biggest-selling Formula 1 magazine for over a decade now, is active in motorsports TV and radio work, is a frequent magazine contributor, and has several books under his belt.

Nothing is said about the source/s for this data but there is no obvious reason to question its veracity.

Speaking of the subtitle, quibblers will moan that the 50-odd cars presented here do not encompass every Ferrari race car. In fact, the listings in the results tables would prove them right (meaning more models are listed there than discussed in the text). So, the model-by-model coverage includes only those models/types that finished a race (however, all, even DNFs, are listed in the results).

The book is divided into decades, each introduced with a page-long summary that, while necessarily brief, is on the money. This is followed by discussions (including specs in tabular form) of individual models, from as little as one page to as long as several. All are suitably illustrated with period photography; in two cases replica cars are shown; a few technical drawings shed light on noteworthy componentry. A good number of the photos are credited to well-known UK car and motorcycle photographer James Mann, a repeat collaborator with Codling.

The book has a fine Index—hooray—and it is thorough but hyper-alertness is called for because some glitches have crept into the treatment of subs.

Motorbooks is once again to be congratulated for not only selecting a useful book for publication but offering it at an affordable price that is just not common any longer.