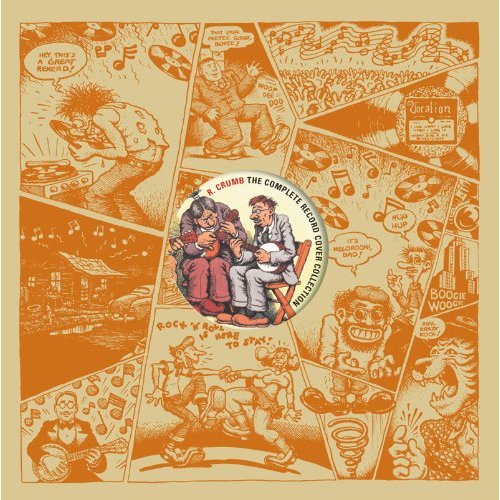 Robert Crumb has amazed, amused, distressed, rebuked, outraged, delighted, and titillated me for decades now. From his start as a greeting card illustrator to the pages of The New Yorker, it is all that has come in between on that long, long aesthetic journey that has established Crumb as a major 2oth and 21th century artist: a carnival of LSD-inspired characters like Mr. Natural, Fritz the Cat and the Doo Dah Man (keep on truckin’), sensitive portraiture, strident social commentary, outrageous sexual fantasy, devastating hippie critique, a continuing cartoon autobiography, larger-than-life sculpture derived from his cartoons, and even a complete illustrated version of The Book of Genesis. His style encompasses homage to the funny animal comics of the 1940s, realistic ink drawings, surrealism, extreme expressionism, foreboding, crosshatched cityscapes, and a nod to the various techniques of commercial illustration of the 1950s. His most well-known piece just may be the 1968 LP cover of Big Brother and The Holding Company’s (featuring Janis Joplin) Cheap Thrills. And although this particular cover art is found in this volume, a reader should not expect to find a paean to the 1960s mores of sex, drugs and rock-and-roll.

Rather, TCRCC celebrates music of a much earlier era. Crumb is a collector of 78-RPM recordings of blues, old timey, sweet, jazz, country and Cajun music; one is reminded of the seminal collection of Harry Smith as featured in his 1952 Folkways Records Anthology of American Folk Music. Crumb’s collection numbers in the thousands, and he longs for the music of, to him, a purer, more natural time, music grounded in the soul of the common folk, music less blatantly commercial than the music of today. One of his mottos reads: “Music Self-Played is Happiness Self-Made.” Crumb is himself a musician, and his group, The Cheap Suit Serenaders, since the 1970s, have been recording music based on the contents of his vast record collection. His abiding reverence for this music and the artwork that this has engendered is the premise of this book. Throughout are reproductions of Crumb’s illustrations for record covers, both for his own and for others. TCRCC also includes copies of advertisements for various musicians and albums, Crumb-designed record labels, telling portraits of musicians—his ink drawing of Lightnin’ Hopkins shows a brooding strength and endurance, multi-paged CD inserts that explore the history of the artists, cartoons and ephemera related to Crumb’s various musical interests. Among these are reproductions from some of his boxed sets of trading cards, collections of portraits of musicians he loves and respects: early jazz greats, pioneers of country music and venerated blues players. The portraits on these cards emerge as a unique hybrid of the cartoon and the fine arts drawing; Crumb has been favorably compared with Honoré Daumier. In total, all of these, the cartoons, the record covers, the labels and the portraits, represent the artist’s various styles and sensibilities.

The presentation of the book is clever. A tad over 10 x 10″, slightly larger than the size of a standard 78-RPM record, the slipcover has a die-cut central hole the size of a record label, and the actual outside covers, front and back, are monochrome except for the full-color tondo cartoons, centered, that represent the record labels to be found underneath. The overall design of the slipcover is similar to the famous Cheap Thrills cover, irregularly shaped panels surrounding the central hole, each one depicting a different cartoon, the cartoons borrowed from earlier work. What may surprise some—although I think it passed unnoticed by my local librarians—is the overt sexual content of some of the slipcover drawings. Inside, the illustrations throughout the book are assembled in chronological order, showing both Crumb’s evolution and continued reliance on earlier characters and styles. The text of many of the later illustrations is in French, and this is logical. Unhappy with America, Crumb moved to the south of France in the late 1980s (he traded a stack of notebooks for a house), and, if the later work is any indication, he has achieved a sense of contentment and ease there.

If one is unfamiliar with Crumb’s work and/or does not have any of his books, TCRCC is not necessarily the volume to first acquire; the 1998 The R. Crumb Coffee Table Art Book is even more representative of his several styles and preoccupations. Amazon lists over a thousand items under his name, and eBay has many of the original underground comics on auction (a first edition of Zap number one, as I write, is on the block for over $5,000), so one has a great deal of material from which to choose. But TCRCC would not be an unsuitable introduction, especially for those whose interests range through cartooning, fine art, record collecting and music from a gentler, kinder past.

Although I obviously admire Crumb, I must close with a warning to potential readers. His work has often been justifiably censured because some of his material is egregiously politically incorrect. Some cartoons depict African-Americans as stereotyped caricatures and some of his attitudes towards women, at least as evidenced by many of his cartoons, are reprehensible. It would be disingenuous to attempt to excuse such effrontery with any sort of postmodern, labyrinthine theory of justification.