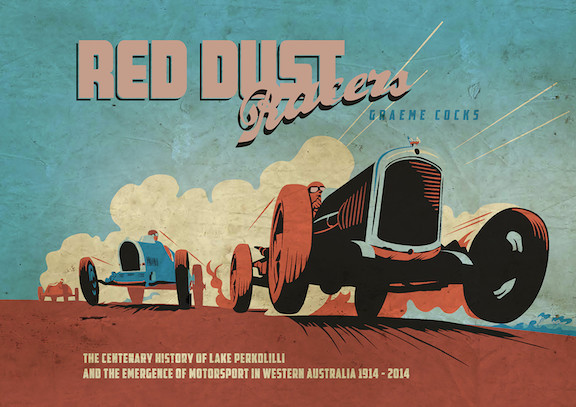 The state of Western Australia, comprising the most of the western third of the island continent, is so big that it makes Texas look small. Although it was settled in the late 1820s, nothing much happened until gold was discovered, first at Coolgardie in 1892 then in 1893 at Kalgoorlie, 370 miles inland from the capital of Perth but still less than halfway across this huge state.

In the dry inland, the horse could be a liability, so the bicycle became the popular mode of transport, the new “safety bicycle” being a much more practical cross-country machine than the earlier “ordinary” or penny-farthing.

This is the point in history at which Graeme Cocks takes up the story of the “red dust racers” in this weighty tome (almost eight pounds) that has taken him twenty years to research. The cyclists and later motorcyclists and motorists were keen to show off the speed of their machines and they soon found what seemed to be the ideal location, a few miles up the road at a clay pan known as Lake Perkolilli.

This dry lake stretched for one and a quarter miles long by about a mile wide and provided a dead flat surface that was perfect for high-speed running. To quote Cocks’ Introduction: “The rock hard surface was a revelation. They could hurtle across the landscape with a freedom that had not experienced before. There were no limits. The rider or driver could be totally at one with the machine. There were no crossings, no police, no horses or camels to get in the way, no brick walls or picket fences to run into, no tram [trolley] tracks to get caught in. It was just the cacophony of the machine, the smooth surface of the clay pan and the wind rushing past.”

Organized racing began at the lake in 1914 and Cocks covers the development of motoring and motor racing in Western Australia that led to the Lake Perkolilli races. World War I interrupted racing and some of the top racers didn’t survive the war, but racing returned to the lake in the 1920s and continued into the 1930s.

At a mile and a quarter, the lake isn’t long enough for really high-speed runs, but it is certainly big enough to set up a circular track and that’s what happened. Circular tracks of up to two miles circumference were used at various times and a “Grand Prix” circuit with hairpin bends was also marked out.

Apart from a solitary Bugatti, the leading cars were almost all American chassis, and the car to beat from 1927 until the early 1930s was Silverwings, a remarkable racer based on a 1926 Chrysler 70. This car dominated at Perkolilli, driven by Arthur Colliver, until Ossie Cranston created his Ford V8 special from a 1933 Ford. The Ford’s grille changed each year to match the current model, and by 1935 it acquired a long tapered tail with a characteristic fin on top. Other quick cars at Perkolilli included an Auburn straight-eight and a number of Overlands, a popular model on the goldfields.

All that and more is described in this substantial book. It is in landscape format, 14.25 x 10.125″, and has almost 500 gilt-edged pages in faux leather binding inside a colourful dust jacket. A thousand illustrations help tell the story of this remarkable venue that drew large crowds even though it was so far from the capital and main population center, Perth.

In the mid-1930s a new challenge for Perkolilli arose in the form of round-the-houses racing, with Albany on the south coast starting the ball rolling in 1936. Other country towns could see the benefit of having competitors and spectators descend on them with money to spend on food and accommodation. Spectators saw the advantage of venues closer to Perth or in holiday centers like Albany and they began to stay away from the primitive facilities of Perkolilli.

In 1939 Australia became involved in World War II and racing virtually stopped with the exception of the Patriotic Grand Prix meeting held on the streets of the Perth suburb of Applecross in 1940. The Perkolilli story should have stopped there, but as Graeme discovered, there was still activity at the lake.

Postwar racing was almost entirely for motorcycles although local TQ (three-quarter midget) racers used the lake for testing their cars. Other users were parachutists and hang-gliders and the lake even formed part of a rally special stage. There was also a runway marked out to be used as an emergency airstrip.

Cocks became obsessed (his wife’s words) with Silverwings, the old Chrysler Special and, when extensive research failed to discover any sign of the car’s survival, he decided to build a replica. The obvious thing to do then was to take Silverwings II back to the lake that saw the original car’s great success. The gathering at Perkolilli in 1997 to celebrate the seventieth anniversary of the original’s record breaking run is described in the book, as is a second gathering in 2014 to celebrate the centenary of racing at the lake.

That’s where the book ends, with the centenary celebration and the downpour that interrupted the proceedings and showed the participants why it is called Lake Perkolilli. 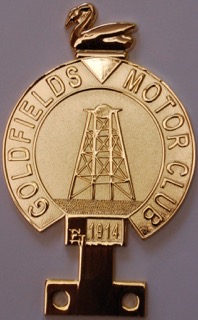 This is a book irresistible to anyone interested in the history of motorsport. It tells a story that is very much a sidebar to the mainline history of the sport, but what a fascinating sidebar . . .

Published in a limited, numbered edition of 1000, of which the first 500 will come with a reproduction Goldfields Motor Club metal car badge.