Military, Naval and Civil Airships Since 1783 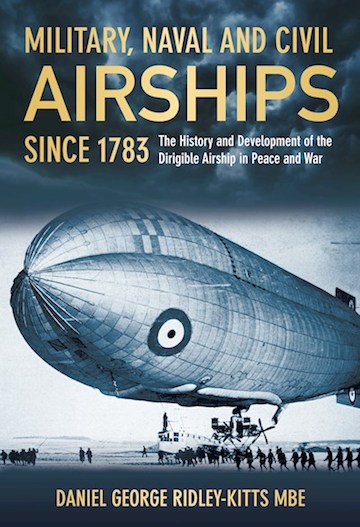 “At 2:09 a.m., just after sending a last wireless message saying that all
was well, the airship nosed gently into the rising ground at Alone (a
small village south of Beauvais, northern France), where she burst into
flame with the loss of all but six of her complement. The effect of the
disaster was to cause the government to abandon any further development
of airships.”

This quote describes the demise of the Royal Airship Works R101, a tragedy that was typical of these enormous, impressive, but ultimately dangerous flying machines, both military and civilian. Despite its checkered history, the airship continues to fascinate, with several books being published about them each year. This publication aims to be a general reference on these floating behemoths and largely fulfills its task, even including some previously unpublished information for those who have read extensively on the topic.

The book is authored by Daniel George Ridley-Kitts who worked in the British aviation industry and served in the Royal Air Force as a national serviceman. His background and enthusiasm for the subject is reflected in his writing, which shows a firm grasp of the operational and technical details of these impressive machines.

The history of the airship is covered in depth, beginning with Roger Bacon’s early speculations on a floating aerial vessel in 1250 and concluding with a modern scheme to use aerostats carrying airborne wind turbines to tap into the high altitude jet stream and provide a nearly limitless source of energy with minimal environmental impact. The majority of the book, however, focuses on the 1914–18 air war, when the airship was employed in large numbers on both sides of the conflict in the bombing and reconnaissance roles. Civil and military use of the airship in the interwar period is the second major area of focus.

Coverage of British efforts in the lighter-than-air field is very strong, with discussion of German efforts being a close second. The emphasis on British airships is not unwelcome, as the majority of books published on the topic focus on German Zeppelins. Ridley-Kitts’ coverage of airships from other nations is sparser, particularly those of France, which built a considerable number of semi-rigid types prior to and during The Great War.

Some of the material may be familiar to airship enthusiasts with an extensive library on the subject, though there are a few gems which were entirely new to me, such as the extraordinary McMechan Anti-Zeppelin Airship of 1915, a British project for a Zeppelin destroyer that was abandoned after being rejected by the government for being too small and lacking in gross lift, denying the world the sight of airship vs. airship combat over the skies of England in WW I. It would be the job of the aeroplane to counter the Zeppelin menace, which it did with increasing effectiveness as the war progressed; by May 1917, the Germans had switched over to the use of R-Planes (Riesenflugzeuge) in its raids on England when Zeppelin losses became prohibitive.

Another novel subject is the Vickers Trans-Atlantic Airship R85 of 1919, a project for a ten-engine civilian airship capable of carrying 100 passengers from New York to London. Its most notable feature was an observation lounge on top of the hull, a mock-up of which was displayed at the Amsterdam Aeronautical Exhibition in September 1919. Authorities deemed it impractical and overly ambitious, leaving it a drawing board curiosity.

The book is well-illustrated with numerous photos and technical drawings; the latter are vector graphics which generally show a front and side view of each dirigible, with occasional supplemental views of structural details. Modelers may wish that these were reproduced at a larger scale and would likely welcome a larger format companion booklet featuring these drawings with additional views, cross sections, etc. Something for the author and publisher to think about, perhaps.

The Bibliography shows a list of secondary sources going back to 1916; primary sources are not listed, though the detail in the British entries indicate that the author may have spent some time at the National Archives in Kew.

This compact hardcover (6.8 x 9.8 x 1.2″) is 300 pages long with a glued binding and glossy dust jacket. The paper has a satin finish and the drawings and photos are well-reproduced. All images are black and white with no color section. Though small in format, the book is densely packed with information reproduced in a small font, which may prove challenging to read for those with deteriorating eyesight. An Index is
provided.

I highly recommend this book to those with an interest in the subject—it will captivate both the casual reader and the ardent enthusiast.

Military, Naval and Civil Airships Since 1783:

The History and the Development of the Dirigible Airship in Peace and War
by Daniel George Ridley-Kitts MBE
The History Press, 2012

Posted Under: Aviation | Author: Jared Zichek | No comments yet