The Science of Formula 1 Design: Expert Analysis of the Anatomy of the Modern Grand Prix Car 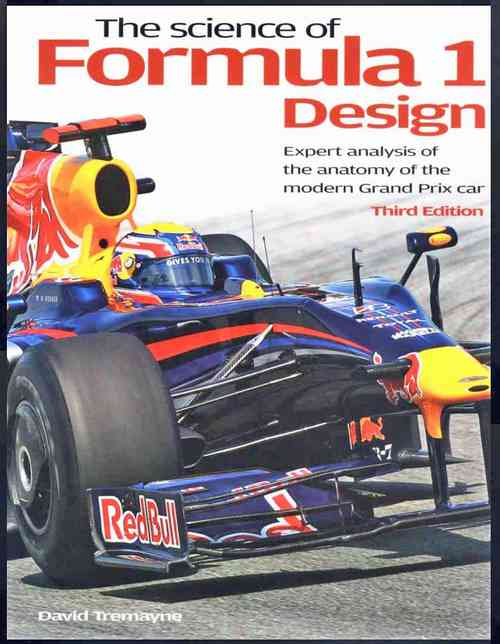 This book cleverly walks the tightrope of being both a technical book and one that will appeal to the reader who wants to understand more about the technology that goes into a modern Formula 1 car.

The book is divided into chapters that focus on different elements such as engine, electronics, brakes, and tires and while this may sound a bit dry and formulaic, the author’s easy style quickly dispels any notion that this might be a dry textbook. This is also helped by the numerous color pictures and beautiful color line drawings by Giorgio Piola that really highlight the point the author is making, so even if you do not really understand the intricacies of pneumatic valve actuation, for example, a study of the images accompanying the text helps to give some insight into the technology.

As is to be expected, the book is right up to date with pictures and narrative from the 2009 season. Tremayne is a seasoned Formula 1 journalist who has been on the Grand Prix circuit for years, so his knowledge and contacts are second to none, and this is all too apparent throughout the book.

A useful new chapter for this third edition is one of application of F1 technology to the outside world. This follows an initiative at the Science Museum in London which held an exhibition in 2009 focusing on products that had evolved out of Formula 1and been taken up by other industries. This included a BabyPod to transport seriously ill babies to and from hospitals, knee braces that have been taken up by the US Marine Corps, and a bicycle that has an onboard computer and performance monitoring system and also incorporates GPS and a radio transmitter that weighs under 7kg.

If there is a slightly jarring note it is a chapter on “intellectual property rights” which specifically deals with the Spygate scandal of 2007. Personnel from the McLaren team were caught receiving highly confidential information from sources within Scuderia Ferrari. The result was an unprecedented $100 million fine for the British team and all its points being revoked in that year’s Constructors’ championship. While IPR is certainly worthy of mention in such a book, a blow-by-blow account of what happened does not really warrant a chapter to itself. Every team is after every other team’s secrets and will try to get them by fair means or foul. Sometimes it means poaching people from rival teams specifically for that purpose or it might mean going on a fishing expedition and approaching independent research centers being used by another F1 team. As Tremayne says in this chapter: “Dennis (the McLaren co-owner and team principal at the time) came to appreciate that there was no precedent for applying complex IP law from the real world to F1 design. If patent law were to be enforced in F1, it would most likely bring the sport to a grinding halt.”

For those unfamiliar with some of the jargon, such as “endplate” or “open loop” there is a useful glossary at the back of the book to help the reader. There is an Index but it is printed in tiny type.

(The reviewer is editor of Race Tech magazine, a monthly technology led motorsport engineering magazine; Moto Tech, a publication along similar lines on motorbikes; and Bernoulli, a very specialist magazine on racecar aerodynamics and vehicle handling.)

Peace was Their Profession—Strategic Air Command: A Tribute »
« Jaguar, All the Cars