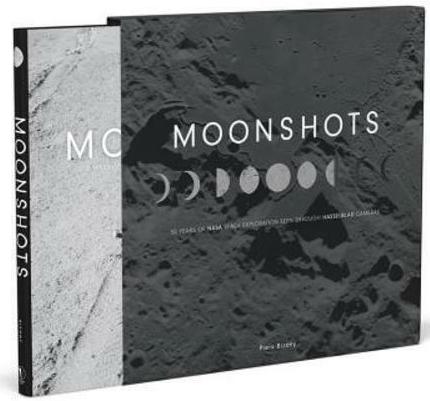 “Gray is a difficult thing to render in pictures built from cyan, magenta, yellow, and black inks. Furthermore, even the best color film stocks balked at registering colorless grays. Photographers working with film knew this very well and selected their stock for the well-known biases, some great for architecture and landscape, others suited to portraiture, and so on. There never was a strip of color film that produced an absolutely true color rendering of a scene (whatever ‘true’ means.”

There are plenty of images that inspire in this book but that’s not really what it’s about. While there is another, newer book by the same author (The NASA Archives, 60 Years in Space, for German art publisher Taschen) that would offer more obvious visual goodies, the reason for reviewing this one is that it offers some really meaningful fundamentals about the limits and the limitlessness of photography. 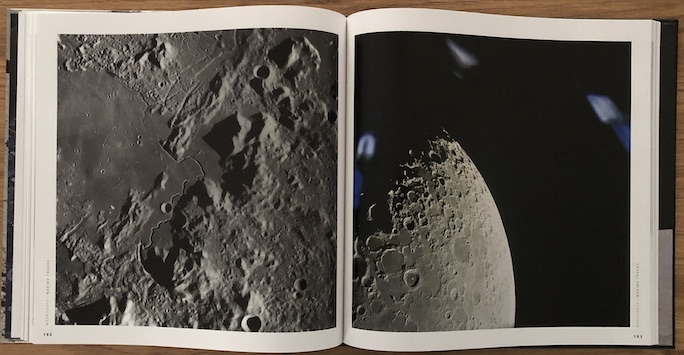 Let’s establish first that Bizony is an old hand when it comes to space themes and space photos. From print to film to other media, he has an affinity for the esthetic dimension of this topic. Likewise the historical dimension, but that comes into play in this book only insofar as it informs the pace and the scope of his exposition. The key to this book is, where else, in the Preface. This book is almost two years old at the time we review it (we delayed reviewing it so as to see the newer one at the same time) and, clearly, some wags who have held forth on certain issues did not bother to read or understand it. They carp that this book shows nothing new—Why??, they lament, NASA has tens of thousands of photos—or that—an even greater affront in their minds—the images they’ve seen before looked “different.” Sigh.

There is a reason Bizony begins this book by quoting fabled landscape photographer Ansel Adams to illuminate the deeper meaning of photography. It has limits: the technical parameters at the moment of capture, and the hardware; and it is limitless: every new exposure of the negative can, and should, be a new interpretation. Adams himself made multiple “interpretations” of his own negatives by varying the movable parts during the development process—time, chemicals, paper, etc.—to create a different mood/impact based on a different tonal range: “The negative is comparable to the composer’s score, and the point to its performance. Each performance differs in subtle ways.” In the practical world of bookmaking you’d have to add the printing process itself to the list of variables, and the different, fast-drying inks, even, on some level, atmospheric conditions.

That you’ve seen a printed photo look different elsewhere…is neither here nor there and not at all the point. As Bizony writes, “in that same spirit, NASA did a great job creating initial ‘performances’ from their original film frames. Then it was up to the countless magazines, books, and other …” 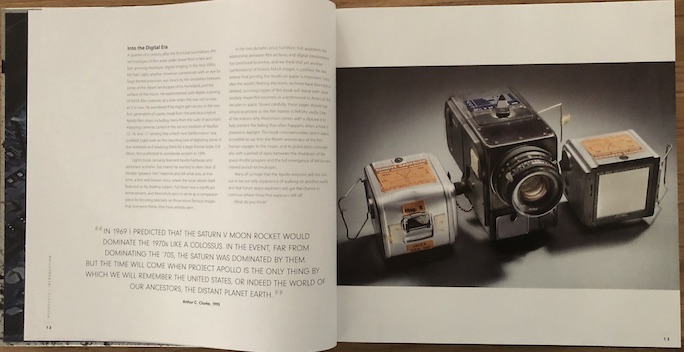 The key take-away here is whether the person doing the performance had anything to say with his interpretation. That UK-based author, filmmaker, and media producer Bizony has is pretty much undeniable. You’d have to live under a rock not to know of his work about digital special effects with director James Cameron, the “Space 50” project with the Smithsonian, or his biographical (cf. Starman), political (cf. The Man Who Ran the Moon), and forward-looking (cf. The Rivers of Mars) thought pieces.

Long story short: enjoy this book for what it is! 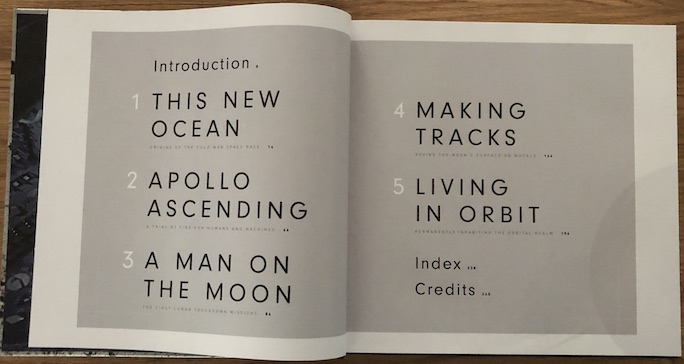 As the subtitle makes clear, the book looks at 50 years of space work, meaning it goes well beyond Apollo 15 when the more portable Nikon cameras entered service. Nikon is not even referenced in the Index (nor in the main text) so the whole “Hasselblad-only” angle seems a bit tedious. That said, Bizony makes it a point to say that this is not a Hasselblad-affiliated book but that the company showed “goodwill towards the project.” The Index will be your main guide to what is in the book because the Table of Contents is really quite unspecific. And speaking of Index, we notice with dismay that it butchers the name of Wernher von Braun…never a good sign, although Bizony, who surely would not have been the indexer, gets it right in the text. 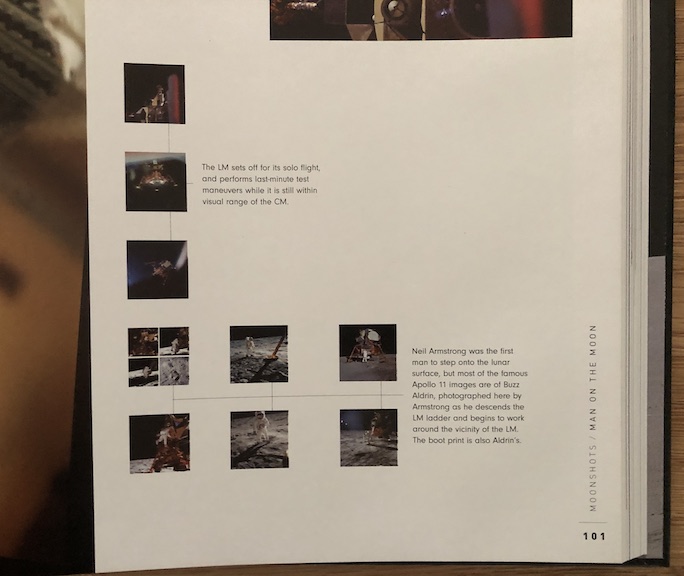 There is one other thing that catches the eye—and looks problematic until you ask yourself what options an author has if he wants to minimize clutter on the page: the photos are mostly not individually captioned but instead each “section” has near its beginning a series of thumbnails that have captions, usually quite thorough ones, and sometimes several thumbnails have one caption for all (see above; such as images shot in sequence or the like). A valid choice but it does mean a lot of paging back and forth to get photo info. As there are no running heads/subheads it’s too easy to lose track of what mission/program you’re looking at so again there is potential for a lot of paging back and forth to get your bearings. 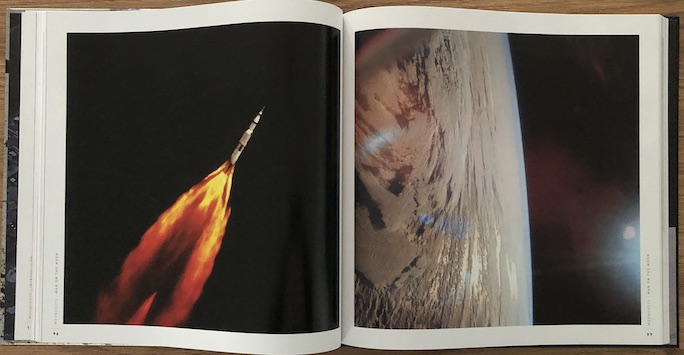 The book begins with JFK’s famous 1962 speech, makes a case for human rather than machine-based space exploration, covers all US programs in linear order, and ends with the ISS. Incidentally, not all images are photos: there’s also some fine art and the occasional map. 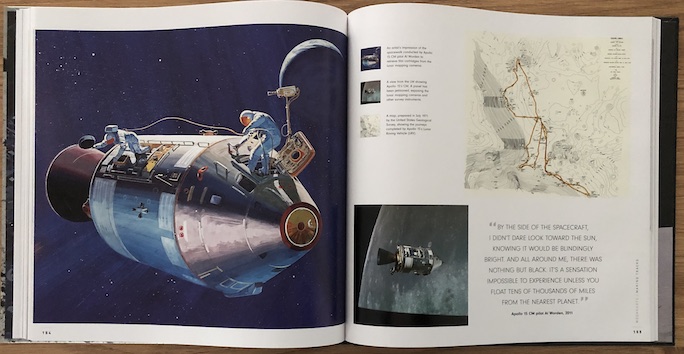 We end with another useful comment of Bizony’s: “[Michael Light’s book] Full Moon was a significant achievement, and Moonshots aims to serve as a companion piece by focusing precisely on those famous images that everyone thinks they have already seen.” 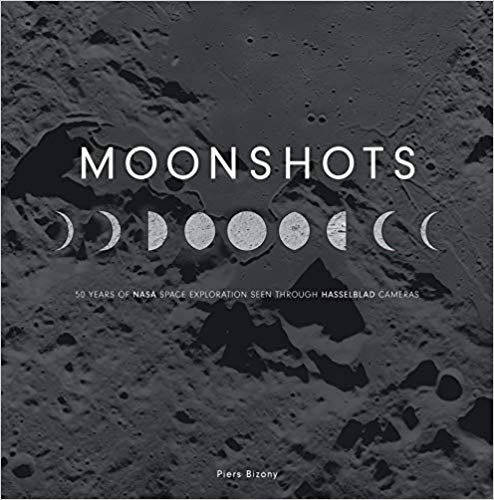 Lastly, why does this book have a slipcase (and a pretty fancy one at that!)? It’s not for decoration but lets Bizony make yet another point (p. 12).