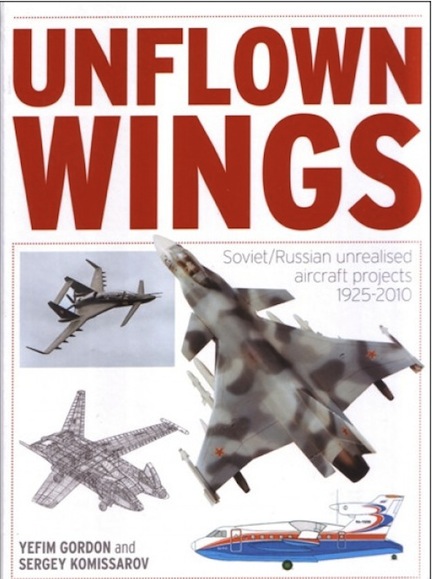 “It should be noted at once that, despite the large volume of the publication, it cannot encompass everything, and information on many well-known and lesser-known projects had to be left out; as the saying goes, you cannot fit a quart into a pint pot.”

That “pint” pot is a stout 640 pages and crammed so full of exotic flying apparatus that one can only wonder how much more can possibly be out there? If anyone knows, it’d be authors Gordon and Komissarov who have come to pretty much own the topic of Soviet/Russian aviation in all its guises. In fact, avid readers of their material will recognize the odd illustration that may have appeared in other books before, but largely the material here will be new to Western eyes. (That said, if you just quickly skimmed through the book without reading anything, there are going to be moments when your mind will be tempted to supply aircraft names/designations for shapes you are familiar with—except that they are look-alike Russian versions of Western aircraft.)

You’ve seen Russian supersonic seaplane bombers, compound helicopters, 8- and 12-engined super-heavy lift aircraft—all plenty, ah, unusual. But can you picture an air train? (A tug towing up to seven gliders.) How about a 1934 Ford with detachable wings that can land behind enemy lines, ditch the wings, and play innocent tourist? A horizontal triplane, or a joined wing? It’s all here.

On the back cover someone called the book “an absorbing look.” That’s an understatement. And the brevity alluded to above will only lead to more absorption of other, related literature, not least to pursue certain trails that here are only hinted at in passing. Examples: the “special prison” near Moscow for defense technology specialists where a number of the projects discussed here were hatched; or, speaking of which, the question of whether the technology to pressurize the cabin of the 1936 ANT-53 airliner that could be mistaken for a Boeing B 307 Stratoliner really was available before designer Tupolev was shipped off to prison in 1937; or the 1943 stirrings to create nuclear weapons.

This book is a mixture of encyclopedia and catalog. Nine individual chapters present the major design offices in order of importance: Tupolev, Polikarpov, Il’yushin, Mikoyan, Sukhoi, Yakovlev, Myasishchev, Antonov, Beriyev. Projects are reviewed in chronological but not seamless order, with entries ranging from a few lines in length to multiple paragraphs. Hundreds of photos and drawings (artist’s impressions, 3-views, cutaways etc.) illustrate the text. As many of these craft remained unbuilt, many photos show mock-ups or models. These are working models (cf. wind tunnel) or display/desktop models—and they will make collectors swoon. Modellers would have to be pretty adept at distilling vital details from photos to build their own, especially since most of these models (some made out of wood) are devoid of micro detail and really only serve to give overall shapes and proportions. Likewise, almost none of the drawings show dimensions and not all descriptions even include such data points.

Chapter 10 covers “various design bureaux and individuals” and makes up a good third of the book. Here is where you find much of the way-way-out stuff. IF you can find it . . . The book doesn’t have an Index and subject matter experts will argue that the way it is organized it doesn’t need one. But ch. 10 in particular is challenging because entries are sometimes by designer, sometimes by their client/employer. One cannot fault the authors for resigning themselves to saying “it was rather difficult to maintain a uniform approach to this matter” but the non-specialist reader who wants to do more than random perusing, to which a book such as this is ideally suited, will struggle. Say you knew there are aircraft that have “BIC” in the model name; you’ll only find them—under “C”—if you know that this prefix stands for Boris I. Cheranovsky, and if you don’t confuse him with, say, Chetverikov. And how could you know that Chetverikov makes a T-2 but for a T-6 you’d need to look under Bartini? In lieu of an index, cross-referencing (“see also”) might have helped and certainly would have made more general entries findable (cf. “Rolls-Royce” to point you to the first use of their Nene engine in a Russian craft). It doesn’t help that heads for main and sub entries in ch. 10 are done in the same font (nor are there running heads) so you’ll be wearing out those 160 pages pretty quick. Nothing is simple . . .

No matter, this is a marvelous book and, if you think about the sheer bulk, absurdly cheap. Nice paper and printing, too.