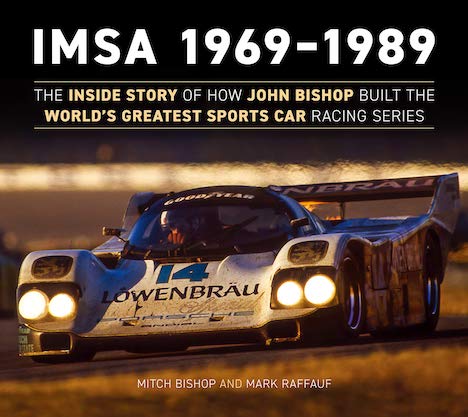 “IMSA was founded on a simple guiding principle: Anyone, even the ‘little guy,’ could prepare a race car, show up to race, be competitive, have fun, and make some money along the way.”

But, in a world in which people cannot agree on the right way to make toast, nothing is.

John Bishop would have known that because the whole reason he was taking on that new job of shaping and administering a new racing series was that his old job, as Executive Director of the SCCA, had become bogged down by politics and in-fighting.

If you follow American motorsports (as distinct from motorsports in America) and are fluent in that alphabet soup of acronyms—SCCA, NASCAR, ACCUS, WSC, FIA, USRRC, USAC, Can-Am, Trans-Am, GTP, FISA, PSCR, ALMS etc. pp.—you already know enough to have an opinion about IMSA, the subject of this book. Pro or con, put that aside.

This is too good a book—thoughtful, measured, thorough—to be shortchanged by preconceived notions. Yes, the author is the IMSA founder’s son and the coauthor a decades-long IMSA insider, and both are keenly aware of the pitfalls of bias, but they also know that they and only they, exactly because of their backgrounds, can blow the cobwebs off a story that has become muddled by tribalism. Don’t believe it? Open the front or the back cover and find right on the endpapers dozens of quotes from mostly racers and team owners that say that IMSA was the right answer to the right question. And if you don’t already have an opinion about any of this, hooray; you’re coming at it without baggage.

Photos range from the relatively mundane (above) to, well, art.

Before even getting into the book let’s establish that both Bishop (active in the software field and also on the leadership council for the International Motor Racing Research Center in Watkins Glen) and Raffauf (former IMSA president and now Senior Director of Racing Operations) are first-time authors. One can only marvel at how well-written the text is—clarity of thought, the architecture of the prose, and the pace at which the topic is encircled. Obviously this is not the first rodeo for publisher Octane Press and from editing to typesetting to proofreading, everything is simply a joy to behold. And a follow-up book is in the works!

Almost 400 pages are a substantial arena in which to pin down 20 years of motorsports that began with the momentous development, in the 1950s, of augmenting, and ultimately supplanting, amateur-level racing with a professional tier. Among the book’s many strengths is that in following the grand sweep of history it also introduces points that, while peripheral to the core topic, offer critical background. Example: already in the Preface Mitch Bishop notes that his father’s generation’s shared experience of having being “forged in the crucible of the Great Depression” and then partaken in “a global battle between good and evil” (i.e. World War II) shaped their outlook on life—and, on a more practical note, that the GI Bill was essential in building up the very middle class without which racing would have been a pointless frivolity. More importantly, he circles back to the war experience later in the text, writing that his father early on discovered that by appealing to this common denominator he could de-escalate tense disagreements, so much so that he considered it an “important negotiating tactic that he employed many times.” This has nothing to do directly with IMSA history but it is an important reminder of what makes people tick.

You may know everything about IMSA racing but did you know Bishop majored in industrial design and that it was his artwork (left page, one of many magazine covers), while still in college, that brought him to the attention of the SCCA? Or that as a designer at Martin Aircraft he worked on this prototype seaplane jet?

Airplanes remained on Bishop’s brain his entire life—he retired to a fly-in airplane community and built his own plane. More importantly, switching to airplane talk diffused many a dicy argument at IMSA.

The exposition begins with Bishop family history (an early ancestor was hanged during the Salem Witch Trials!). Nothing in young master John’s childhood (1926–2014) points to a career in motorsports but aviation and an ability to draw emerge as fundamental interests, and both will cause his path to intersect with the folks who run the SCCA and will hire him to write their technical and competition rules, leading him into the trenches of “all-out war between the SCCA and USAC over control of professional road racing.” Here too the authors show commendable skill in explaining in simple to follow language the byzantine differences in racing series/formats—who may race against whom, where and how often, and for how big a purse etc.—at both the national and also international level.

Two examples of Bishop’s notes. You won’t find that in another IMSA book! Work on this book began back in 2009 when Bishop was still alive but was not pursued with any urgency at the time until after he died in 2014. Coauthor Mark Raffauf was involved with both projects.

The following eleven chapters take us in chronological order to the end of the Bishop era. Much nastiness would ensue, with multiple changes of ownership, before IMSA settled down again. Today it is a division of NASCAR, which is why the Foreword is by James France whose father Bill  had got the ball rolling with Bill Bishop (and, one should really say “and Bill’s wife Peggy” because she wasn’t just one of the three original IMSA employees but remained an active and influential force).

Hundreds of well-chosen photos augment the text, sidebars add relevant detail—but, an important caveat the authors stipulate early on: “If you’re looking for race results and technical specifications of the era, this is not the book for you—those have been covered in other works.” The Appendix contains charts of IMSA classes/series, lists of champions, and source material/references; and there is a fine Index.

The book won a well deserved Bronze medal at the Independent Publisher Book Award in 2020.