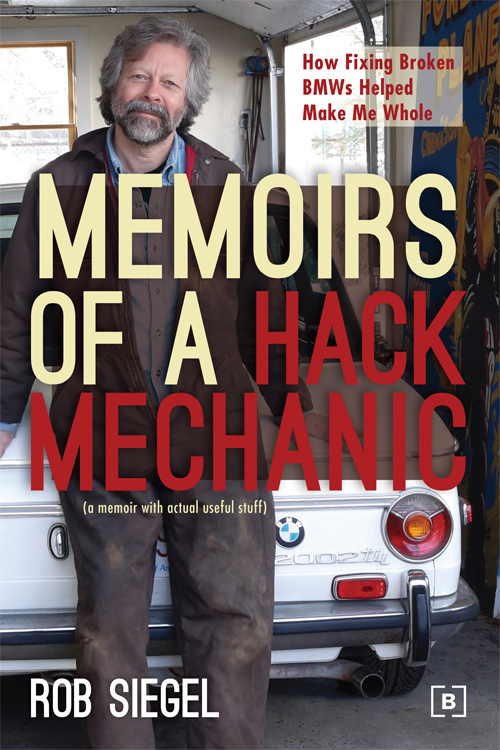 “It is heartfelt; it is quirky; and it is mine – a memoir with actual useful stuff. Who else is going to tell you car stories, give you parenting tips, and tell you how to burn out a snapped-off stud with an oxyacetylene torch?”

Regular readers of Roundel, the publication of the BMW Car Club of America, will need no introduction to the author of this book. For the rest of us, Rob Siegel might need a bit of explaining. Siegel is, among other things, a musician, a geophysicist whose vocation is locating UXB (unexploded bombs or ordnance), husband, father, and certified car nut. It is the latter sterling quality that should lead readers to this book.

Before I go any further, Siegel lives in Newton, Massachusetts, which is but the proverbial stone’s throw from Cambridge—Our Fair City, Massachusetts, abode of Click and Clack, the Tappet Brothers, otherwise known as Tom and Ray Magliozzi, of Car Talk. A question crossed my mind for which there seems to be no easy answer: what is it about that area that creates such people? Tom, Ray, and Rob all seem cut from the same cloth, which is a rather scary proposition in some ways. . . .

Rob Siegel writes observations on the Life Automotive that are centered on both his personal quest towards Wholeness by fixing broken BMWs, telling the world (at least those readers of Roundel) about his journey towards this goal, tossing in what he accurately calls “actual useful stuff” along the way, and comes across as the sort of person who you pray will sit at your table at a dinner because you KNOW you will have a good time. Yes, he is funny in the way that those who never quite grasp the notion that life is supposed to be an A to Z proposition are, and, therefore, approach life on their own terms. Siegel is also possessed of a sense of humor tinged with a huge dose of passion for life in general, family and friends, and boxy BMWs.

Siegel is fortunate in that his wife, Maire Anne, is a zoologist who keeps bugs (Insects Of Unusual Size) in a room in their house, which makes Siegel having a lift in the garage perfectly normal. Along with owning about seven or so vehicles at any given time. Oh, it should be mentioned that Siegel rebuilt the engine of Maire Anne’s VW bus in the kitchen of their house. Certainly a match made in heaven.

Among the useful information that Siegel provides are suggestions for what tools to have in your toolbox, guidance as to how to deal with various vehicle maladies or quirks, cars to consider or avoid, and tricks that work which would never cross your mind. Piled on top of all that is voice of experience that can only come from years of dealing with making vehicles whole again. As Siegel often suggests, do as he says not as he did in some cases: and, he tells you why.

Memoirs of a Hack Mechanic is a witty, informative, funny, and delightful read. It is good to know if you are a car nut that you are not alone. With Rob Siegel, you are in good company.

Note: The book will go on sale June 3. Pre-orders placed directly with the publisher before then are available at a reduced price of $24.95 and will be autographed.

Chrysler: The Life and Times of an American Automotive Genius »
« Stretching It: The Story of the Limousine