The Man and the Team That Turned Formula 1 Upside-Down 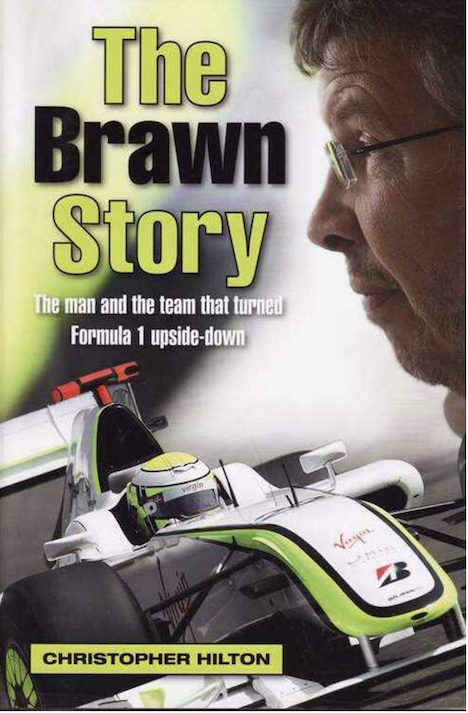 The Brawn Story is Christopher Hilton’s book about the 2009 Formula 1 season, when Ross Brawn’s eponymous team seemingly came out of nowhere to upset the Formula 1 establishment by winning both the constructors’ and drivers’ championships. Given that the book was published by Haynes in December of 2009 Hilton must have spent the year writing as the drama unfolded.

Fortunately, there is far more to this story than a race by race, blow by blow description of the year’s events. The author reveals the fascinating, talented character that is Ross James Brawn (b. 1954), covering Brawn’s history prior to motorsport then starting as a machinist with the Williams Grand Prix team. Brawn never returned to Civil Engineering, spending time in sports car teams before the golden years in F1 with Benetton and then Ferrari and Michael Schumacher.

Hilton builds the story from Brawn joining the Honda racing team in late 2007 with a three-year plan for Formula 1 success. He has titled Chapter 1 The Perfect Storm, explaining the shock of the sub-prime credit crunch that led to the demise of Honda’s F1 program and, from the ashes, the rise of the Brawn team. This makes for compelling reading with Hilton capturing the intense political and commercial drama of trying to not just keep a Formula 1 team on the grid in 2009, but trying to save the jobs of seven hundred people in the factory at Brackley in Northamptonshire, England, all while under the pressure of an almost impossible timeframe, with a mere few weeks to go before the start of the 2009 season.

The book of necessity records the season race by race, but the author cleverly keeps the story interesting by including the parallel stories of the fight for the drivers’ championship between the Brawn drivers Jenson Button and Rubens Barrichello and their external rivals Vettel, Webber, and Hamilton. In a season that had its highs and lows for the Brawn team, the author details Brawn’s tactical abilities along with his driver management skills that helped the team to its unprecedented success.

Further interest is added because of the many interesting characters that form part of this story, people like designer Rory Byrne, Neil Oatley, Nick Fry, Eddie Jordan, and Bernie Ecclestone. The author makes excellent use of quotes from many people that provide a range of views on an issue or a person.

Fourteen pages of color photos are bundled into the middle of the volume. There is an excellent Index as well as Notes at the end of each chapter and a collation of the raw statistics of the season.

The Brawn Story is well structured and well written. It provides a compelling read about the year that the Brawn Team turned F1 on its head and won the championship. It also provides an insight into the fascinating and talented man, Ross Brawn.

Posted Under: Racing, Rally | Author: Peter Hill | No comments yet