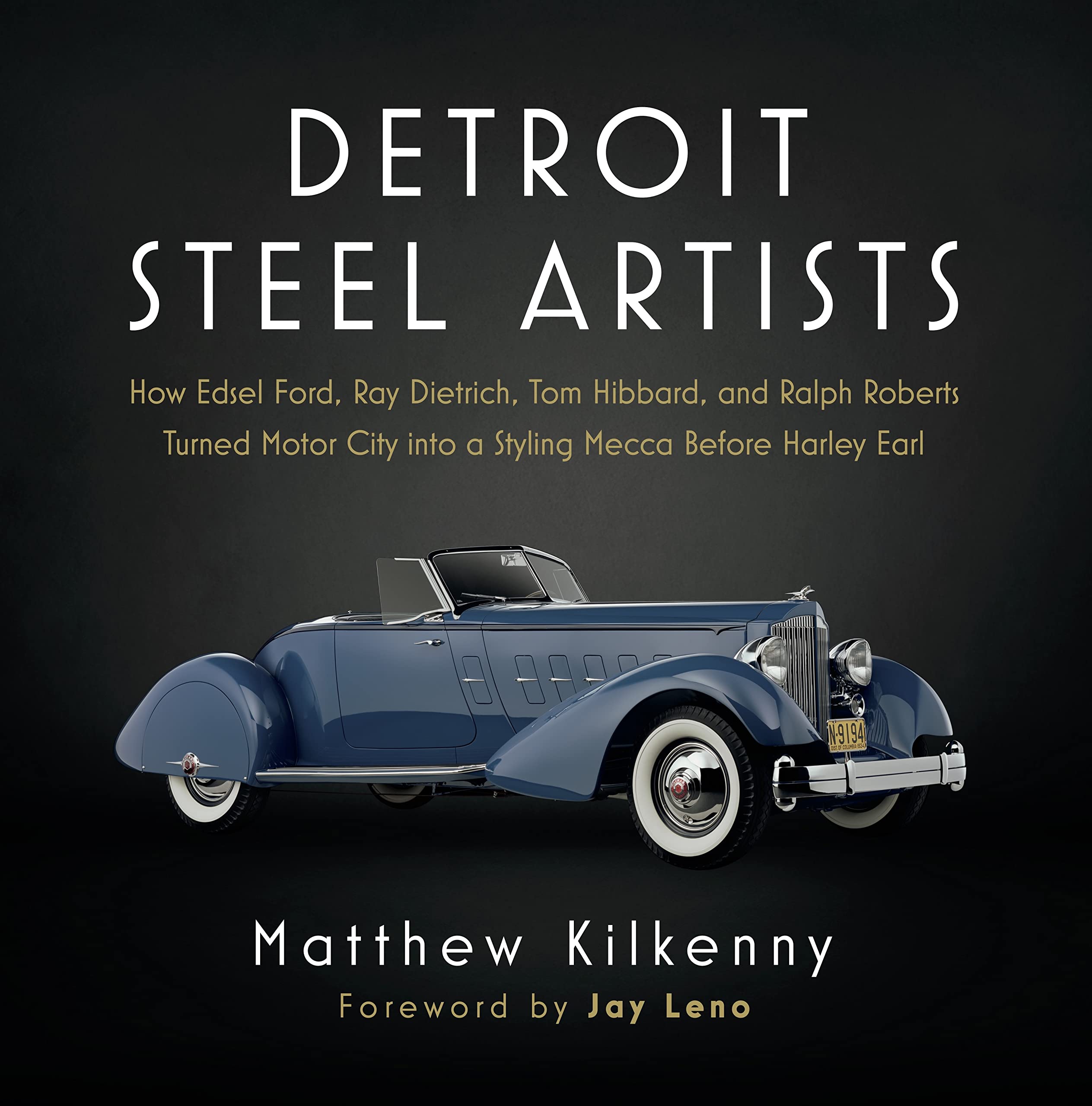 Can a book have magnetic powers? This one certainly seems to—at least for your commentator and a fellow appreciator of vintage transportation and their history who was here when this book arrived. The first sight of Detroit Steel Artists was Scott Williamson’s image of the Le Baron-bodied 1934 Packard 1106 Runabout floating on the front cover, then Michael Furman’s image of the Dietrich-bodied ’32 Lincoln KB Stationary Coupe on the back. Nothing could keep us from exploring—page by page—the entire book on the spot.

All who author Matthew Kilkenny names in the subtitle—Edsel Ford, Ray Dietrich, Tom Hibbard, and Ralph Roberts—he writes of but the most words/more pages are devoted to Raymond Dietrich. Of a certainty there’s plenty to read about Tom Hibbard and Howard “Dutch” Darrin especially once he and Hibbard formed Hibbard & Darrin in Paris but, quite simply, as Kilkenny observes Dietrich designed a greater number of these Classic custom and semi-custom cars than any other. Then too, Ray’s habit of retaining materials and records that subsequently have found their way into museum custodianship contributes to a richness of material existing today as Kilkenny’s bibliography and chapter end notes indicate.

In a book extolling the specialness of the era and the Grand Classics that resulted, Ralph Roberts of LeBaron, Carrossiers (first an LLC before it incorporated) one of its three owners along with Ray Dietrich and Tom Hibbard, quoted decades later observation is all the more ironic: “We built some really nice cars back then, but it’s kind of odd to look back on the Classic Era now, because at the time,. . . we never considered them anything special. History has made them very glamorous . . . Coachbuilding was never a fine art, but it was an applied art, a commercial art.”

Ray Dietrich was indeed a prolific master of the art. But there’s more to the story than the cars as Jay Leno alludes in his Foreword. That this book’s approach shares the heretofor behind the scene business machinations of the companies, makes it the more interesting and historically significant. So convoluted are some of the who owned what when that there’s potential to leave a reader perplexed if not for a wonderful two-page graphic (shown immediately below) that helps the reader keep track of what the words are conveying. 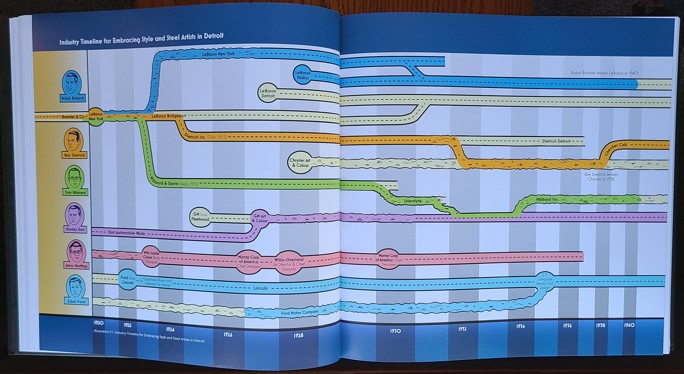 Most hearing the name of coachbuilder Le Baron think of it as one company but that wasn’t the reality. When the third iteration of Le Baron was formed it was as Le Baron, Incorporated in the state of Connecticut with the incorporating directors and owners Dietrich and Roberts plus Clarence Seward and James Hinman of the Bridgeport Body (constructing) Company. It’s at this point that Kilkenny publishes his research results that refute what had commonly been believed and which Dietrich himself had called a merger of his and Roberts’ LeBaron Carrossiers LLC with Seward and Hinman’s Bridgeport Body. 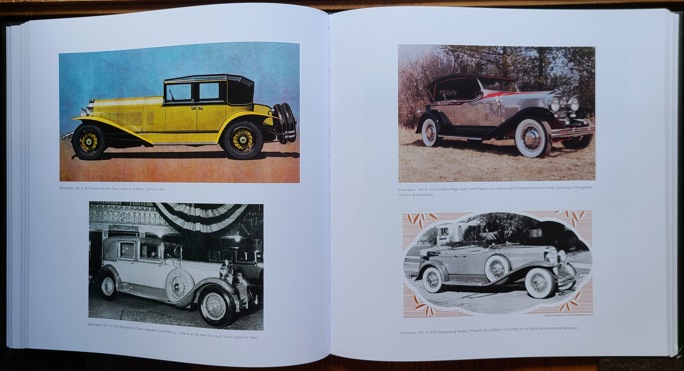 Citing his sources and reproducing some original documents, Kilkenny writes, “The [new] company’s ownership was as follows: Seward owned 100 shares, Hinman owned 100 shares, Dietrich owned 35 shares, Roberts owned 35 shares, and Le Baron New York owned 130 shares. This ownership ensured that neither New York nor the Bridgeport Le Baron members had a controlling interest, and the new venture was an equal partnership . . . The present writer has discovered no records that show that Le Baron Bridgeport owned any part of Le Baron, New York.” Further, Kilkenny notes that “the Le Baron Bridgeport incorporation papers show that all shares in the new company were acquired through property transfers (and sweat equity), and no cash was put into the venture by any of the shareholders.”

A similar reality evolved with the next company Ray established. Early 1925 he moved to Detroit and set up shop incorporating as Dietrich Inc. Like Le Baron before it, Dietrich Inc went through several ownership and name alterations. Kilkenny’s narrative carefully explains and documents those various entanglements with coachbuilding company Bridgeport, then Murray correcting previous assumptions and beliefs. Eventually Ray Dietrich left this firm. But throughout all the business turmoil he’d continuously been designing and building cars. 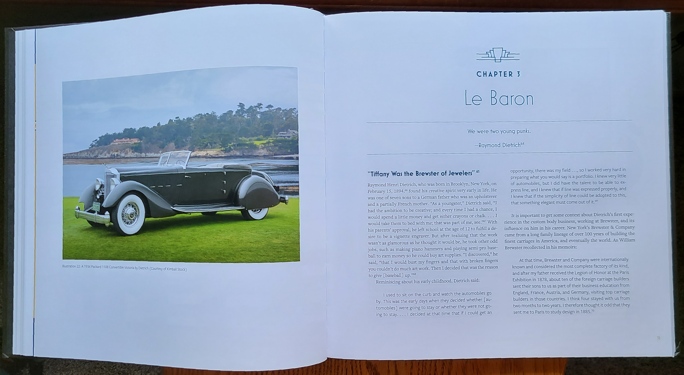 The 1934 Packard 1108 Convertible Victoria designed and built by Dietrich not long before he was hired by Chrysler to “build out [its] first legitimate design studio.” The facing page shows the elegant design of the book’s pages. Note the little Art Deco squib that appears on each chapter’s opening page.

The stock market’s drastic plummet and ensuing Depression taking place essentially on the doorstep of the conflicts of World War II marked the end of the era of the Grand Classics—but not, by any means, Ray Dietrich’s career for Dietrich remained engaged and productive until finally laid to rest in 1980 in his 86th year as Matthew Kilkenny relates on the closing pages of Detroit Steel Artists.

It’s a grand, important book and well-done in every respect telling of the grand cars and the men who created them.

Posted Under: Art, Artists and Design, Automobiles, US | Author: Helen Hutchings | No comments yet