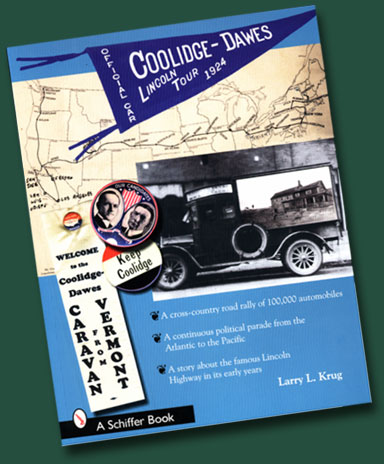 “As the caravan approached towns, be it morning, afternoon, or night, there was a festive atmosphere. Horns honked; there were police escorts and school marching bands, local political groups, pennants, and flags.”

Author Krug has worn too many hats in the communications and antiques professions to meaningfully list here but suffice it to say, these skills and interests combine here ideally to compile a documentary based on first-hand accounts by participants and contemporary news sources.

That participant is one E.A. Seidel who drove the lead vehicle and rolling stage, an REO Speedwagon, on the entire 56-day trip and kept a daily log. Inconsistencies (and misspellings) between his reports and the newspaper coverage have been left unreconciled here so as “convey the flavor” of the report. This is fine because the purpose of this book is not an academic treatment of presidential history but a portrayal of Americana in action. Neither the presidential candidate, Republican Calvin Coolidge, nor his running mate Charles Dawes actually participated on the tour anyway (common practice in those days) but the reasons for this monumental campaign effort represent an interesting chapter in US political history because Coolidge, the sitting president, was not widely known in the land due to the circumstances under which he had ascended to the presidency. (Time to get out those history books if this is all news to you!) “Silent Cal” had to get out the vote if he wanted to be elected properly in his own right.

Back then, it wasn’t just Democrats and Republicans. Progressives, lead by Wisconsin senator Robert LaFollette, were the force Coolidge’s party worried about more than the Democrats who suffered internal strife over the role of the Ku Klux Klan. Even readers who are not Americans will find this aspect illuminating in terms of the country’s efforts to come to better terms with race and equality.

Starting in Coolidge’s hometown of Plymouth, Vermont, the caravan largely followed the Lincoln Highway that begins in Times Square in New York City, making spontaneous detours into the countryside along the way and up and down the Western coast. The book covers each day at a time, beginning with Seidel’s entry (day’s itinerary, synopsis of events) and augmenting or juxtaposing it with accounts from newspaper reporters which offer a vast amount of context and overall local and national political commentary. Sunday coverage is most often a mere one-liner by Seidel. How the times have changed! Sidebars, by Krug, often extensive, add further background.

From campaign banners to photos of the cars, from the trivial to the sublime, there’s a bit of everything in this most interesting account that brings to life a moment in history that seems to have slipped into oblivion.

The Automobile: A Century of Progress »
« Badges & Uniforms of the Royal Air Force