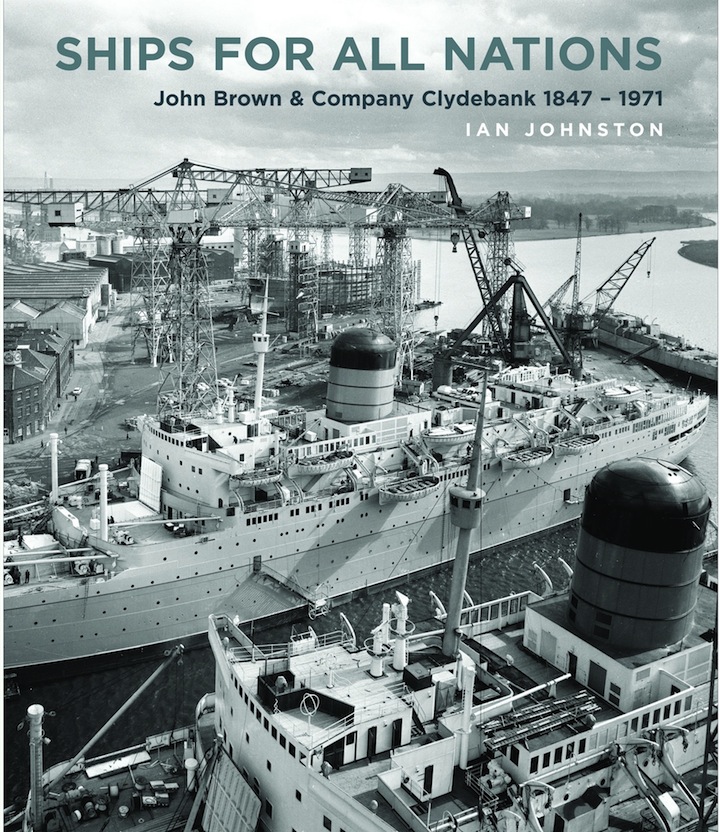 “To this sense of purpose was added the scale and drama of both the ships and the shipyard environment. Ships were punched, bent and forced into existence out of a reluctant material. The shipyard was the scene of an all-weather elemental confrontation between man and steel.”

The colorful language of this quote notwithstanding, Johnston is keenly mindful of the false romanticism that tends to attach itself to epic endeavors. Yes, the Eiffel tower and the space program and the building of capital ships are matters of national prestige and personal pride; they require the “right stuff,” and those who have it know they do and comport themselves accordingly. But, before that ship gets launched and that ribbon gets cut, there are the matters of money and resources and infrastructure and paperwork and unforeseen consequences to be considered. Nothing, for instance, about Glasgow and the River Clyde turning into the epicenter of marine engineering and iron shipbuilding was inevitable. If it had, that part of industrial history would have started there sooner.

With a sure hand, Johnston’s most excellent 3-page Introduction offers a Big Picture survey of the dawn of steam spawning the transition from wood to iron as shipbuilding material, the growth spurts of an industry, and the follies but also inevitability of becoming dependent on it, both at the individual (job security, workplace safety etc.) and the collective level (subsidies, consolidation, international rivalries etc.)

As Sir John Brown so rightly writes in the Foreword, “Clydebank-built” is a badge of honor, in very large part thanks to the firm whose name he shares (although no relation) to which he devoted half a century of his working life. Rising from apprentice to technical director (naval architect) and finally managing director does allow him a uniquely well-rounded perspective.

Among the hundreds of ships built at the Clydebank yard are some of the most famous vessels in maritime history: transatlantic liners like Lusitania, Mauritania, Queen Mary, and Queen Elizabeth 1 and 2, and storied warships like HM vessels Hood, Duke of York and Vanguard, and notable ships for other countries. The latter is probably the reason why this edition of a book first published in 2000 changed one word from its original title: Ships for a Nation, ISBN 978-0953773602. The book also lists auxiliary yards and non-ship items such as rigs, engines, boilers and other components.

Commissioned in 1994 by the District Council of the town of Clydebank (which took its name from the shipyard) the book is very thorough, but it is part of a trilogy and must be appreciated in that context. There’d be no point in duplicating material covered in the companion books A Shipyard at War and Clydebank Battlecruisers just to keep hasty readers from carping about whatever it is they think is missing from this volume.

The 2015 edition differs from the 2000 one in only small ways, mainly related to bringing the history forward to the cessation of operations in 2001 and adding more photos. Johnston, a Glaswegian himself, grew up in a shipbuilding family and his lifelong interest in the industry gives all his books depth and relevance.

For illustrative material the book draws heavily on the output of John Brown’s in-house photography department that amassed tens of thousands of negatives since the 1880s capturing every aspect of work at the yard. That some of the photos are staged, such as a girl bringing her father lunch (p. 159), only shows that the photographers realized that such a scene  was a legitimate part of “one of the greatest stories in Britain.” So, whether your interests lie in industrial or social history the amount of detail in these photos invites unhurried study.

If the book contained only the ca. 400 well-captioned photos, it would be a winner. Add the authoritative text, not to mention the other two books in this trilogy and you have a grand, far-ranging reference-level treatment of all the things large and small at this singularly important shipmaker. Even readers with only automobile leanings would find a good deal that is of crossover-interest here in terms of industrialization, technology, and people (e.g. the Napier family).

Almost a third of the book consists of 11 Appendices ranging from bios to Profit and Loss statements to a complete (to the extent such a thing is possible) Ship List. Chapter Notes appear in bulk at the end (which necessitates a lot of page shuffling but thankfully the book’s properly rounded spine can take such stresses), followed by a proper Bibliography and a meticulously done Index.

Considering that there remain thousands of unpublished images in the Clydebank Colletion, this is surely, hopefully not Johnston’s last book.