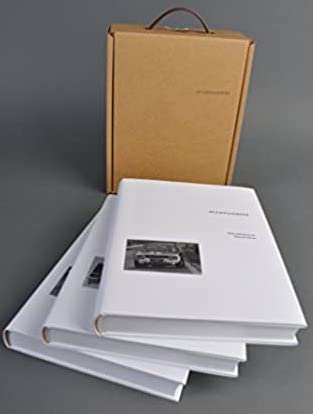 “Many Alfa Romeo models, at a certain point in their career, turned into something more than common…The Giulia GTA on the contrary, transcended the mythical status to become a legend. Its victories were immortal, its strength illustrious.”

The fellow who said that would know. He is the ex-Alfa Romeo racing car and engine designer who had taken Ferrari to an F1 championship but left in “the great walkout” of 1961 to launch ATS, then co-founded Autodelta which would become Alfa’s official sports division.

First impressions: what could this book possibly be about??

Not having a subtitle doesn’t help. Is this book even trying to shine a light on itself? Is it only for the initiated, the insiders, the geeks, the code-breakers? Even if you recognize the title as Italian, and possibly even know what it means (“lightened”), would you have been able to deduce that this book is about the Alfa Romeo GTA? You know what the “GT” stands for, but did you know the “A” comes from alleggerita?

This book is also about the GTAJ and the GTAm and, at least peripherally, about the Giulia TZ and TI and TI Super and the Sprint GT. In other words, everything GTA. Well, the GTA of old—Alfa Romeo has just announced a 2021 version of the GTA and GTAm (m as in modified, as in extra-extra quick). So, whether you have an old GTA or an eye on the new one, this book will be a useful compendium. 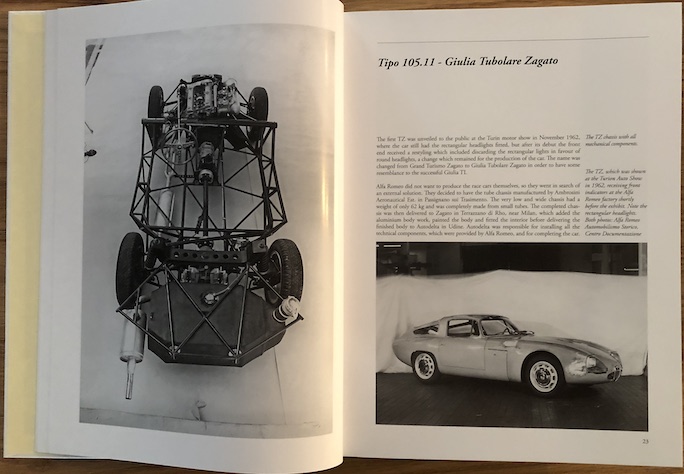 Well, it can be, if you work for it. There is no Table of Contents, no Index, no easy path to find anything a first time, let alone a second time. All the foregoing reminds this reviewer why we passed this book over when it first came out, in 2012. Moreover, it was so esoteric that it was surely destined to be a one-off—what market could there possibly be for a second act? Surprise, surprise. In 2017/18 author Patrick Dasse put out a series of currently six related books all about the Giulietta Sprint’s successor, the Tipo 105. (Strictly speaking there’s a 7th book, about the Tipo 33.) Now, these books go about their business entirely different than Alleggerita, but they are outliers just the same in the sense that they don’t seem to be troubled in the remotest way by the sorts of factors a publisher normally weighs. Dasse, as we elaborated elsewhere, runs his own publishing house so the only person he has to armwrestle is his bank manager.

None of the foregoing should diminish your interest in this book, quite the contrary! If you do start looking for it, be aware of: 1, this set is also available in a German edition (ISBN 978-3871660665) of 1500 numbered sets; the English edition runs to 3000. 2; there is a book by the same title but 20 years older (ISBN 978-9080119710)—that is the book this 3-volume set we are reviewing here is derived from. 3, there is a new series of books with the same title (also designed to match this set), also published by Dasse; it currently includes Alleggerita Herbert Schultze and Alleggerita Stahlberg-Racing. The difficulties sorting things out do not end here… 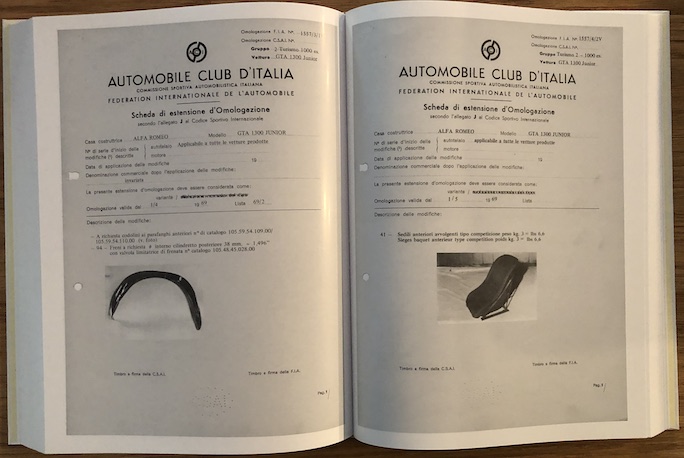 Reproductions of the actual homologation paperwork. Unabbreviated. For all models.

The original version of this book is so different from this 2nd that there is no point talking about it except to record its particulars: published in 1994 by Corsa Research in Belgium, 408 pages, 2500 numbered copies, hard to find today and expensive if you do. It was written by its proprietor (and bestselling historical novelist!) Tony Adriaensens, who is also listed as an author on this set, to which he wrote the Foreword—and explains that he really has nothing to do with the new book. He does relate the backstory to how Dasse approached him about acquiring his archive but neither he nor anyone else here explains why Dasse was interested in the first place. That little story would probably go a long way towards explaining how research into just one particular GTA turned into researching all, and one book mushroomed into a set of three, which in time would yield the most recent crop of seven and span the entire 105 Series.

To flog an earlier point once more: for a book that has a Preface, an Introduction and a Prologue, it nowhere makes any declaration as to what it’s about, who the people behind it are, or how it will go about its business. GTA-ers may not need such enticements but the fact that almost a decade after publication the publisher still has unsold stock probably means a good number of prospects don’t even realize what they have here, and the 350 Euro price doesn’t exactly invite experimentation!

The set consists of three volumes of similar size; they are not numbered but logic would suggest that “Alleggerita” = vol. 1, “Technical Documentation” = vol. 2, and “Register” = vol. 3. Vol. 1 is the cornerstone, containing the bulk of the narrative exposition, and vols. 2 and 3 present ancillary material. Much of the material was in some form already in Adriaensens’ original Alleggerita, but Dasse et al have cast a much wider net. 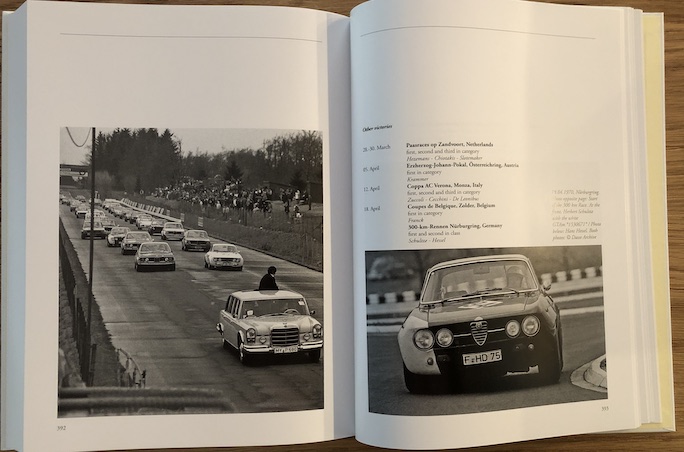 Too good not to show here: a Mercedes 600 pace car!

Vol. 1 explains the role of Autodelta, introduces the sexy Giulia TZ (105.11), highlights the emergence and then popularity of touring car racing in Europe and the subsequent organization of the sport in the form of governing bodies and rules, and dates the switch from amateur to pro-racing to 1965—with Alfa Romeo entering works teams running the GTA, the protagonist of this book.

Before turning to an examination of every—every!—aspect of that car its family tree is fleshed out with a discussion of 105.16 (Giulia TI Super) and 105.02 (Giulia Sprint GT). From seatbelt webbing to rear axle ratios, you’ll get to know the GTA at an intense level of magnification. The bulk of the photos here is from Alfa Romeo’s archive (a treasure hunt that spawned Dasse’s subsequent crop of Alfa books) and largely not been published before. 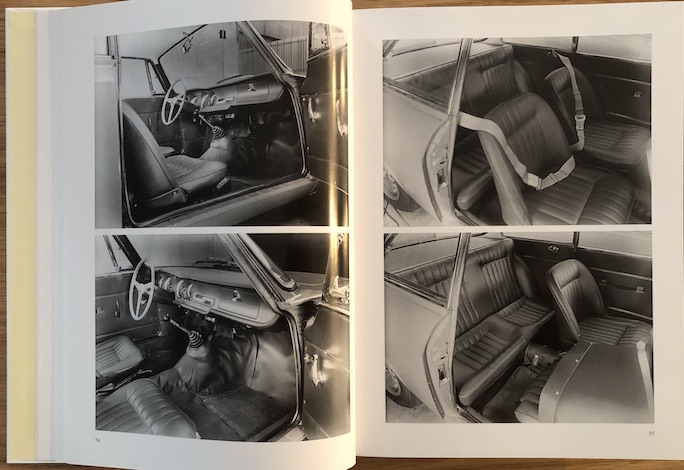 Eighty pages into the book, the coverage switches to “Race History” by model. This takes the form of brief event synopses, quite thoroughly captioned photos from a variety of sources, and GTA race results at select venues. Lots of Trans-Am info too. The results data are not exactly bristling with detail but given the Sisyphus work of having to gather it is a commendable effort nonetheless. All this is interspersed with occasional sidebars by drivers. Vol. 1 ends with an annotated list of engines developed and built by Autodelta 1965–75. If you thought vol. 1 was pretty specialized, vol. 2 takes that to a higher level. 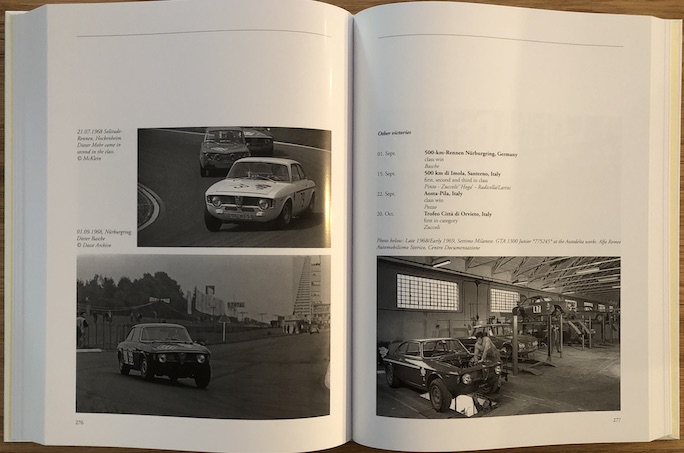 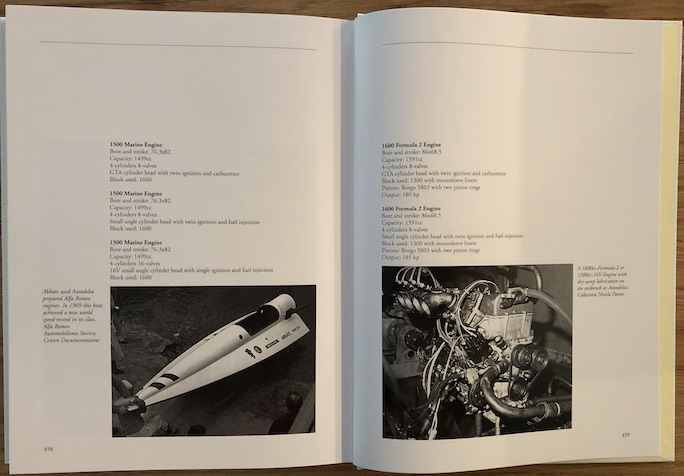 Autodelta built engines for lotsa things—but not rockets; the contraption on the left is a boat.

Vol. 2 will now definitely remind you that you really wish someone had explained who the people behind this book are. What makes them tick?? Why go to such extreme lengths?? This volume is full of source material, meaning reproductions of internal Alfa Romeo material such as homologation files for the various models, reproduced in their entirety, full size (you’ll want to brush up on your Italian), and even the extensions to homologation reports that were required to document modifications. Then there are official tech documents covering everything from torque values to how to align throttle valves—and all of this is in English because these came from a US source that created them on their own reconnaissance in the 1960/70s. And then the coup de grace: photos of every racing part ever produced. Well, there are some gaps, but hope springs eternal that one day every last O ring will have been photographed. Alfa Romeo never bothered to create an in-house catalog and this sort of knowledge used to reside only in the heads of parts and service guys. (In fact, dealers everywhere were expected to have someone on staff who spoke enough Italian to be able to communicate with Autodelta!) Restorers will wear out this volume for sure, although it should be realized that using surviving paperwork to assign parts to specific years of production can be hampered when record-keeping in period (or reconstructed later) was not in synch with real-time practice in the field/shop floor. 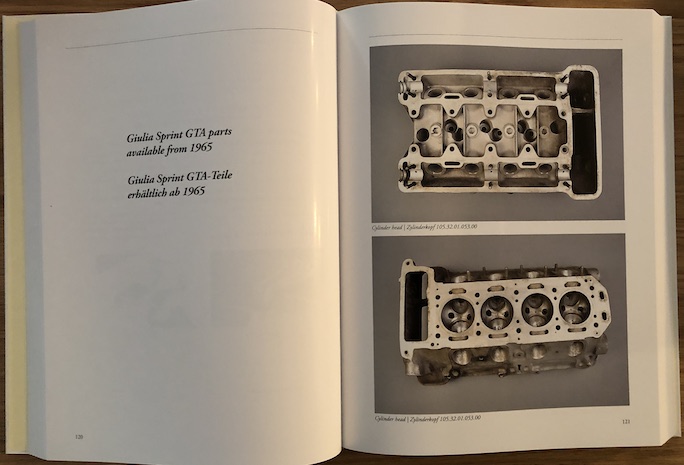 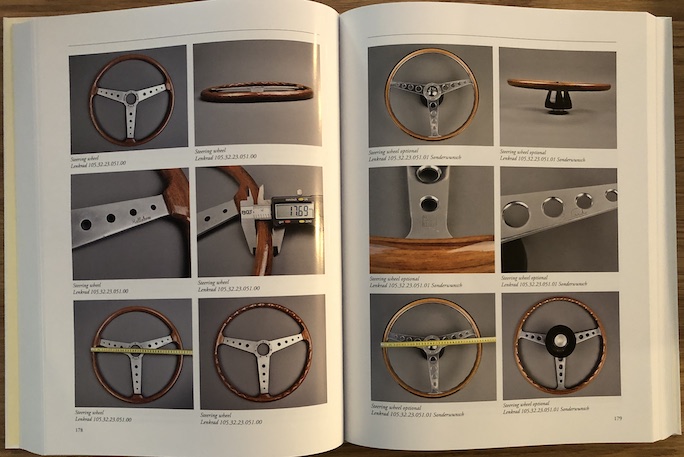 Note the helpful inclusion of calipers and yardsticks.

Vol. 3 is conceptually the most normal: a registry of known and confirmed GTA/GTAJ/GTAm chassis, in numerical/chronological order (but subdivided into models). Those that had competition history have it enumerated by date/event/result. The cutoff is 1981, the year the last homologations expired. The chief data wrangler here is Martin Übelher who had been gathering such info for decades. Also, all sorts of heavy hitters in the Alfa club world have been involved and consulted. 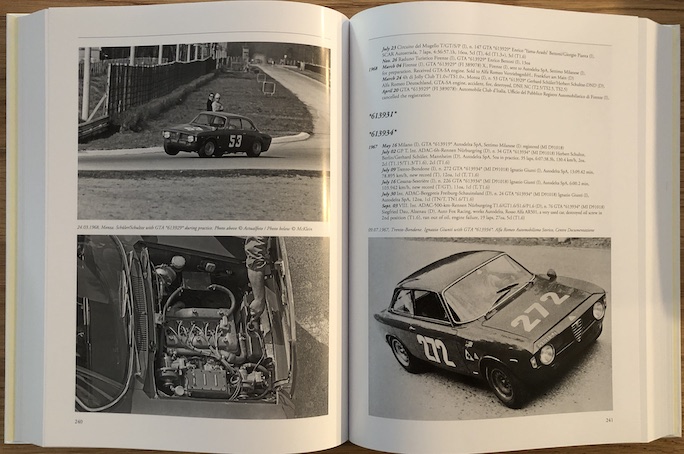 Tp left: one front wheel in the air was a GTA’s normal look. 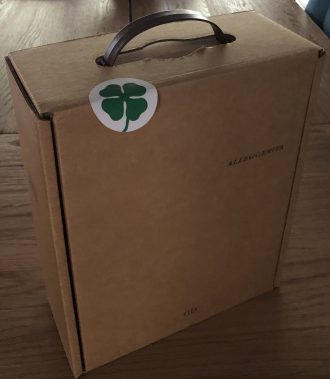 All sorts of useful bits are appended: motorsports governing bodies and their classes/groups, abbreviations, an English/German glossary, and a bibliography. If you find the set second-hand, be sure it includes the two loose supplements of a reproduction Giulia Sprint GTA manual and the handbook insert for the GTA 1300 Junior, as well as an errata sheet. The set number should be stamped on the box (this is not a clamshell or slipcase but a carrying/storage box with handle) which should have a cloverleaf sticker.

Tony Adriaensens likes to say his books “have never disappointed anyone, they’re all extraordinary!” Before you dismiss that as an idle boast, consider that all but one of his six frightfully expensive books have sold out. And as to Patrick Dasse, one can only wish we would blow his horn more! 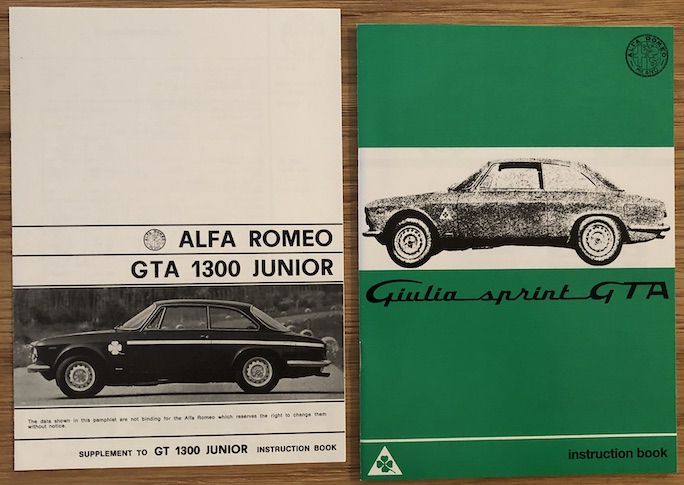