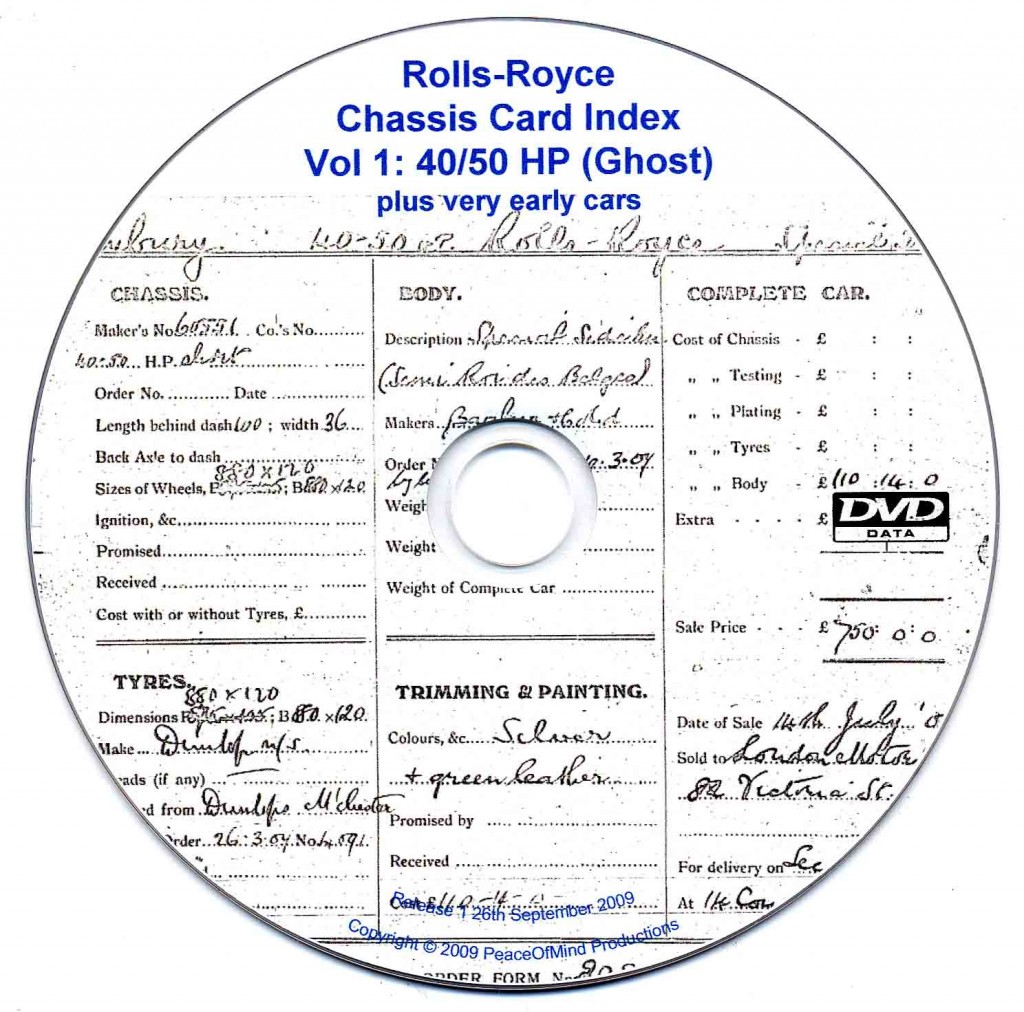 Anyone with an interest in the impact of the early motorcar on culture and society, early automobility, industrial history, or even a Who’s Who of the early 20th century will find in the almost 40,000 Rolls-Royce files on DVD an inexhaustible store of raw data. Rarely do people other than researchers have access to source material like this. Rarer still is it to have such a treasure trove at one’s very fingertips. Unusual among automakers, Rolls-Royce—fully cognizant of its building important cars for important people—kept meticulous records from the beginning and, more importantly, saw to it that they were preserved.

This DVD contains the R-R company Sales Cards for all the pre-Ghost and Ghost chassis. With the touch of a mouse you can now locate any Ghost of the 6,000-odd Manchester and Derby production in seconds. To do this by hand from the original card shelves, holding about 20,000 cards for these models alone, might take hours—or almost forever if the cards are out of place.

You can now find, in seconds, that Silver Ghost chassis 60551 did indeed have silvered fittings. Look at chassis 60558, only seven numbers later, and find that it was ordered by US tobacco king JB Duke. Discover the cost of an early 2-cylinder Rolls-Royce, or that the largest Ghost series by far was that built for the War Office from 1915–1927. Look at the first R-R sold and find it was one of several bought by Paris Singer, the sewing machine company heir.

This DVD is the digitization of microfilms that the company in 1972 permitted the Rolls-Royce Enthusiasts Club (RREC) to make of the original cards. The copy that was given to the Sir Henry Royce Foundation Australia is the source from which members Barrie and John Gillings have commenced the lengthy task of professionally scanning and fully cross-referencing, with really user-friendly software. This DVD is the first of a series that will go up to 1939. Whatever profits there might be from sales will go to the Foundation.

Each R-R chassis generated two cards; one for chassis, one for body. There were also several Works Cards which were filled in at the benches in Manchester and Derby as each chassis took shape from beginning to testing. The latter contain all the technical information, including parts numbers and repairs. Both sets of cards are now stored at the Hunt House, the RREC’s headquarters, whence photocopies for individual chassis can be purchased. This DVD contains just the Sales Cards, from the pre-Ghost 2, 3, 4 and 6-cylinder cars to the last Ghost in 1927, but even so it comprises a staggering 38,699 clear images.

Whereas one had to search through all the film spools to ensure that one had located all the chassis in a series, now the software has them all in correct order, with each locatable from any of seven starting points. And, there’s even a section describing how Kodak set up the 1972 microfilming. Glance through the DVD’s instructions and you can find anything very quickly, with all images coming in perfect screen size and right way up. It’s too easy!

Adapted from a review written by David William Forward for the January/February 2010 issue of The Flying Lady, the periodical of the Rolls-Royce Owners’ Club (RROC/USA). Forward has spent countless hours working with the original cards and films doing research for his Rolls-Royce Silver Ghost book, reviewed elsewhere on this website.