Power Under Her Foot, Women Enthusiasts of American Muscle Cars 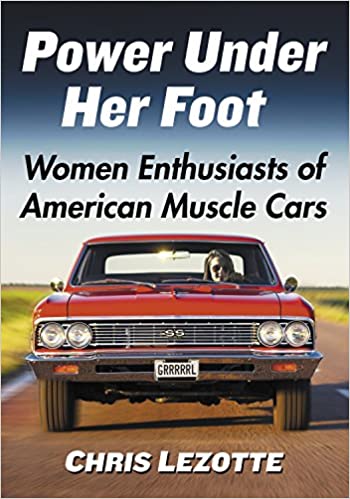 On the acknowledgements pages, author Chris Lezotte writes, “Although I have never been what one would describe as a car ‘nut,’ I believed my Motor City upbringing, coupled with an advertising career that included writing car commercials would serve as a good foundation for scholarship devoted to women and cars.” That’s a statement causing this reader to observe that for a lady who doesn’t think she’s a car enthusiast, her garage houses a couple of cars that give reason to put those words in question. The two cars are a 1967 Ford Shelby GT 350 Mustang, with which she is shown on the book’s outside back cover, and a 1949 Ford coupe sporting an 8 on its spinner.

That is happily the only example of what Lezotte writes in Power Under Her Foot that is even faintly questionable for her book, subtitled Women Enthusiasts of American Muscle Cars, evolved from the carefully researched, annotated, and documented paper that she wrote for her graduate course in gender studies. It then was adapted as a chapter for her doctoral dissertation and, after numerous other papers, became her full-length book published by McFarland & Company. As readers familiar with McFarland know, that means the book is fully indexed and includes a thorough bibliography and chapter notes.

Lezotte describes herself as a liberal feminist. She conducted her study by interviewing some 88 ladies who own and drive American-made muscle cars. Interestingly, each of her interviewees describes herself as a conservative feminist meaning a “pro-life stance, ascribing to traditionally feminine qualities, particularly those associated with mothering, and dismissive of the idea of a struggle against male domination.” Further Lezotte writes, “This ingrained mode of liberal feminist thinking, coupled with a common association of conservatism with the radial religious right, has resulted in a scarcity of scholarship devoted to the conservative woman as a legitimate feminine voice. However, as the examination of this particular group of muscle car owners suggests, the incorporation of feminist values into a conservative worldview is possible.”

This is author Chris Lezotte beside her 1967 Ford Shelby GT 350 that is on the book’s back cover. Photo courtesy Chris Lezotte.

Other books have focused on other groups of females active in other subsets of the culture such as Faster and The Racers (team owner and successful competition driver Lucy Schell), Women Who Ride the Hoka Hey and The American Motorcycle Girls (competitive and leisure motorcycle riders), and Bonneville’s Women of Land Speed Racing to name just a few reviewed on this site.

This book is, to the best of my awareness, the first to focus on female muscle car owner/drivers in a specific geographic area with, as it happened, a shared set of philosophical and cultural values. Thus the book offers readers—especially those who do not necessarily share attitudes in common with the 88 interviewees—to “meet” and learn about ladies with other views as well as “hear” about the cars that are special to, owned and driven by each. Thus, should any aspect of its subject matter—women in the hobby, or muscle cars, or (gasp) the philosophical or political or demographics of those interviewed be of any interest to you, this book is worthy of your time and attention.

Power Under Her Foot