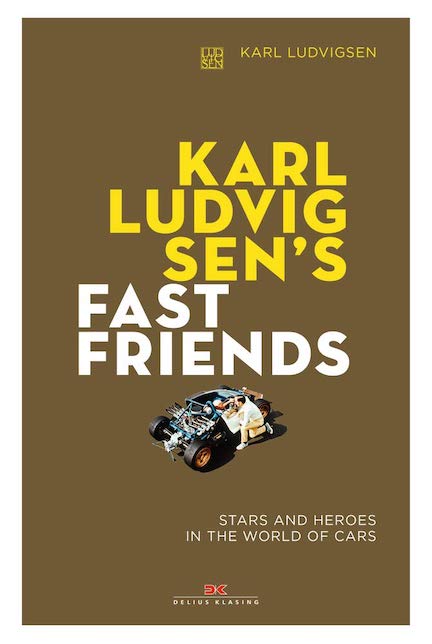 The car guy’s car guy writes a book about car guys. And you really need to read it.

For an amateur hack like me, reviewing a book by Karl Ludvigsen is like asking a short order cook to review a Michelin-starred restaurant. Because Ludvigsen is the car guy’s car guy, the “go-to” man who has worked in the industry for six decades—as designer, consultant, historian, public affairs chief, Fiat and Ford vice president, and as one of the most respected authors in the automobile world. Fast Friends is a collection of profiles and interviews with 23 movers and shakers, broadly categorized into Executives, Designers, Engineers, Racers and, most fittingly, Car Guys. They range from familiar big beasts such as Bob Lutz and Juan Manuel Fangio to lesser known figures like Mercedes Benz’s Werner Breitschwerdt and motorsport photographer Rodolfo Mailander (below). 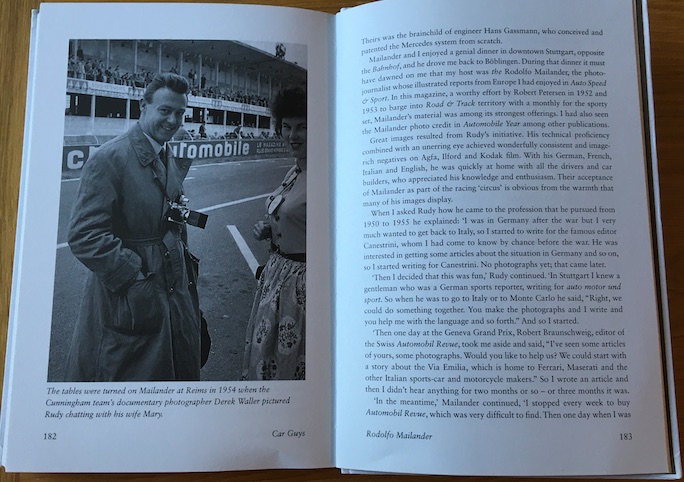 The 191-page book is in softback format (albeit the hardest softback I have encountered), measures 9 x 6 inches and is sparsely illustrated with b/w photographs, a subject I will return to later. The back cover hints at an elegiac theme with its heading “When cars still had combustion engines,” and there can be no doubt that Ludvigsen (b. 1934) and his subjects have lived through the golden age of motoring, the time before the causes and effects of climate change spurred a seismic shift in societal attitudes to the automobile.

Ludvigsen writes with an assured, fluid, and economical style that is sparing on adverbs, devoid of cliché, and always tightly focused on the subject. It would be inappropriate to describe him as a Zelig-like figure but those unfamiliar with Ludvigsen’s prose will quickly learn from this book that the author knew just about everybody who was anybody in the postwar automotive landscape, and on both sides of the Atlantic. Most notably, there are fascinating insights into German automotive royalty featuring, inter alias, BMW “Engine Pope” Alexander von Falkenhausen, Ferry Porsche and the formidable Louise Piëch. I loved these words from her: “I have only ever driven my family’s cars: first my father [Ferdinand Porsche], then those of my brother [Ferry Porsche] and now those of my son [FerdinandPiëch].” 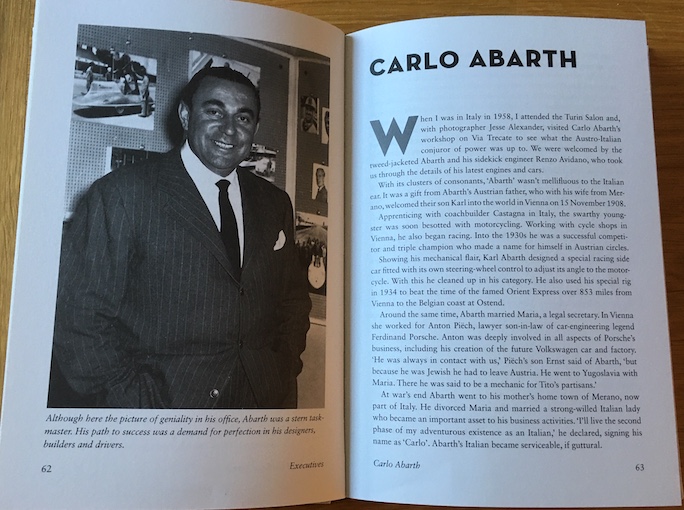 But it is the slightly smaller fish in the sea whose stories resonated most with this reader even more than, for example, the widely known career arc of Giorgetto Giugiaro or the well-honed anecdotage of Mario Andretti. People like the extraordinary Carlo (ne Karl) Abarth; the picture used to illustrate the Abarth chapter depicts a man whose smiling visage doesn’t succeed in altering the impression that here was a man whose natural place was on the set of The Godfather. And as for his story . . . it is utterly extraordinary, from the early days working and plotting with Rudolf Hruska to the merry japes involved in fooling FIA delegates into just how many Abarth Simca 1300s had been constructed. “We needed to show at least 30—and we only had four . . . ” explains Abarth engineer Klaus Steinmetz. 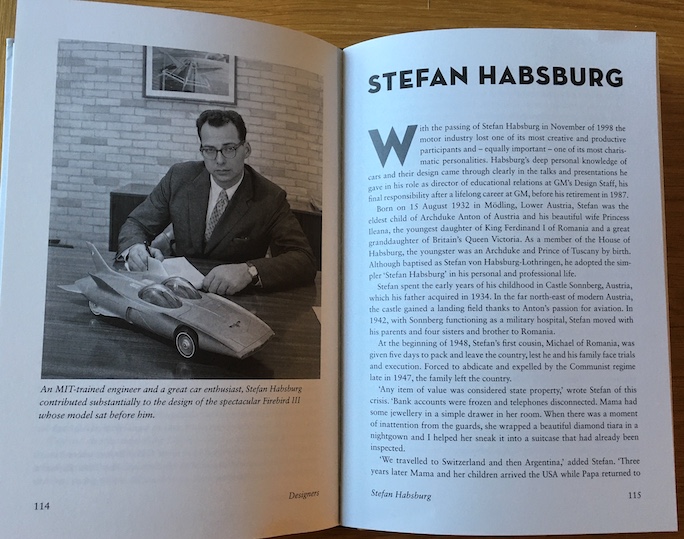 Another man previously unknown to me, apart from en passant references in old copies of Autocar, was Stefan Habsburg (of the eponymous dynasty). His family story, involving escape from postwar Romania to the US via Switzerland and Argentina, belongs to an adventure novel not the biography of a General Motors engineer—“Mama sold her tiara in New York to buy a house in Newton, Massachusetts and clothing for her children.” But equally compelling is Habsburg’s account of “Project VW.” This was the story of how, in 1968, Habsburg and colleagues managed to convince GM’s notoriously short-fused Bill Mitchell just how “. . . something as ‘dumb looking’ as that 1936 design [Volkswagen] Beetle could have such sales success . . . ”

I admire Ludvigsen’s willingness to swim against prevailing tides of opinion, never more so than in the case of John Zachary DeLorean. Hardly a month passes in the United Kingdom classic car press without yet another piece of DeLorean-themed copy making the same old lazy jokes about cocaine stings and quotations from Back to the Future. The reader will learn that DeLorean was a far more nuanced and talented man than the cartoon villain most historical accounts so love to portray. Flawed? Of course he was, his flaws were his downfall, it was tragedy in the most literal sense, but in Ludvigsen’s view DeLorean was also “one of the broadest-based and best-equipped executives ever to walk the streets of Detroit.”  Ludvigsen postulates a theory on why Britain’s then Prime Minister Margaret Thatcher shed no tears (not of sorrow, anyway) at DeLorean’s swift and very public demise. Thatcher’s hometown was Grantham, in England’s East Midlands and, in 1946, a local car building entrepreneur had crashed with huge debts—“Thatcher’s father was the mayor of Grantham. He would have been in the midst of the fallout.” If nothing else, it’s food for thought, no?

This is a short book, but its diversity and insight mean that it punches a long way above its modest weight and low cost. Fast Friends is in refreshing contrast to the current prevalence in the automotive market of absurdly expensive picture books for the well-heeled elite. And so it is ironic that I do have one observation, perhaps even criticism, of this book’s illustrations—and that is simply the fact that when one reads about half forgotten but important cars in the chapters on such luminaries as Giugiaro or Larry Shinoda, the reader is distracted into stabbing his or her iPhone to remind him or herself exactly what the Bizzarrini Manta or Mercury Turnpike Cruiser looked like. (But I didn’t need to check the appearance of Giugiaro’s sublime Gordon Keeble, because nobody who has ever admired that combination of elegance and muscle could ever forget that stunning shape.) The pictures that are used—usually just one per chapter—are well chosen and my favorite of them all is of the then 25-year-old author sitting on the wide sill of his Mercedes 300 SL, somewhere in the Rocky Mountains. I suspect he felt near immortal on that far-off day, and his confident smile suggests he also might have had an inkling of what adventures lay in store for him in the coming decades.

I am sure that Karl Ludvigsen spent more time deciding who not to include in this slim volume than who should be included. Knowing something of the circles in which he moves, it cannot have been an easy decision to exclude colossi like Dan Gurney, Jim Hall or Colin Chapman, who have all been the subjects of Ludvigsen books. But perhaps especially in the case of Chapman, how can an author convey that multi-faceted and flawed genius in a mere ten or fifteen pages? Far better to buy Ludvigsen’s 400-page opus Colin Chapman: Inside the Innovator, by far the best work on the Lotus founder.

So far as Fast Friends is concerned, if you are a car guy, then just buy it, ok ? Because it’s terrific, and near essential reading.

Ordeal by Ice: Ships of the Antarctic »
« 70 Years of Porsche Sports Cars