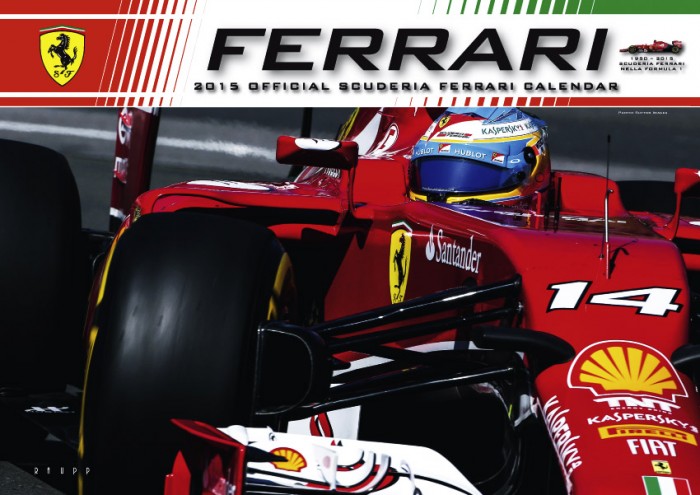 For the hardcore Ferrari fan with racing interests, a calendar like this is a no-brainer. Everyone else may need some convincing . . .

This being the “Official Ferrari Formula 1 Calendar” you know it has both the blessing of the company and is, well, “on message.” Not that 2014 had much of a message except “survive!” It was such a bad year that Fiat SpA chief Marchionne called it “unacceptable,” removed the Ferrari chairman from office, and installed himself in the hot seat. 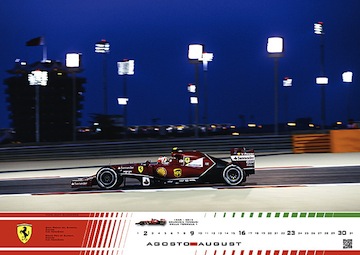 But, even in a strong year, the photos in these calendars are almost interchangeably generic. Except for technical features on the car, or possibly a new sponsor decal, you couldn’t tell from the photo what year it is. They are good photos in technical terms (this time around by Frits van Eidik, Jean-Francois Galeron, Drew Gibson, Darren Heath, Dieter Mathis, Sutton Images) and they’re obviously well reproduced on high-quality glossy 170 g art paper (generously sized at 23.4 x 16.4 inches / 60 x 42 cm), but they have no real unique storytelling aspect. Even in purely documentary terms they don’t zero in on the truly specific for a given year. 2014, for instance, saw the first-ever race in Russia—but there’s no photo. Yes, it was one of the most boring races of the year but that circuit is right smack in the middle of an old-timey residential neighborhood and seeing space-age colorful race cars fly by shingled rooftops and creaky chimney stacks ought to have yielded a clever photo! 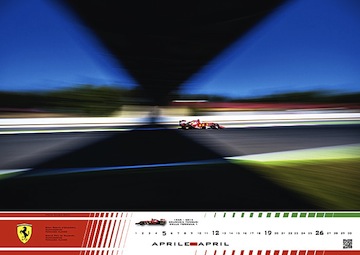 This year’s principal drivers were Kimi Räikkönen and Fernando Alonso and you’ll see them here at a ratio of 4:8. The photogs couldn’t have known at the time they took the photos that this would be Alonso’s last year with Ferrari (he is moving to McLaren for 2015 while Vettel takes his seat at Scuderia Ferrari). 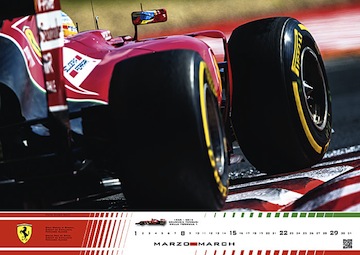 According to the press release, the photographers “have chosen their best shots exclusively for this calendar.” Here’s what they offer:

12 monthly pages and an overview page