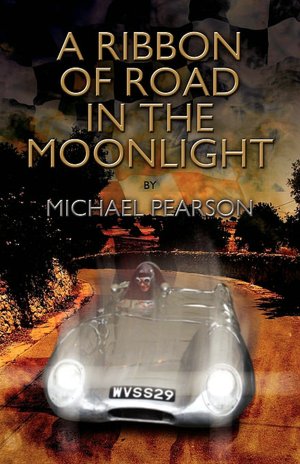 “The wind was a torrent of darkness among the gusty trees

The moon was a ghostly galleon tossed upon the cloudy seas

The road was a ribbon of moonlight over the purple moor

And the highwayman came riding,

The highwayman came riding, up to the old inn-door”

Is there a connection between that famous 1906 poem and this book? Not really, but a 1995 BBC poll found it to be Britain’s 15th favorite poem. Here it presumably applies to the night stage of the Targa Florio road rally which is the main event this novel builds up to.

In a nutshell: The era is the 1950s; British underdog boutique sports car designer/chassis builder seeks to better his firm’s fortunes by racing—and winning—against the big drivers, big companies, big cars, big budgets of his time. Anyone familiar with actual period road racing of the day can fill in any number of names here and paint a picture.

Any David v Goliath story comes with “built-in” drama and tension and, more often than not, an outcome that is not surprising even if the specific steps (here, to name a few: love interest/s, industrial espionage, the Suez canal crisis, a lead driver with a secret history, sponsors that want a piece of you) along the way may well be. Looked at strictly in terms of dramatic arc, character development, pace, general plausibility, and ability to hold one’s attention, these 250 pages do tick those boxes.

A novelist, more so than a nonfiction writer, leads a vulnerable life—and a reviewer must be mindful and respectful of that, and temper undue subjective criticism. UK author Pearson is no stranger to the written word, having penned several historic books on naval matters as a result of an almost lifelong interest in ships and a professional career in shipping. Another great interest of his is motor racing, and not just as a spectator! He raced Formula Ford and touring cars at the amateur level and is thus able to imbue this first effort at fiction writing with seats-of-the pants realism. And if this book were entirely fictional, this review could be much more straightforward. But as soon as real-life verifiable historic events become building blocks of a work of fiction, all sorts of issues of micro detail rear their head, leaving the reviewer unable to form an opinion whether the writer just didn’t know better or simply took artistic license.

Let’s look at a few examples: the racecar has a normally aspirated 3L V8 with 300 bhp output. It is said to rev to 18,000+ rpm. Now, this is not impossible but just not typical for that era and that type of car and therefore not likely. Also, p. 81 gives this number as a top limit only to exceed it three pages later! The imagery of a racing driver “flipping up his visor” [p. 64] is perfectly normal to today’s observer but examine period photos and you’d be hard-pressed to find such helmets. (In fact, in our reviews of such books we never fail to point out that the photogs of the day were only able to get the kinds of up close and personal portraits because drivers’ faces were not hidden behind visors!) A rather more annoying issue pertains to Brands Hatch [p. 60 ff], a circuit the author has himself raced at and whose history it should be easy enough for him to ascertain. Our fictitious car is being tested here, in 1956, and the circuit is described as “Mickey Mouse” (p. 86; it was called that, but not until 1967), “new” (hardly: first opened in 1928), and owned by the BRSCC (never: owned until ca. 1960 by Brands Hatch Stadium Ltd. formed in 1947, next Grovewood Securities). And would a Japanese tire manufacturer really offer an untested no-name racing team an exclusive deal? And just how do front wheel weights cure oversteer [p. 66] better (if at all) than any of the fixes the rest of us know about—shocks, suspension, tires, wheel geometry, adding weight to the front end/lightening the rear etc.? And how can there be “faired-in headlights” set into “undulating wheel arches” [p. 7]? Surely, he means fenders or, in British parlance, wings? Etc. etc. etc. . . . Even non-car bits are iffy: the Elvis Presley song Jailhouse Rock couldn’t have been on the radio in 1955 [p. 13]—because it wasn’t released until late 1957 in the US and early 1958 in the UK.

Add to that a bunch of typos, misuses (pedantry on our part but true nonetheless: no Londoner, and Pearson is a native, would spell its financial district “The City”—with a cap “T”), punctuation anarchy, and continuity errors (just how do you get engaged to be married [p. 11] without having popped the question which doesn’t happen until the last page of the book??) and you have plenty to distract from an otherwise really readable yarn that is also cheap enough to be a guilt-free indulgence unless you count your time as valuable.

Incidentally, since the publisher seeks to bask in the halo effect of quoting gushingly positive reviews on their website (Motorsport News: “. . . you’ll find plenty to enjoy” and Southern Car Club Magazine: “recommended fun read for any petrolhead, and pretty accurate”) we are moved to comment that surely these folks did not actually apply their minds to this book.