Battle for the Beetle 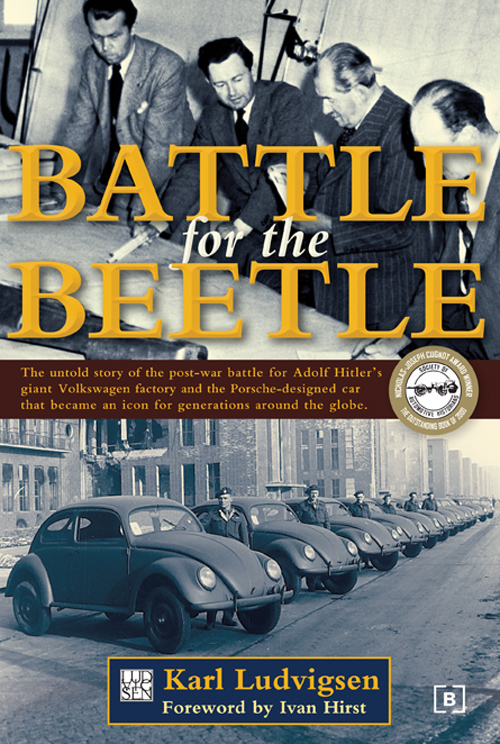 If you are wondering why the man synonymous with Porsche literature is writing an entire book about the lowly V Dub you’ll need to remember that the Beetle is a significant part of the Ferdinand Porsche story and a building block in the pre-history to the Porsche Cars story. As such it is mentioned in his Porsche books often enough, but, of necessity, only in passing. This Beetle book, then, fills an important gap for Porsche readers and, thanks to Ludvigsen’s research, materially advances the Volkswagen story.

The subtitle, if this much verbiage can be called that, says it all: “The untold story of the post-war battle for Adolf Hitler’s giant Volkswagen factory and the Porsche-designed car that became an icon for generations around the globe.”

Normally you have to wait a year of two for the paperback version of a hardcover; in this case it took 13—and it’s the same price. (Actually, factoring in inflation, it is cheaper—better brush up on economic theory because it is a big part of this story!) Moreover, this new paperback edition contains important new material.

The hardest book to write is the one about a subject that everyone thinks they know everything about. Whether your interest is in cars or biography or business matters or politics/society, this book connects many dots. It cannot be overstated how radical the Beetle was, both in function and philosophy. No wonder that mighty Ford was very interested in merging the VW plant with the German Ford operation. This little nugget probably took a look of folks who thought they knew all about VW history by surprise when the first edition came out. (Ludvigsen even reveals the identity of the Ford functionary who dropped the ball on this.) Instead the British took over postwar management. Ludvigsen deconstructs the oft-repeated fallacy that after WW II the Allies underestimated and dismissed as irrelevant the potential of the Beetle. His research into previously unpublished material shows the opposite to be the case—hence the word “battle” in the book title.

At the time of the book’s first publication, Ludvigsen was still chairman of the London-based motor industry management consulting firm Ludvigsen Associates with its vast archival holdings (now part of the Revs Institute). The book is very complex but still eminently readable. It begins with an assessment of prewar people’s car concepts in several countries, with particular emphasis on rear-engined proposals; it examines political, technical, and economic angles; it compares postwar manufacturing logistics and quality control among various makers. A closing chapter begins with the New Beetle of 1994 and discusses the many, many influences Beetles over the ages had on other cars. The book is, in other words, no less than a sweeping, competent overview of carmaking in the 20th century.

The new material in the paperback edition is an Afterword (“The Ivan Hurst Contribution”) that talks about the young British major who so successfully held the reins at VW until 1949, putting the firm on a sustainable path to growth. He was already 81 when Ludvigsen first met him in 1997 and died the very year the book came out. Much more important is the addition of callouts in the body copy that refer to the Endnotes that had already been included in the first edition but were rendered pretty well pointless because they could not be matched to the text. Even if you have the first one, this alone makes the new edition an absolute must.

Cleverly, the main body of the new edition has the same pagination as the old one, which, having become a crucial reference source is being quoted by many other works. All those page references would have become unfindable if author and publisher hadn’t recognized this important detail.

Deservedly won the SAH’s Nicholas-Joseph Cugnot award Best Automotive Book of the Year in 2000. It was and it is.

Battle for the Beetle