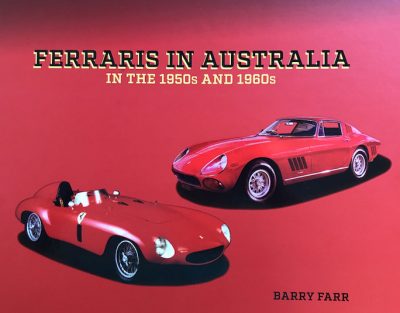 During the Fifties and Sixties, over sixty Ferraris arrived upon the shores of Australia. Some stayed, while others moved on. Thanks to Barry Farr’s book one can now rest easy in the knowledge that each and every single one of these Ferraris—there were sixty-five of them according to Farr; I didn’t count them—recorded here. Limited to 299 copies and published as an obvious part of the celebration of Ferrari’s seventieth anniversary as a car company, it will fulfill the perceived need for such an esoteric volume on the marque.

It fits nicely on one’s coffee table, being produced in a landscape format, spanning all of 30 x 12 inches when opened up for browsing. It is printed on high-grade art paper and contains 530 photographs of the various Australia Ferraris—again, I am taking Farr’s word for it. I will say that the quality of the reproduction of some of the photographs, including those of obviously very recent vintage, at times leaves much to be desired, their resolution having me check my glasses on more than a few occasions. I was also struck by the lack of a bibliography or of any other reminder of the five years of research that Farr devoted to the tome.

As mentioned, Farr attempts to provide some sort of comment or in some cases the provenance (at times in great, even numbing, detail) and, when possible, a photograph (or more than a few in many instances) of each and every Ferrari to reach the Land Down Under, from the first in 1952 to the last one to arrive during this period, in November 1969. For those interested in the presence of Ferrari in Oz during these years, it is obviously a gold mine of information. Farr’s attention to those Ferrari racing machines to reach the Land Down South in particular struck me as being quite informative. Then, of course, it would, wouldn’t it?

In a world where bookshelves are straining under the weight of the many tomes written on Enzo Ferrari and his cars, does the world really need Ferraris in Australia in the 1950s and 1960s? For Ferrari completists, of course, absolutely! For others? Perhaps. Perhaps not. That said, it is certainly a striking book to be residing on one’s coffee table when friends pop over for a visit. It will definitely get their attention.

As an aside, it was interesting to realize that I actually saw at least two of the Ferraris in the book—in period, no less—during my first visit to Australia some many years ago, one of them being a 250LM belonging to David McKay. I have a yellow Post-It making that entry, by the way. The other was a street Ferrari, parked outside the garage with the 250LM.