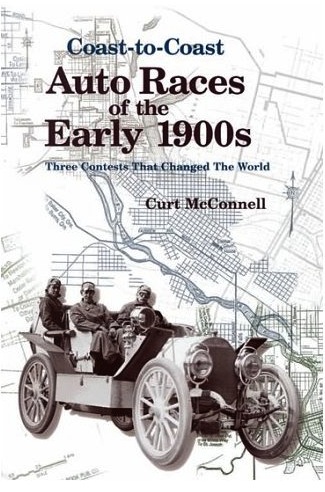 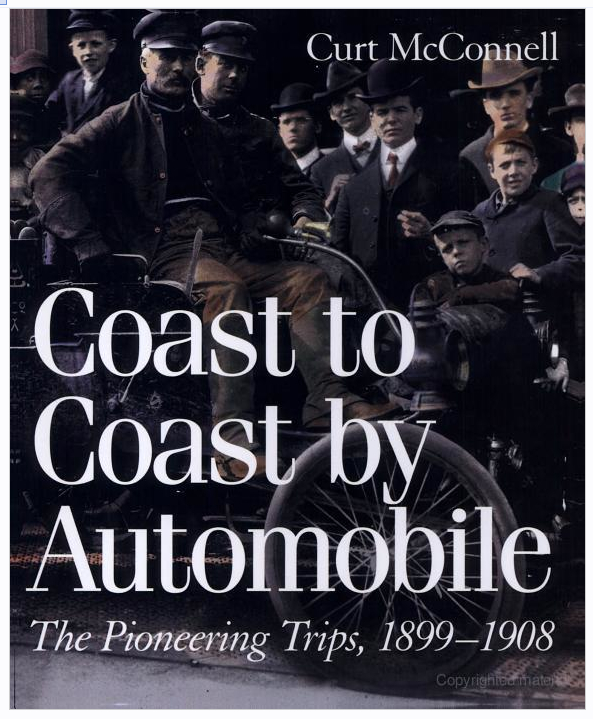 Coast to Coast Auto Races of the Early 1900s: Three Contests That Changed the World

Historian McConnell, a journalist by trade, feels that just like Lewis and Clark who blazed the trail from St. Louis to the Pacific Ocean and are revered for it to this day, so the autoists of the Pioneer Period deserve tribute. More than track races, hill climbs, or even the AAA’s Glidden Tours (1905–14), it was the long-distance transcontinental drives that demonstrated the car’s unique potential as durable, versatile transport. Although there is no argument about the validity of this point there had been little written about the trips in the way of an organized account until McConnell put pen to paper. He argues that historians have failed to examine the impact of transcontinental trips because the very plentitude of scattered and often inexact period newspaper reports and other snippets made the research too difficult and time-consuming.

Published within a month of each other and similar in scope and approach, McConnell’s books overlap chronologically but without duplicating contents. The first book deals with eight endurance trips whereas the second book explores three competitive long-distance contests, hence the word race in the title.

This distinction is not entirely satisfactory and divining the author’s intention in dividing the contents across two books in this manner is not helped by the fact that neither book mentions the existence of the other! Yet both include a reference to McConnell’s previous book, Great Cars of the Great Plains, which had won the AACA’s 1995 Thomas McKean Memorial Cup for historical research.

The author, with the help of a long list of librarians and researchers, has dug his way through newspapers, magazines, letters, diaries, and other, previously overlooked or unknown, primary sources to reconstruct the events. By going the extra mile, his reexamination of the record has weeded out many of the factual errors and conflicting versions of earlier literature. All sources are identified and elaborated upon in extensive chapter notes. In Trips, the author also clearly explains his modus operandi for computing drive times and distances. In cases where the record cannot be reconciled definitively McConnell points out the discrepancies rather than ignoring them. In addition, the books are said to be “the most complete photographic record ever assembled.” All these features elevate them from rollicking good read to reliable reference work.

Perhaps indicative of the two publishers’ different target audiences, it may be of interest to point out that visually—no criticism intended!—Trips (Stanford U.) is the prettier book with a more generous layout and less austere design; Races (SAE), despite covering fewer events, has a significantly deeper index. Readers already familiar with the 1908 NY–Paris race should note that McConnell covers only the American leg.

The photos invite an interesting comparison to, for instance, Elizbeth Bennet’s mammoth book Thousand Mile Trial 1900 that had taken place in England. That event, although of similar groundbreaking nature, took place on a much smaller piece of real estate, always within walking distance of some sort of civilization—and on actual roads, something sadly lacking in the United States of the time. McConnell shows us photos of a tiny speck of a car in a vast dessert surrounded by, overwhelmed by miles and miles and miles of tumbleweeds; or of men clawing their way through sagebrush in search of water. Heroic efforts, indeed, and almost unimaginable today.

The pioneering cars are the Wintons, Packards, Franklins, and others. From the first journeys of 60–70 days duration at little more than bicycle speed to the 5-day trips by 1916, these events turned the car from novelty to necessity and advanced its evolution. Establishing the car, in turn, made possible the growth of entire industries and infrastructures. Consider: In 1899 the commentary of the newspaper sponsors of the first-ever transcontinental attempt by John and Louise Davis had changed from a euphoric “A Race that Fills with Wonder the Eyes of the Civilized World” to an acerbic “Bust of the Century!” when the trip had to be aborted half-way because the lack of roads caused incessant repairs. In 1905 the USDA joined the Olds Motor Works in promoting a race “to show the crying need for good roads.” And in 1913 a private organization created the Lincoln Highway—and nothing has been the same since.

Leave behind the world of heated steering wheels, run-flat tires, Global Positioning Systems and let these excellent books take you back to Ground Zero.

The Sociology of Elite Distinction: From Theoretical to Comparative Perspectives »
« Sidecar Scooter