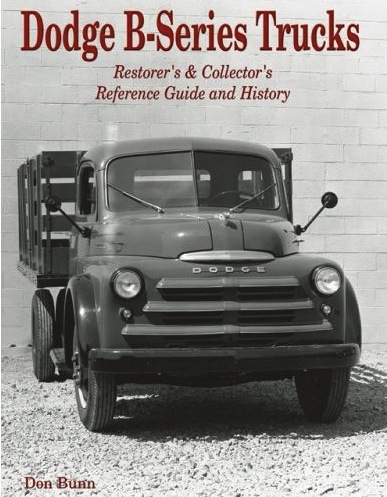 There was once a time when pickup trucks were commercial vehicles; workhorses used by businesses small and large to move whatever needed to be moved. These vehicles were simple, rugged, unadorned and dependable. Just as with a tugboat or a locomotive, styling was almost always a secondary consideration to the task at hand and extra options simply took away from the maximum payload the thing could haul.

After World War Two, Ford and Chevrolet dominated the truck market. Dodge was a player, but its trucks were usually priced $25 to $50 higher than the competition, an amount that was enough to lose a sale. In 1948, Dodge introduced its new B-Series that provided more interior room with a bigger cab, tight and precise steering due to an 18-inch steering wheel, and a set-back front axle. Dodge would never match Ford and Chevrolet in sales numbers but the B-Series was an attractive alternative. The B-Series was built between 1948 and 1953 at just one plant in San Leandro, California and was available in light, medium, and heavy duty models.

Don Bunn’s passion for Dodge B-Series trucks was fueled by his purchase in 1973 of a 1952 half-ton pick-up, a vehicle that he still owns. He became a charter member of the Light Commercial Vehicle Association (LCVA) and quickly found that there was little or no information available to someone who wanted to rebuild or restore an old B-Series truck. His search for relevant information about what each vehicle should have looked like as it left the factory is embodied in Dodge B-Series Trucks: Restorer’s & Collector’s Reference Guide and History.

The first thing I learned, in the fourth paragraph, of the first page, of the first chapter is that the word pick-up, with a hyphen, was only used for ½ ton trucks. The ¾ and one-ton models were called an “express” which was term used throughout the industry. The next thing that I learned is that the B-Series light, medium, and heavy duty Dodge trucks came in a bewildering array of models and bodies that included several cab variations and the possibility of pickup, express, panel, stake, and platform beds. There were engine options, axle options, and choices for springs, shock absorbers, wheels and tires. Fortunately, Bunn is well on-top of these variations and his book is filled with sharp black and white photographs to help guide the uninitiated through the possibilities.

Although there are probably a few truck historians who will devour every page and specification table, Dodge B-Series Trucks will more likely be used by a prospective buyer or current owner of a Dodge truck who wishes to judge how authentic a vehicle might be. Here is where Bunn’s book is invaluable. Where else could you go to find out that for 1951 the hood prop that was formerly located on the radiator to dash tie rods was now fastened to the firewall? Nowhere that I know of…

Bunn’s writing is serviceable, the tables are clear, precise, and well-organized, and the archive photographs (mostly from Chrysler), show interesting models such as fire trucks, dump bodies, and panel delivery trucks. But it is pick-up trucks that are hot right now and just leafing through the pages of this fine reference book will have you checking the used car section of your local Craigslist to see what might be available.

Posted Under: Automobiles, History, Out of Print, Trucks and Buses, US | Author: Kevin Clemens | 1 comment