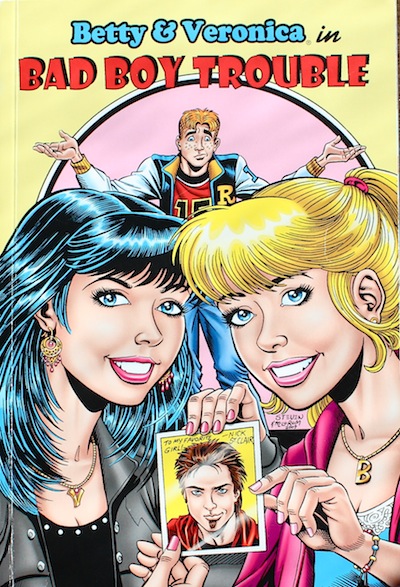 This is volume 1 in the “Archie New Look Series” and combines several installments of the Bad Boy saga first published between July and October 2007 based on the 1991 juvenile novel Bad News Boyfriend.

Your recollection of reading Archie comics is of a bumbling yet very likable Riverdale redhead who is always in trouble because of his simultaneous infatuation with Betty Cooper, the blonde girl-next-door and Veronica Lodge, the dark vixen, the spoiled rich girl. Riverdale (most likely the one in Massachusetts from where its creator hailed) is: High school varsity, classroom detentions, Pop Tate’s Chocklit Shop, The Bijou, Main Street USA, the beach in the summer and the slopes in the winter. Riverdale is: Reggie Mantle, the perennial smart aleck; Moose Mason, the dim jock; Midge Klump, Moose’s long-suffering girlfriend; and Jughead Jones, Archie’s best pal who through the decades has gotten the boy out one scrape after another. At Riverdale High School, the ever exasperated Principal Waldo Weatherbee presides over Miss Grundy, the Teacher of English, Mr. Flutesnoot in the Science Department and Mr. Sevnson, head of maintenance. Ah, such an idyllic Rockwellian town, such a sweet American dream. 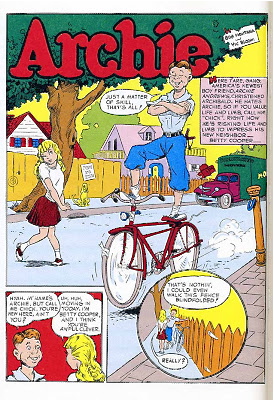 The author, Melanie Morgan, obviously had her ear to the ground! But wait! Melanie Morgan is really one of the many pseudonyms of Michael Joseph Pellowski (b. 1949), a former professional football player no less (New England Patriots 1971–1973). He did work as a teacher—art, phys ed, and philosophy—for a time and has published widely in a number of genres, so he does have a legitimate claim on understanding his protagonists.

As there is a DC Comic Universe (The Batman, Superman, The Flash) so is there an Archie Comics Universe. Although their universe is much more circumscribed than that of the superheroes, Archie and his gang have appeared on Saturday morning TV, in 1969 had a top 40 hit, Sugar Sugar, and in 1980, with live actors, the Archie gang starred in Archie: To Riverdale and Back Again (released on video as Archie: Return to Riverdale): Archie, Veronica, Betty, Jughead, Ethyl, Midge, et al, return to Riverdale for their 15th high school reunion. Veronica has been divorced several times, Jughead has become a psychiatrist, and the gang must save The Chocklit Shop. There are at least a half-dozen titles in the Archie comic book series, and Sabrina the Teenage Witch and Josie and the Pussycats also inhabit the Archie Universe. 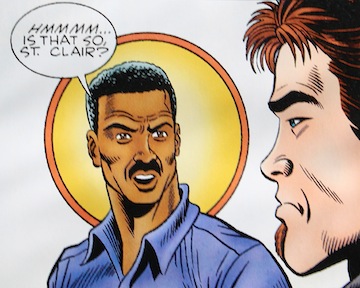 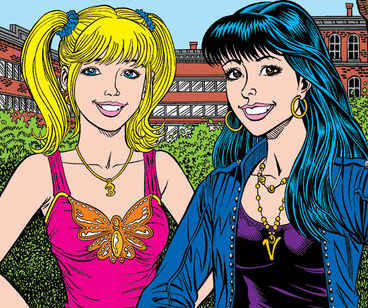 By the 1990s Archie has undergone noteworthy and praiseworthy changes. Riverdale becomes integrated as African-Americans, Asians, and Hispanics join the core Caucasian group. 2011 produces the now infamous inter-racial kiss cover, Archie and Josie sharing a romantic moment. In 2010, one Kevin Keller is introduced, a gay teenager, out of the closet, loved and respected by his parents, teachers and friends. In 2009 Archie finally graduates high school, then college, and he marries Veronica—and Betty. In each of the two separate series, the marriage plays out, with its good days and bad. The plotlines and the characters have matured significantly. In one sequence, Veronica is caught having an affair with Reggie. And the artwork has also changed. The Marriage series is penciled and inked in what the franchise calls the New Style, a more realistic rendering that puts one in the mind of the romance comics of the 1950s and 1960s.

Comparing this New Style with the traditional look, which also had evolved over time since Archie’s 1941 introduction, is like comparing the friendly, daylight Batman drawings of the 1950s with the 1970s grim, realistic artwork of The Batman as The Dark Knight. Bad Boy Trouble is in the New Style. 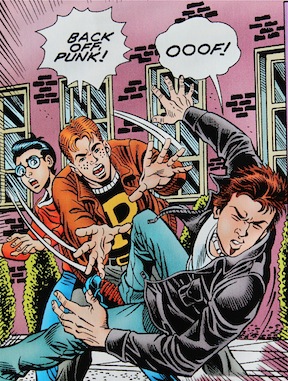 The blue monochrome title page depicts Veronica and Nick St. Clair in an impassioned embrace, a deep kiss, very unlike the traditional cartoon peck with the accompanying floating red heart icons. Nick is new to Riverdale High, with his motorcycle, black leather jacket, soul patch and decidedly bad attitude. Veronica falls hard for him and on their first date Nick violently protects her from a pair of hoods. Nonetheless, Nick is disliked by all but Veronica. He is rude to teachers, dishonest, devious, and, while dating Veronica, he makes a play for Betty. He and Archie wind up in a boxing match, Archie getting a black eye after the final bell. All her friends can readily see what a creep Nick is, but for Veronica, love is blind. The plot, although effectively formulaic, has enough twists to sustain interest. In the end, Nick’s true character is revealed and the bad boy is sent off to a military school; the gang is once again reunited in their abiding mutual friendship, and in the last panel, like in many a mediocre sitcom, the story ends with a joke and a smile. This is, after all, a comic book universe, so should we be so cynical as to hold much disdain for the tidy, upbeat wrap-up? Bad Boy Trouble establishes a depth and complexity to the Archie franchise that would have been unthinkable since before our twenty-first century. The target audience? Tweeners? Middle School girls? Boys? Or, I cannot help thinking, long-time fans like myself who appreciate and applaud how far, and how good, the Archie Universe has become.