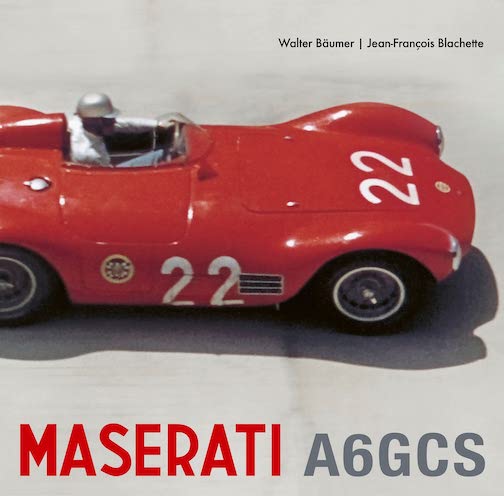 “The powerplant of the A6GCS with its 2-liter and inline 6-cylinder was a true jewel and a perfect motoring concept. The basic design and the inline specification became famous many years later with BMW in its 320 type, and BMW seemed to be so impressed with the A6GCS engine that it copied details of its valve train design for their BMW RR motorcycle in 2009!”

You may think you already have a book about this car by this author. Yes and no. Bäumer has indeed already written about the A6G, two books in fact (2013 and 2021; plus one about the 300S for this publisher) but that was about the A6G2000 whereas this one is about the CS, as in Corsa & Sports. There are several more variants in this model line so Bäumer could keep going for a while.

Bäumer must be a no-nonsense sort of fellow because all his books have that “jump right in” pacing where the most perfunctory of introductions leads straight into meaty expositions of minutia, in this book starting with Technical Development. Or maybe he just pegs his audience really well—considering that especially this model of Maserati was built in such exceedingly scant numbers, hard-core readers, not to mention owners, will surely already have a suitable frame of reference and won’t need to be told a very great deal of backstory.

In the overall scheme of things, the CS, and all the dedicated racing Maseratis are what gave the firm luster but, later, Maserati would make the strategic choice (well, Bäumer will call it a mistake) of devoting their limited funds to only the luxury market and abandoning their racing heritage. 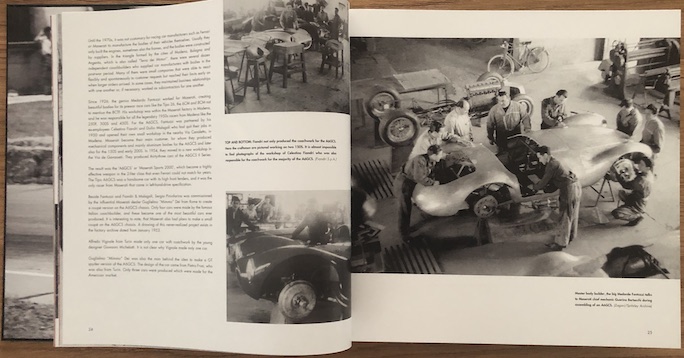 This book begins with the first generation of A6GCS cars, which are not the topic of this book but only serve to introduce the evolution that was the Gen 2 iteration of the A6GCS. Those 54 chassis (2040–2110), plus one mystery chassis are described in this book, one at a time. This takes the form of build/owner/race histories, with plenty of cross-referencing among chassis where applicable, accompanied by plenty of illustrations. Between the two of them the authors have many thousands of photos in their archives so there is a high probability that a good deal of what’s shown here is new to the printed record.

As to the photos one can only say that the reader has to put in the effort to get the most out of them because the captions are brief. For example, you may be shown photos of the same chassis but perhaps you spot on your own that the car’s features are different from one to the other. In most cases you will now have to search pages of text to find an explanation for this. Also, not all the photos are dated, or only by year, so if you seek enlightenment from the listings of race results you would find that there often were several races in the same season at the same venue, in which case it is only the car’s race number that can link a particular photo to a particular race. Except, often enough the tables only have a “?” in lieu of a race number. Given that the layouts mostly have space to spare, Bäumer could have sprinkled a few more words around to give the reader a leg up. (Bäumer, formerly a professional fashion photographer and art director, is once more credited with his book’s design.) Besides, he, the expert’s expert who not only founded the consultancy International Research Maserati in 2008 but also brokers these (and similar) cars would have a vested interest in easing more people into the fold. 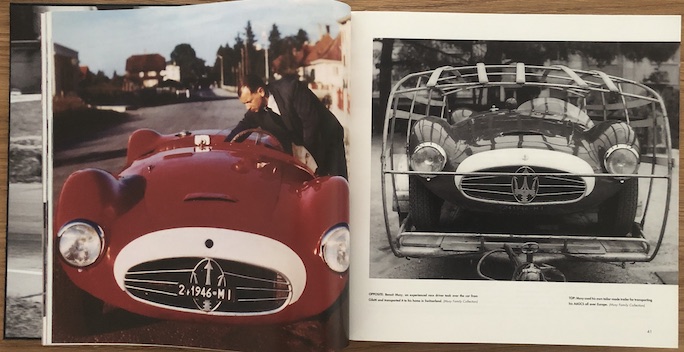 Lightweight car on lightweight trailer. This contraption is home-built. Guess they had to push the car in.

The book jacket text, which may not have been written by Bäumer, refers to the A6GCS as “perhaps the most romantic Maserati racing car of all time” by which is probably meant that this era of racing was one of transition and still populated by amateur drivers, which in the case of the A6G means wealthy drivers. Interestingly, the car sold best in its native Italy with only five coming to the US as new, this despite Maserati beating the PR drum pretty much only in that market but not in Europe.

This book, or rather this review is a perfect example of the best books needing the fewest explanations: there is no ambiguity about what they do and how they go about it, they fill gaps in the existing literature and advance the body of knowledge, they are a precision tool for a precision job and those who need it will embrace it as indispensable. It is a solid book. The end.

Oh, it has a properly deep, multi-faceted Index divided into cars, people, and a rather unusual category: track history by chassis, see photo below. Elsewhere there is a smallish section of mini bios of some of the personalities relevant to this story, and, rather buried in the “Coachbuilders” section a handy table of chassis by coachbuilder. (Not called out on the TOC so unless you come across it on your own you’d never know it’s there.) 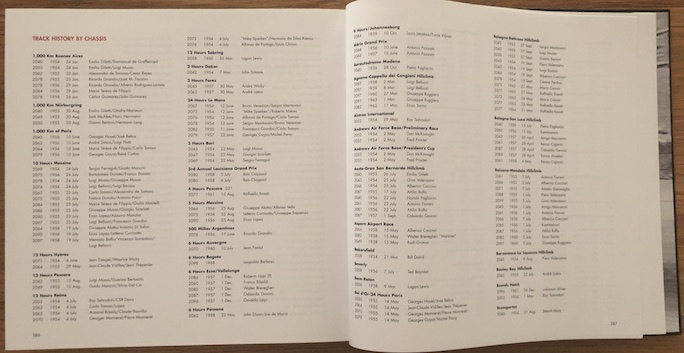 Lastly, American readers probably do require a few words about coauthor Jean-François Blachette. He is one of the early members of the Club Maserati France, becoming its VP in 2015, and also serves as the club’s historian, ambassador, and editor of its fine magazine, Modena. He coauthored with Michel Bollée the quite massive 2019 book Maserati In The World Sports Car & Manufacturers Championship From 1953 To 1966 for Syllabe Editions, ISBN 9782490726035, only 600 copies. To appreciate just how big a Maserati enthusiast this former auto industry exec is consider that he, upon realizing that no one was making certain Maseratis as 1/43 models, launched his own company, JFB Models whose every new release is eagerly awaited and discussed by collectors. 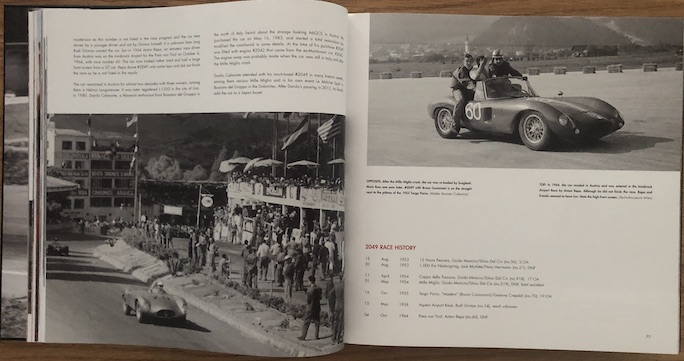 An example of the race history included with the chassis descriptions. This one happens to be unusually short but the reason we picked this page is the photo on the right. How many people can pile into an A6GCS?

Think you’ve never seen an A6GCS? You may not have known it but there’s one in the Elvis Presley movie “Viva Las Vegas”! Although it kinda doesn’t count because at that time #2062 had a Chevy V8 motor in it. Better: if whatever chair you’re sitting in now has a seatbelt, fasten it—you’ll be leaning into the curves!—and catch a YouTube video of an A6GCS being put through its paces by Jim Stokes Workshops Ltd., an important British restorer and maintainer of historic race cars. (There are obviously lots of other videos but this is the one with the best sound and motion.) 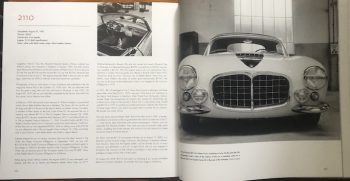 Random Rumination     In many cases, period prices are mentioned (although neither related to buying power nor current value, and also in various currencies, so you have to do your own mental math) but why then not also list current prices, say auction results? One example: A reader 30 years from now will have a hard time reconstructing that chassis 2110 (shown here), at the 2018 auction that is referenced in the text, fetched $5,170,000 (incidentally, below its $5.5–6.5 million estimate). And why the coyness about “an architect from San Diego” being the buyer? It’s no mystery who that was . . . (privacy concerns are legitimate—but he shows the car on his own website and social media for crying out loud, and owns multiple A6Gs). In terms of documenting all known owner history at the time of writing this sort of thing doesn’t quite fit the brief for a book that in other regards is reference-level.