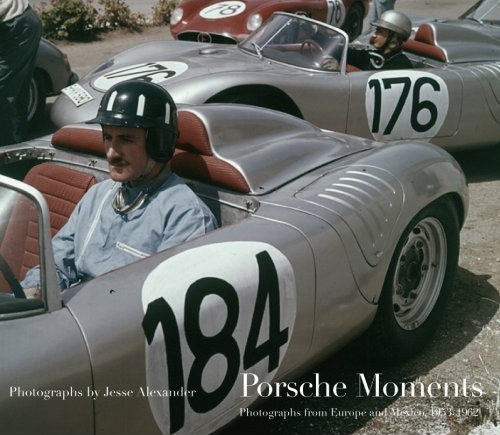 To anyone with a love of motorsport at the time we have come to think of as the sport’s golden age, names of photographers like Alexander, Cahier, Klemantaski, Goddard, and Rowe are household names. That they should have had such impact is partly because they simply bothered to show up. Not many did, in those days. In a world that still bore the scars of World War Two, newspapers and magazines were only just beginning again to build up a readership for motor racing and to dispatch correspondents. To Americans especially it was the images their countryman Jesse Alexander sent home that connected them to European racing. Attracted to the budding sports car movement in the US he cut his teeth photographing the Pebble Beach, Golden Gate Park, and Palm Springs races. Thanks to an inheritance from his mother he was able to pay his own way to cover the 1953 La Carrera Panamericana and the next year install himself in Europe, where the big-time racing in those days took place, for a decade.

Precisely because so few Americans covered racing professionally, Alexander became a veritable fixture at races. Driving his own Porsche to the same circuits as the teams he basically lived the same nomadic life. The utter lack of safety-mandated restrictions to access allowed him—and anyone—to move about freely and get close to his subjects. He made it a point to know everyone’s name, not just the drivers. The people in front of the camera came to know—and more often than not like—the man behind the camera. Celebrating and commiserating with them fostered an unguarded candor that is a key factor in the types of images Alexander was able to capture and that early on distinguished his work, especially the portraiture. For Homo sapiens a crucial tool for interspecies rapport is the ability to see and “read” another’s face. The open-faced helmets in use in that era allowed Alexander to capture emotions that in turn engage the viewer—unlike the modern-day full-face helmets that, in the absence of other telltale body language, make anyone look as unapproachable as Darth Vader.

Another key aspect of Alexander’s work is his interest in capturing motion, often by keeping the moving object in sharp focus and making all its surroundings blurred. This is true even of his animal/nature photography today. All this is amply illustrated in the book (and likewise in its sister publication, Ferrari Grand Prix Moments). In the Foreword Alexander’s friend and contemporary Dan Gurney relates his two seasons of racing for Porsche. This is followed by an Introduction in which Alexander explains his interests in and influences on photography. Only fleeting mention is made of his equipment—a Leica M2 and later a Rolleiflex—but we know he used normal or short telephoto lenses and Super XX and Plus X film. (A short telephoto lens sees an image similar to the way the human eye sees. Such a lens causes minimal distortions when shooting close-ups.)

As the title indicates, the focus is on Porsche which was making a big splash on the racing scene in those years with different models in various series. The content of the book is divided by event (La Carrera Panamericana, Le Mans, Mille Miglia, Monte Carlo, Nürburgring, Reims, Rouen, Targa Florio, Zandvoort). There is no narrative other than the detailed photo captions. Little to no information is given about the events proper and the reader who might want to see, say, a circuit’s layout or read about its history will want to have a copy of Grand Prix Battlegrounds by Christopher Hilton (Haynes, 2010) to hand. In addition to the racing images there is an assortment of snapshots of Alexander’s travels along with anecdotes and reminiscences.

One of this book’s important assets is its size and landscape format. Even at the generous width of 13 inches several photos cross over the gutter but in only a few cases does this cause loss of important/interesting image area. Quite a few images have a black satin surround but it is surprisingly fingerprint-resistant. The book format, incidentally, corresponds quite closely to the smallest of the three sizes at which Alexander offers his original gelatin silver prints on Bergger multigrade fiber glossy paper, each individually processed by hand and signed. Some of the photos here have appeared already in Alexander’s other books but not at this size. Readers with a deeper interest in photography will want to pick out (by racing number) those cars that are shown in both color and b/w and ponder the esthetics. For the sake of the aspiring photographer who looks at this book so as to learn it would not be unfounded to remark that from a strictly technical and compositional perspective not all of the photos in this collection are fully realized. This does not diminish their allure, which lies mainly in the fact that they exist at all, their documentary nature, and their off-the-cuff immediacy.

Make a habit of looking under the book jackets—you may want to leave this one off!

Readers who like signed books can get one directly from Alexander at the regular retail price, or a Publisher’s Edition of 300 individually numbered copies signed by both Alexander and Dan Gurney at $135 (the first 50 of which in garment-quality leather at $249) from the publisher. Won Ippy Silver Medal 2006.

Races, Faces, Places: The Motor Racing Photography of Michael Cooper »
« Ford in the Service of America: Mass Production for the Military during the World Wars